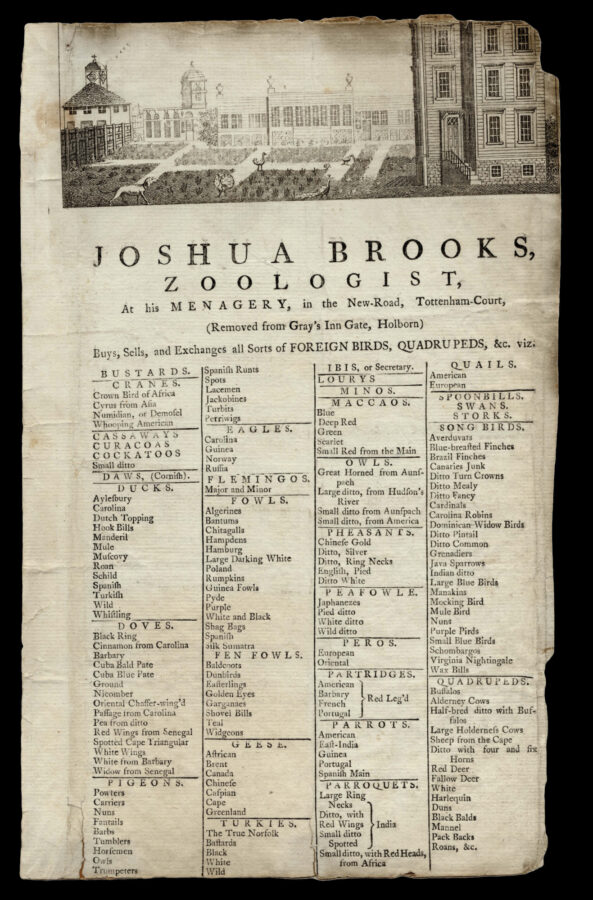 Z is for Zoologist

Joshua Brooks [sic], Zoologist, at his Menagery, in the New-Road, Tottenham–Court (Removed from Gray’s Inn Gate, Holborn). Buys, Sells, and Exchanges all Sorts of Foreign Birds and Quadrupeds, &c. viz.

The menagerie of Joshua Brookes (died 1803), which first appeared in Gray’s Inn Gate in 1760, was a large and elegant establishment filled with exotic animals brought back from the far reaches of the globe, catering to the polite tastes of a new urban elite seeking suitable leisurely activities. Brookes (who should not be confused with the anatomist of the same name who had a menagerie at Blenheim Street) remained in the family for at least two generations.

The broadside shows a beautiful garden, in which peacocks and other birds live happily alongside an unidentified ​“quadruped”. The buildings have large windows looking out onto the garden, presumably housing the less trustworthy animals. About one hundred and fifty different species of bird is listed and another fifteen quadrupeds.

Brookes made a handsome living selling his exotic animals, and one of the earliest references to his business is an advertisement for the sale of birds from Bengal and America from his first menagerie at Gray’s Inn Gate, Holborn, in 1763. In about 1765, Brookes moved his establishment to Tottenham-Court, where he also began to collect, grow and sell exotic plants. In 1772, the King’s botanist, William Young, sent large quantities of plants and seeds to Brookes from the American colonies. The largest consignment included ​“several thousand flowering shrubs, trees, bog plants, ferns, seeds, acorns and cones for planting in gardens or preservation with stoves — including orchids and the Venus flytrap” (Plumb, ​‘Exotic Animals in Eighteenth-Century Britain’, 2010).

By the late 1770s Brookes had opened another menagerie at the Haymarket near Piccadilly, managed by Mary Cross, widow of John Cross, Brookes’s original business partner. The menagerie at Tottenham-Court Road was sold in 1813. One of Brookes’s younger sons, Paul Brookes, established a menagerie on the New Road, St Pancras, that continued into the 1840s. 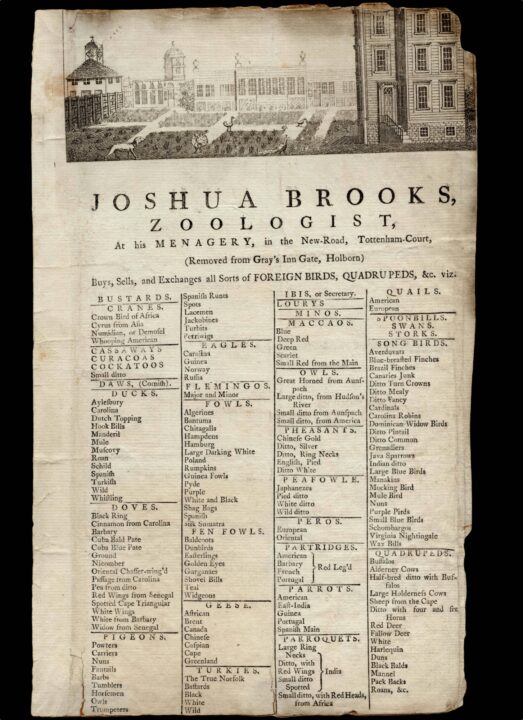