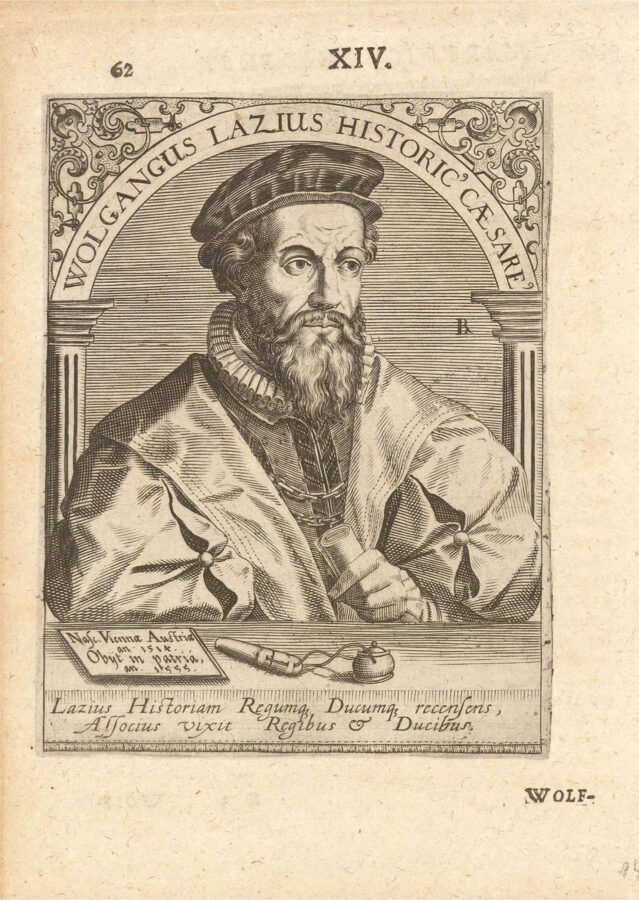 Born in Vienna, Lazius (1514 — 1565) became a professor of medicine at the University of Vienna at 27 years of age. He is best known, however, for his work on cartography and history, which he. authored while in the position of official historian to Emperor Ferdinand I. This position gave Lazius access to documents in libraries, monasteries and private collections across Europe, some of which he was rumoured to have stolen. His most important work was the ​‘Typi chorogrpahici privinciarum Austriae’, which resembles a historical atlas but which was clearly intended as a celebration of Habsburg rule. His maps of Austria, Hungary, Tirol and Istria were included among those adapted by Ortelius for his ​‘Theatrum Orbis Terrarum’.

Multiple portraits of Lazius were made during the sixteenth century, the most famous being Giuseppe Arcimboldo’s ​‘The Librarian’, an early example of abstract art in which his figure is composed of books. In 1598, Johann Theodor de Bry reengraved a portrait of Lazius originally produced by Philip Galle in 1567. It shows the seated cartographer in a ruff and gown, holding a furled document in his left hand. De Bry added ornate framework above Lazius, and Latin text giving his dates of birth and death, and outlining his role as the royal academic. The present examplle was included in Jean Jacques Boissard’s ​‘Bibliotheca Chalcographica’ in 1650.