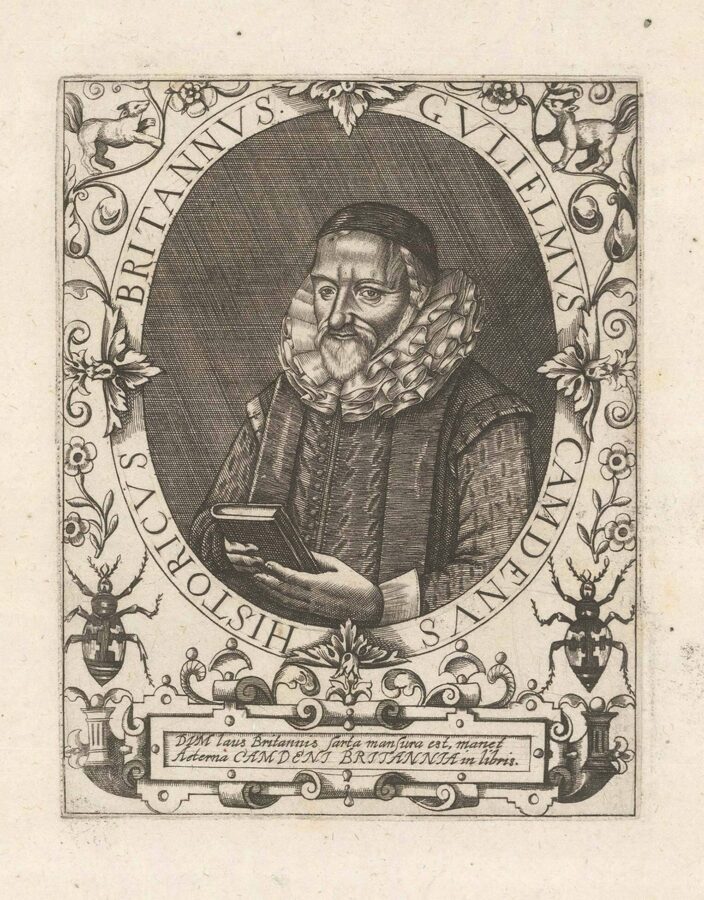 William Camden (1551–1623) was an English schoolteacher, historian, author, topographer, herald, and antiquarian. Despite holding the position of Head Master at Westminster School from 1597, it was for his hobby that he became celebrated: Camden travelled all over England, collecting historical and antiquarian information and eventually assembled his findings into a book, ​‘Britannia sive florentissimorum Regnorum, Angliae, Scotiae, Hiberniae chorographica descriptio’ (1586). Later editions of Camden’s ​‘Britannia’ contained the earliest series of county maps readily available to a collector. The work proved hugely popular, was translated into numerous European languages, and solidified Camden’s status as a historian.

Camden’s portrait was engraved by Johann Theodor de Bry at some point during the first two decades of the seventeenth century, and like many of de Bry’s engravings, was later included in Boissard’s ​‘Bibliotheca Chalcographica’ (1650). The half-length portrait shows Camden in three-quarter perspective, wearing a tall ruff and a skull-cap, and holding a book. This image is set within an oval frame reading ​“Guliemus Camdenus Historicus Britanicus”, which is surrounded by various native flora and fauna including roses and beetles. A cartouche beneath the portrait contains the sentence: ​“Dum laus Britannis sarta mansura est, manet aeterna Camdeni Brittania in libris” (‘While praise for the Britons remains good, let the eternal Camden’s Britannia remain among books’).