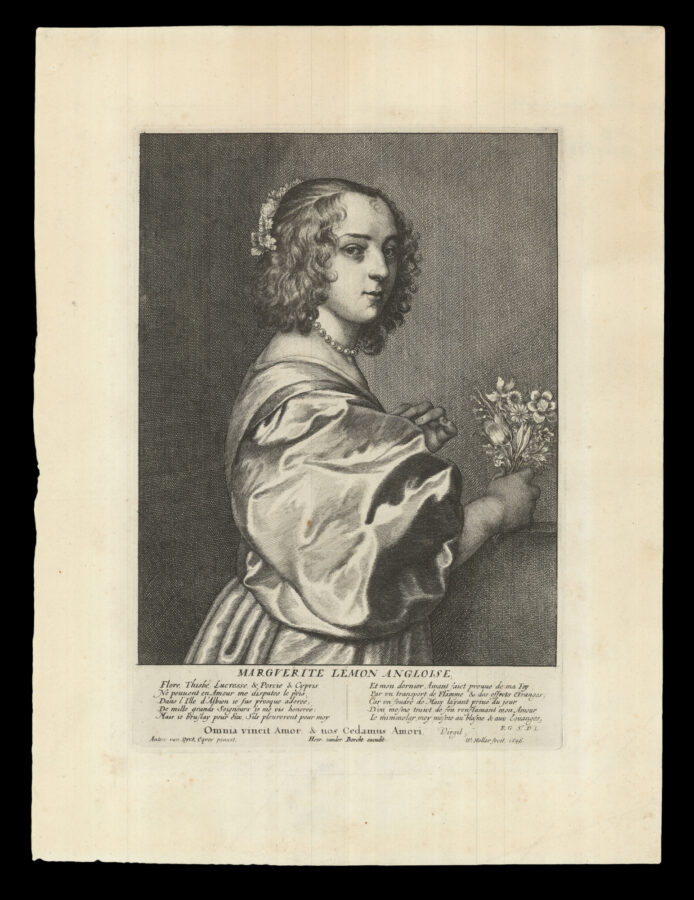 Son and student of the German painter Hendrik van der Borcht the elder, van der Borcht II joined Wenceslaus Hollar as part of the artistic retinue of Thomas Howard, Earl of Arundel, and soon became close friends with the engraver. After van der Borcht turned to publishing prints and dealing art, the two worked in collaboration on several projects. Among these was an album containing 92 portraits of European women, both famous and anonymous. Included among these was an engraved print by Hollar of Marguerite Lemon, or Leman, after her lover Anthony van Dyck.

​“Nothing is known about [Lemon’s] early life, upbringing and education before, at some point during the 1630s, she became Van Dyck’s mistress. James suggests that the relationship probably began around 1632–33 during the painter’s second stay in London, from 1632 to 1641, while Lemon was still in her teens, and that she remained his mistress until, it must be assumed, his marriage to the aristocratic Mary Ruthven. This took place in February 1640… Lemon would have enjoyed a life of luxury and privilege during her stay in Van Dyck’s lavishly maintained household, where Charles I and his courtiers were welcome visitors.

Frequently quoted comments by two contemporaries are the source of what little is known of Lemon’s life and character. Hollar, an admirer of Van Dyck, and in England from 1637 to 1644, is reported to have claimed that she was a ​‘dangerous woman’ and so jealous of Van Dyck’s unchaperoned female sitters that ​‘in a hysterical fit’ she once threatened to bite his right thumb off in order to wreck his career…

Other evidence for Lemon’s life comes from works of art. James claims that she appears in so me twelve paintings by Van Dyck, arguing that the number of times he chose to paint her portrait and the length of time she also acted as his model is indicative of her impact on his art… The first of these, dated by Millar to c.1638, is the original from which Hollar’s etching derives, as well as a number of later copies and versions by other artists. A head and shoulders portrait, it depicts Lemon in the fashions of a lady of the court: her shoulder-length hair is wavy and curled and she wears a pearl necklace and silk gown as well as a garland of red flowers and a jewel in her hair. Although he portrayed her as the epitome of youth and beauty, Van Dyck also depicts her – looking back over her left shoulder at the spectator – with a certain self-assurance; she has a will of her own. Her glance conveys an intimacy and close relation- ship between sitter and artist: as Millar writes, the painting was ​‘probably always designed to be a very personal and private work of art’.” (Maddicott)