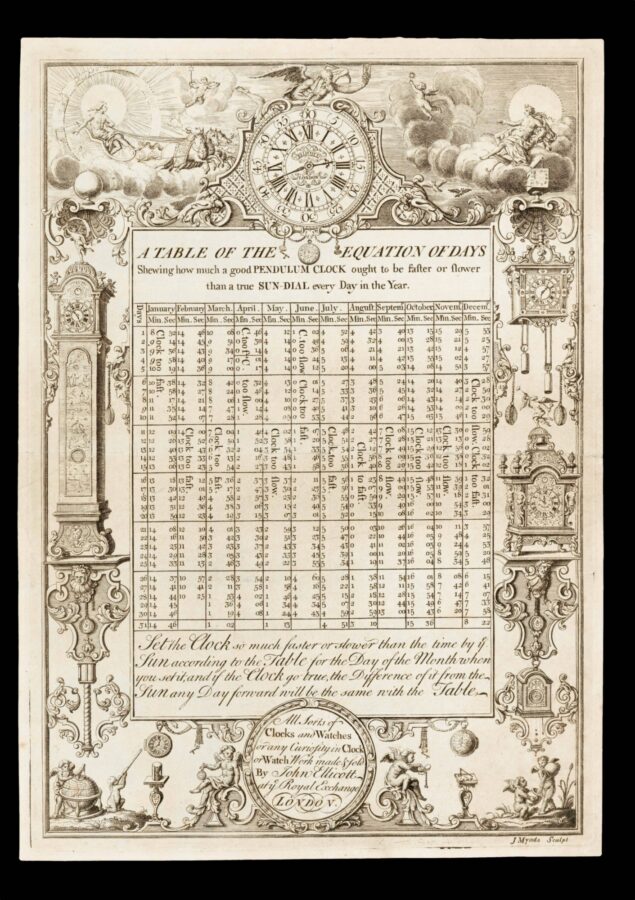 W is for Watchmaker

A Table of the Equation of Days Shewing how much good Pendulum Clock ought to be faster or slower than true sun-dial every day of the year.

Son of an eminent horologist, John Ellicott set up an independent watchmaking. business at Austin Friars Street in East London, before moving to more central premises at the Royal Exchange. His work on temperature compensated pendulums and use of the cylinder escapement won his election to the Royal Society in. 1738, and also led to his appointment as Clockmaker to George III from 1762. He also had business with King Ferdinand VI and the Spanish Royal Court.

The present advertisement was made for Ellicott by English engraver James Mynde, and is centred on a large table giving the ​“equation of days shewing how much a good Pendulum Clock ought to be. faster or slower than a true sun-dial every Day in the Year”. The earliest diagrams of pendulum clocks were those made by Leonardo da Vinci in the 1490s; the following century Galileo made breakthroughs in regulating the swing of the pendulum; and un 1656, Dutch polymath Christiaan Huygens designed and built a new and more reliable form of the clock. Throughout the rest of the seventeenth and the eighteenth centuries, a number of horologists contributed to the development of the devices, which were by far the most accurate timepieces until the invention of the electric clock in 1840.

Nonetheless, they still had their flaws, which tables such as Ellicott’s were designed to remedy: an instruction beneath the table instructs the reader to ​“set the Clock so much faster or slower than the time by ye Sun according to the Table for the Day of the Month when you set it”. Surmounting the table is an ornate clock with both Roman numerals and Arabic numbers. The table is likewise surrounded by all manner of timepieces, including a grandfather and carriage clock. In the upper corners, time itself is represented by personifications of day and night, the former riding before the gleaming sun in a chariot, the latter reclining on dark clouds while a putto ignites the surrounding stars. Further putti at the bottom of the plate are shown using a variety of scientific instruments.