Vincenzo Coronelli (1650–1718) became a celebrated Italian cartographer and globe maker, but started as a novice in the Franciscan Order at thirteen. Thirty-five years later he became the Father General of the Order, as he appears in this portrait, but was removed from office three years later by the Pope, after complaints from fellow clerics.

An early commission for two globes for the Duke of Parma brought him to the attention of the Cardinal d’Estrées, who summoned him to Paris to create two huge globes for Louis XIV. They each had a diameter of fifteen feet, and were built with trapdoors so they could be worked on from the inside. He was made royal cartographer to Louis XIV in 1681 as a result, and worked in Paris for two years. He collaborated with Jean Baptiste Nolin, who went on to become the French publisher for all of Coronell’s work. On his return to Venice, Coronelli was made cosmographer to the Republic, and granted a stipend of 400 florins a year. Coronelli founded the world’s oldest surviving geographical society, the Accademia degli Argonauti, named for Jason and the Argonauts, the adventurers who set out to find the golden fleece; their symbol was the globe surmounted by a ship in full sail.

The present portrait was included at the beginning of his ​‘Corso geografico universale, o sia la terra divisa nelle sue parti e subdistinta ne’ suoi gran regni’, first published in 1692. It shows Coronelli in a hooded robe, using a pair of compasses and a globe. His image is set within a trompe l’oeil, with three winged putti in the foreground surrounded by books, documents and cartographic instruments. 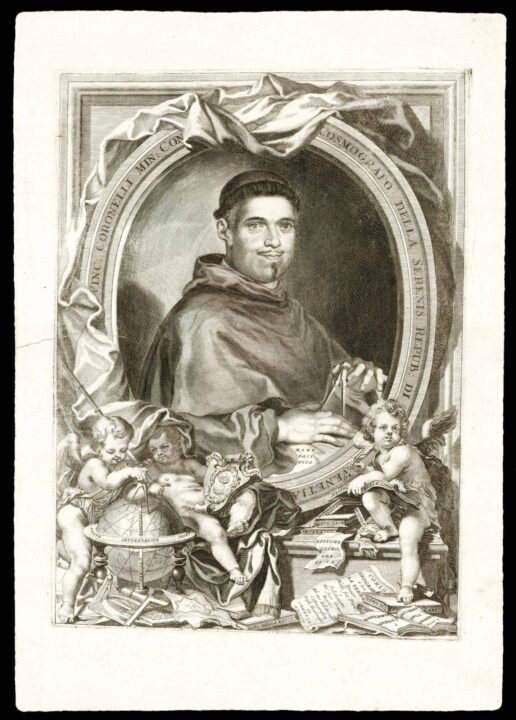