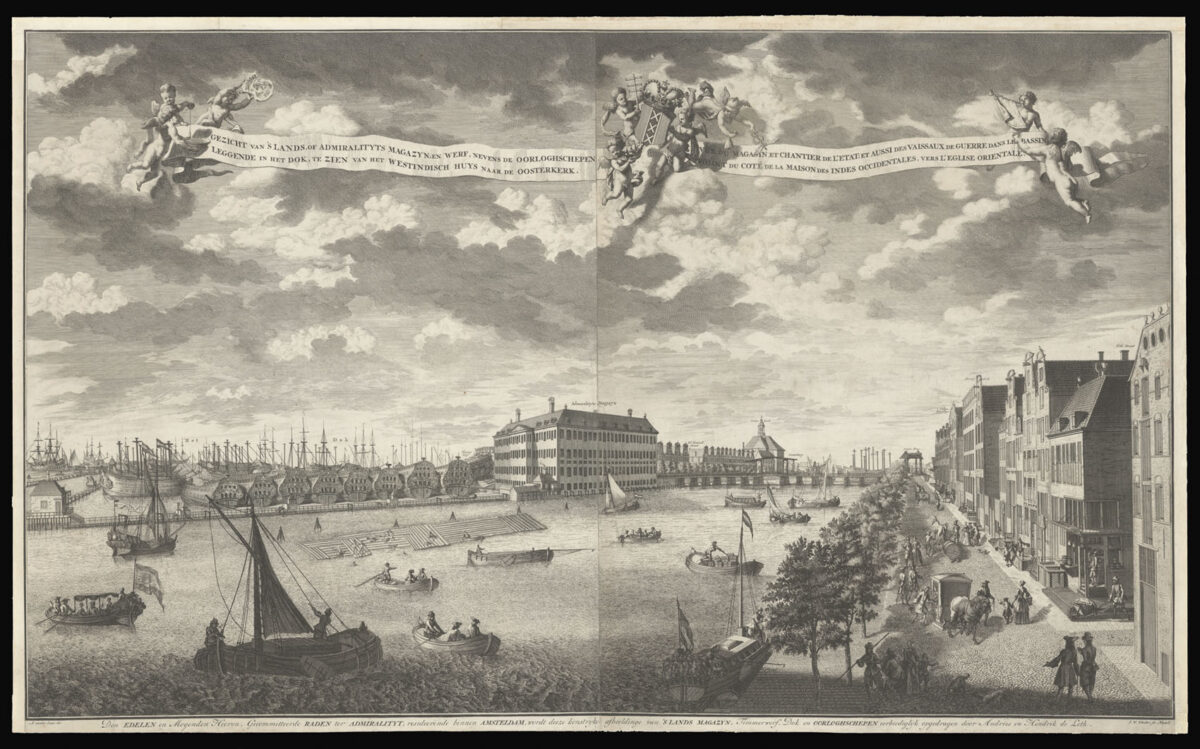 A view along the what is now Prins Hendrikkade (Prince Hendrik quay) with the Zeemagazijn (now the Scheepvaartmuseum) and the naval shipyard to the left and the Oosterkerk to the right.

The views shows off the might of the Dutch Navy with numerous ships of the line in the dockyard. To the right of the dockyard stands the ​“Admiralityts Magazyn” or Zeemagazijn the Dutch navy’s arsenal. . On 12 August 1655, the Admiralty was given the entire western strip of Kattenburg island for the construction of a warehouse and timber-wharf. The designs for which where drawn up by Daniel Stalpaert, in the Dutch Baroque manner.

In 1791, a great fire broke out and charred the entire building. Instead of breaking it down and constructing a new arsenal in its place, the decision was made to plaster the building to imitate sandstone, giving its distinctive white look it has today. After the French invasion in 1795, the Dutch Admiralty was disbanded and a national navy was formed, the function of the arsenal changed as well. It no longer stored cannons, ropes and gunpowder but clothing and food. After the French left, the building was given to the newly formed Dutch navy and would stay that way until 1973. The building now houses the Nederlands Scheepvaartmuseum: the Dutch Maritime Museum.

To the right of the Zeemagazijn is the Oosterkerk a Dutch Reform church built between 1669–71 by architect Daniel Stalpaert, the same man responsible for the Zeemagazijn.

Johann Wilhelm Windter (1696–1765) German painter and engraver. Adolph van der Laan (1684–1755) Dutch engraver and draughtsman, worked for a long time in Paris, and had as his pupil Jan Punt. He specialised in engraving works after J. Glauber and Van der Meulen, and is remembered especially for ​‘The Assassination of the Prince of Orange, William I’.