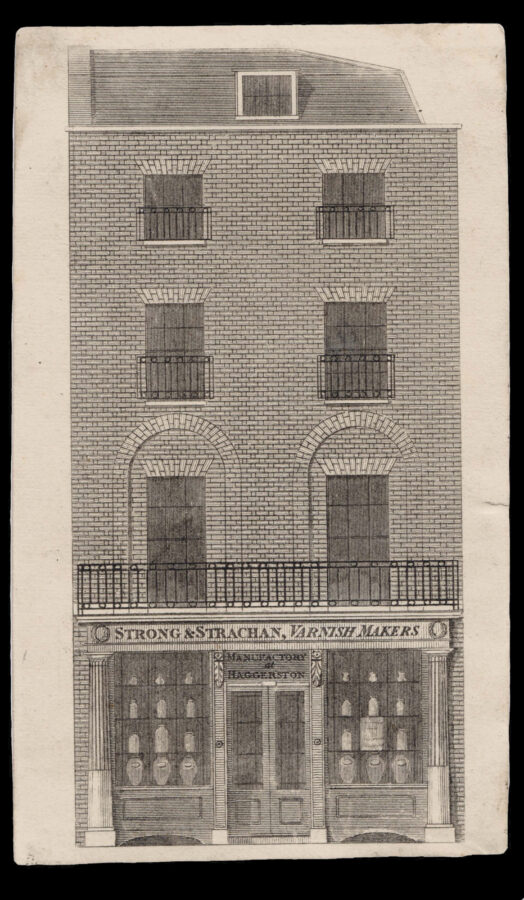 V is for Varnish Maker

While most nineteenth century trade cards include ample information about the business’ location and services, that of Strong and Strachan does not even provide an address. Instead, it shows an illustration of their shopfront, perhaps in the hope that the potential customer would be able to recognise it from the image in real life. Pots of varnish in various sizes are visible in the window.

Although varnishes had been produced and used for millennium, varnish did not become readily commercially available until the end of the eighteenth century. As described by. J. Wilson Neil in his ​‘Papers in Chemistry’ (1789), ​“the art of varnish-making has been kept, in its. details, as far as possible, a profound secret”. He also instructs the would-be varnish maker ​“to procure suitable premises some distance out of town, and sufficiently large for the scale of the business intended”. This is presumably why Strachan and Strong manufactured their varnishes some distance from their shop, at a ​“manufactory at Haggerston”, as indicated by a sign above the door.

The Post Office Directory of 1812 lists Strachan and Strong at 30 Long Acre, while those from 1814 and 1818 both locate the business at 117 Long Acre. Robert Alexander Strachan was also insured at 21 Long Acre, which may have been his home address. By 1843, the Post Office Directory list Alfred and Frederick Strong as varnish makers at the same address; Robert Alexander Strachan is listed at 54 Wattling Street as a maker of anticorrosion paint. There exists a will of a varnish maker named William Strong who died in 1837; it is possible that he and Strachan worked in partnership together during the early decades of the nineteenth century, and that after his death the business was passed to his sons, while Strachan found premises elsewhere. 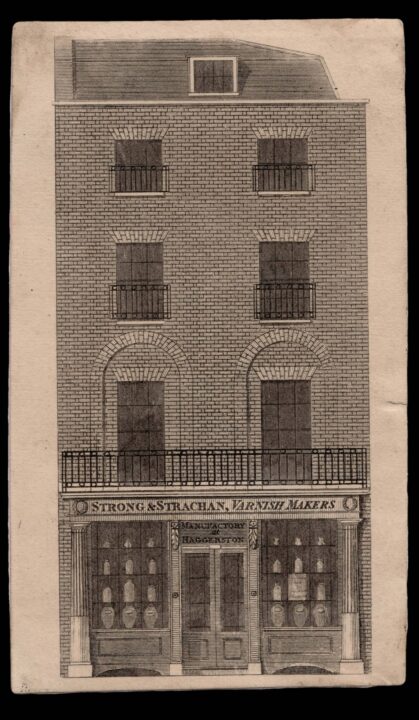