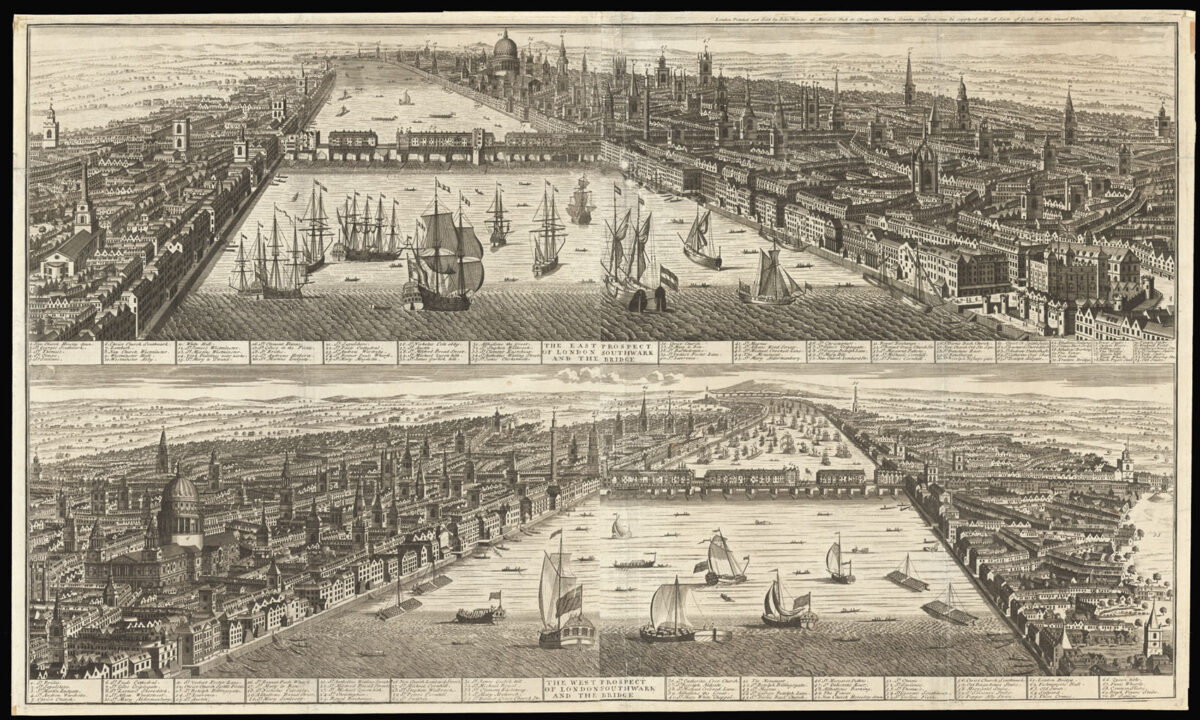 In this large-scale print Bowles has combined two earlier separately issued panoramas engraved by Sutton Nicholls and published by Henry Overton around 1718; both views, however, have been widely updated. Bowles records a number of new churches either finished or under construction, erected under the Commission for Building Fifty New Churches after the Great Fire: ​‘New Church Horsley Down’ (i.e. St John Horsleydown, built 1732, designed by Nicholas Hawksmoor).

​‘New Church, Westminster’ (i.e. St John the Evangelist, Smith Square, popularly known as Queen Anne’s Footstool due to its four towers, supposedly because when the architect Thomas Archer asked the Queen what she wanted it to look like, she kicked over her footstool and said ​“Like that!”, built 1714–1728), ​‘New Church, Lombard St.’ (i.e. St Mary Woolnoth, built 1716–1727), Christ Church Spitalfields (built 1727–1733), and ​‘New Church Old St.’ (i.e. St Luke Old Street, built 1732–1733, the burial place of William Caslon, whose typeface you are reading at this very moment). The Custom House is Wren’s, burnt down in 1718.

Ralph Hyde records a later state of this print, where the Cheapside imprint has been erased and replaced with one giving the new premises in Cornhill. John Bowles set up business in Cheapside in 1723 and moved to Cornhill in 1733, giving an approximate date for the print. The print is included in John Bowles’ 1731 catalogue, and in his 1736 catalogue with other two-sheet prints, described as ​‘cheap and proper Ornaments for Halls, Rooms, and Stair-Cases.’