A catalogue of maps, prints, copy-books, &c. From off copper-plates, printed for John Bowles …Where Merchant, Gentlemen, City and Country Shop-keepers, and chapmen may be furnished with the newest and best Variety at the lowest Prices.

This engraved title-page prefaced the catalogues of John Bowles from 1731 until 1753.

Bowles hailed from one of London’s leading publishing families, who produced and sold prints, books and maps from their shop in the City throughout the eighteenth century. Under his father, the founder of the firm, most of their pieces were printed from existing plates which they purchased from others. When John Bowles inherited the company, however, they began to publish more and more original material, including maps detailing the latest discoveries in North America, Spanish sieges of Gibraltar and updated maps of London. He produced regular catalogues of his stock, and this engraving was designed as an apt title page for these.

Engraved by John Clark in 1731, it takes the forms of a trompe-l’oeil of prints typical of the Bowles’ inventory. These include a classical landscape, a map of England and a maritime scene. This last image was taken from Thomas Baston’s ​‘His tenet Imperium Pegali Britannia Magna’, a series of prints made in 1721 showing the ships of his Majesties Royal Navy. In 1753, Bowles began to work with his son, Carington, and from this year onward, the catalogues bear the name ​“Bowles and Son”. This title-page is featured in the earlier catalogues, sometimes with the place of publication listed as ​“Mercer’s-Hall in Cheapside”.

Original engraved catalogues are now a rare find; we have been unable to trace any other examples on the market. 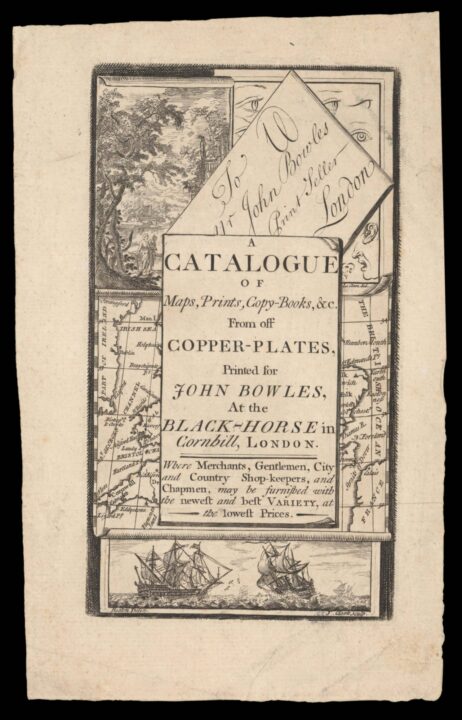