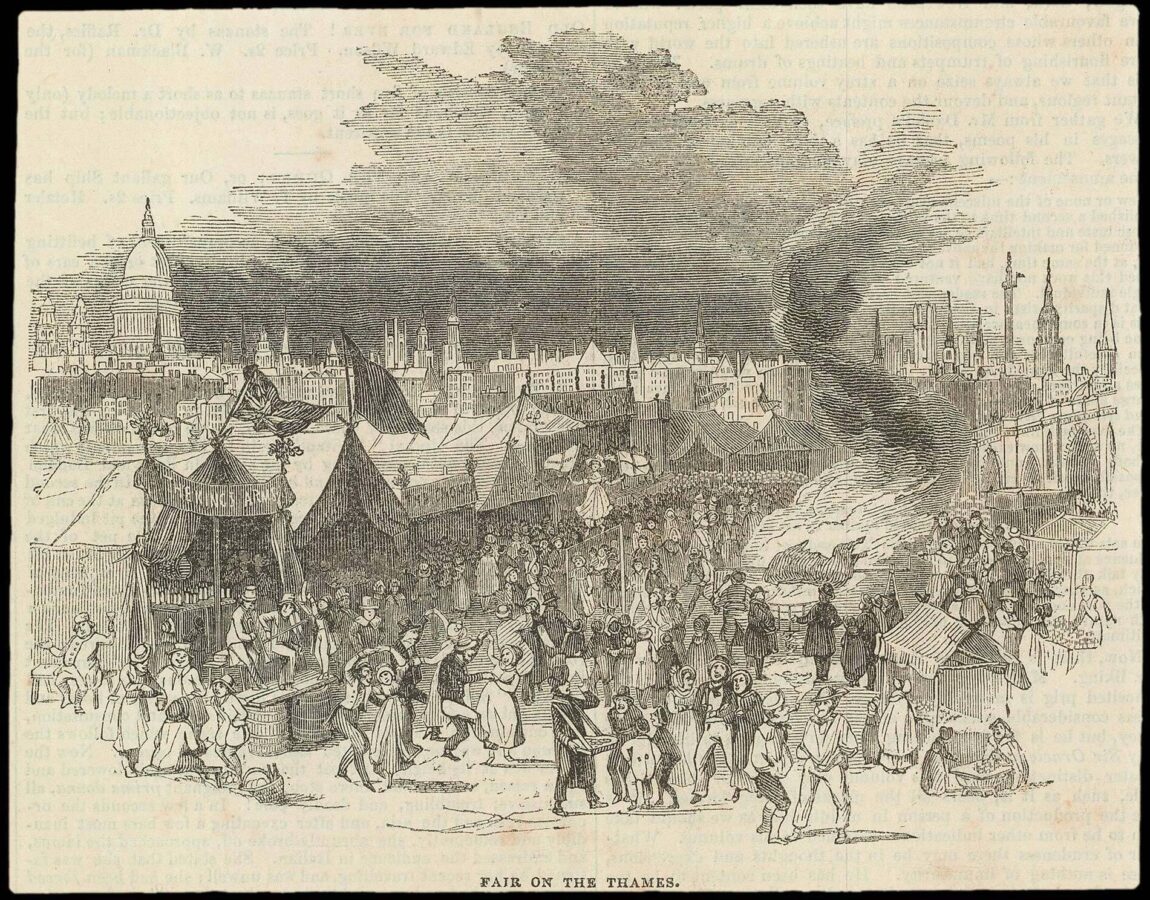 The Winter of Napoleon’s discontent

Fair on the Thames.

This clipping from the ​‘Illustrated London News’, published nearly thirty years after the event, is a nostalgic scene commemorating the anniversary of the winter of 1813–1814: “…a specimen of what the Genius of Frost was capable of doing when he went about his work in earnest. It was in this eventful winter that Napoleon retreated from Moscow, amidst the horrors of cold, desolation, and famine; and it was in the winter of this year that Winter, ​‘canos hirsute capillos’, shook the icicles from his beard over the inhabitants of London, and took old Father Thames into custody… The frost set in with a cold, piercing easterly wind, on the 27th December, 1813, and lasted, with little intermission of its intensity, until the 5th of February following. So hard was the surface of the river for several weeks, and so thick the ice, that a long road, or rather street, which was called the City-road, was formed from Blackfriars’-bridge to old London-bridge,… On each side of this long street were booths of all descriptions; dancing, eating, drinking, smoking, &c. were going on without intermission all day and all night. There were printing presses, inter alia; and songs, poems, and descriptions setting forth the multitudes who thronged to see the wonders. Bambling-booths, shows, and so forth were in abundance; in short, the whole river represented an immense Saturnalia, an enormous Bartholomew fair. There were fires blazing, sausages frying, fiddlers tuning, horns blowing, and groups of dancers in incessant employment and requisition,…” (Illustrated London News).

The winter of 1843, the year in which Charles Dickens wrote ​‘A Christmas Carol’, was, however, according to the anonymous author of the accompanying article [not present], was barely winter at all: “… if it were not for the shortness of the days, the occasional visitations of the fogs, and the mud by which the streets and the passengers are defiled, and for the few hours here and there of what is now called frost, the inhabitants of London would feel but little difference between July and January”.