“The Vinegar House” and ​“The Pest House”

A pair of views of the City of London taken from each side of the River Thames.

The south prospect is the third state of this panorama, originally published in 1710, probably by Henry Overton, in whose catalogue it appears in 1717. The coat of arms at the upper left corner has been changed from those of Queen Anne in the first state to the Hanoverian coat of arms, with the letters ​“GR” for ​“George Rex” above and the motto he adopted, ​“Dieu et mon droit”, underneath: Anne had chosen to use ​“Semper easdem”.

The image is copied from Kip’s panorama. However, it is more naïvely drawned distorting the perspective to make the church towers appear smaller. Prominence is given to the Great Store House at the Tower of London, and the tower of St Clement Danes (pre-Gibbs) is included. The Custom House on all editions is Wren’s (burnt 1718), not Ripley’s that replaced it. The tower of St Andrew Holborn lacks its urn pinnacles. St Michael Crooked Lane has a regular spire, not the three-stage one that was actually built. The Folly is shown off Bankside.

The north prospect shows the capital from what was then open land in the north of London, popular for walking. The artist has inserted himself at the left of the picture with a drawing board. This unusual viewpoint enables the inclusion of landmarks not visible from the other side of the river, including the White Swan (39), a public house in Covent Garden; the vinegar house (42), an important landmark at a time where vinegar was used for everything from dyes to masking smells; the pest house (40), a building where victims of the plague and leprosy could be quarantined from the rest of the population.

The title is engraved upon a swallow-tailed, tasseled banderole in the sky, with the Royal arms as borne by Queen Anne, 1707–1714 at top left. The City arms (helm absent from crest, and dragon’s wing surmounting crest-wreath turned to sinister) are at the top right, and 51 references appear as a key at the bottom.

There is only one known state of this, published in 1712 by Henry Overton. 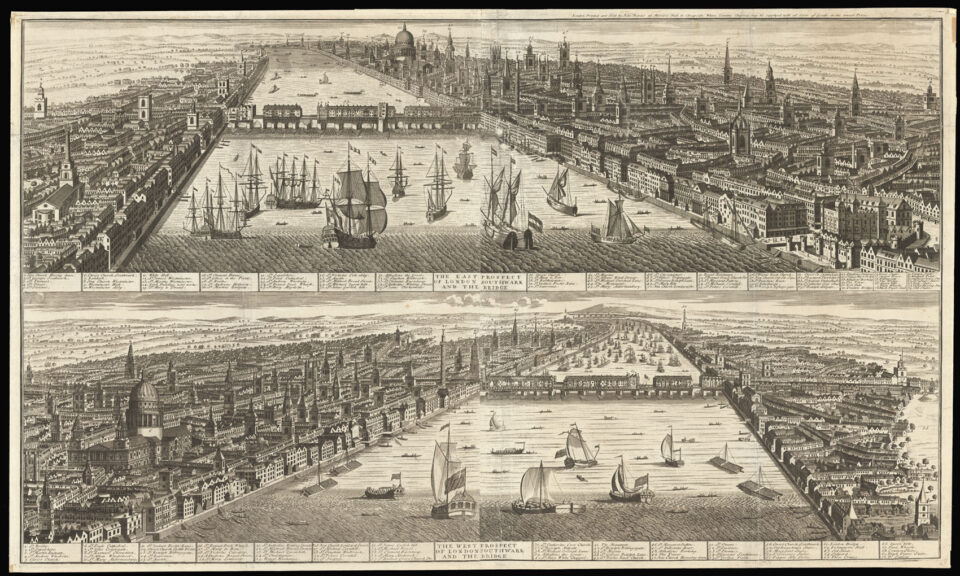