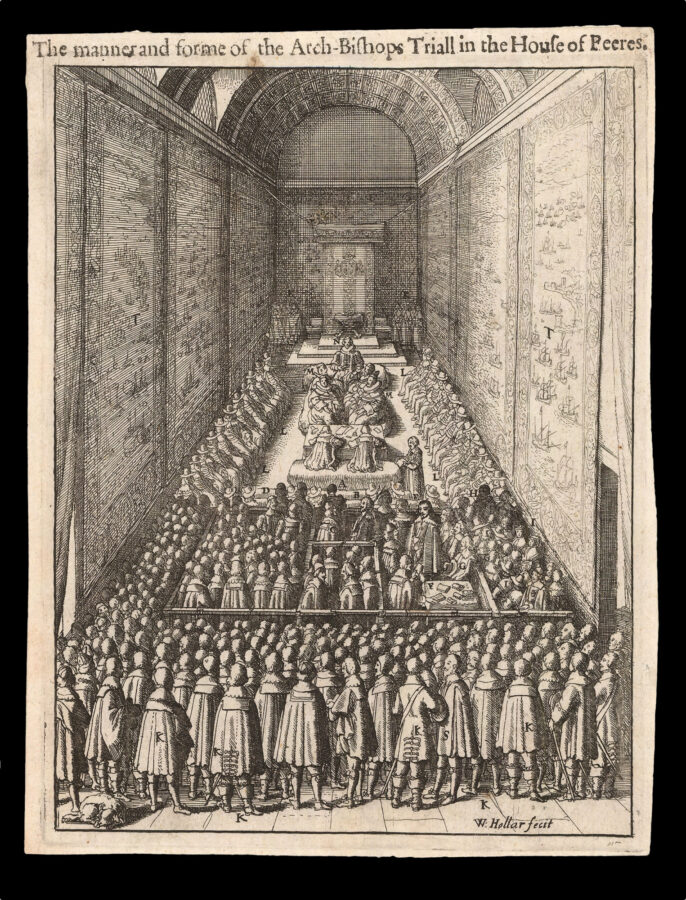 The trial of Archbishop Laud

The manner and forme of the Arch-Bishops triall in the House of Peeres.

William Laud served as Archbishop of Canterbury under Charles I from 1633 until his execution in 1645. This was in part due to his theological and ecclesiastical views, but mostly because of how he used his power and proximity to the king to manipulate and persecute his opponents. The Long Parliament of 1640 accused Laud of treason, alongside that of the Earl of Strafford, whose execution was also depicted by Hollar. As in the case of Strafford, Parliament was unable to find any solid grounds on which to convict Laud, and therefore eventually passed a bill of attainder under which Laud was beheaded on Tower Hill on 10 January 1645.

Hollar’s detailed engraving of the scene of Laud’s trial was included in a book published in 1644, before the execution, entitled ​‘A breviate of the life, of William Laud Arch-Bishop of Canterbury: extracted (for the most part) verbatim, out of his owne diary, and other writings, under his owne hand. / Collected and published at the speciall instance of sundry honourable persons, as a necessary prologue to the history of his tryall, for which the criminal part of his life, is specially reserved by William Prynne of Lincolnes Inne, Esquier’.

The house is packed with attendees, among whom many are identified by an alphabetical key. These are the Archbishop himself, the Lieutenant of the Tower of London where he was being imprisoned, his defence council, the clerk, members of the House of Commons and Henry Burton, who was surely excellent evidence against Laud’s character, since he had his ears cut off for daring to criticise him in a pamphlet. The letters also identifies various features of the house such as the tapestries on the walls. The key was printed in ​‘A breviate of the life of William Laud.…’ but is not included here.