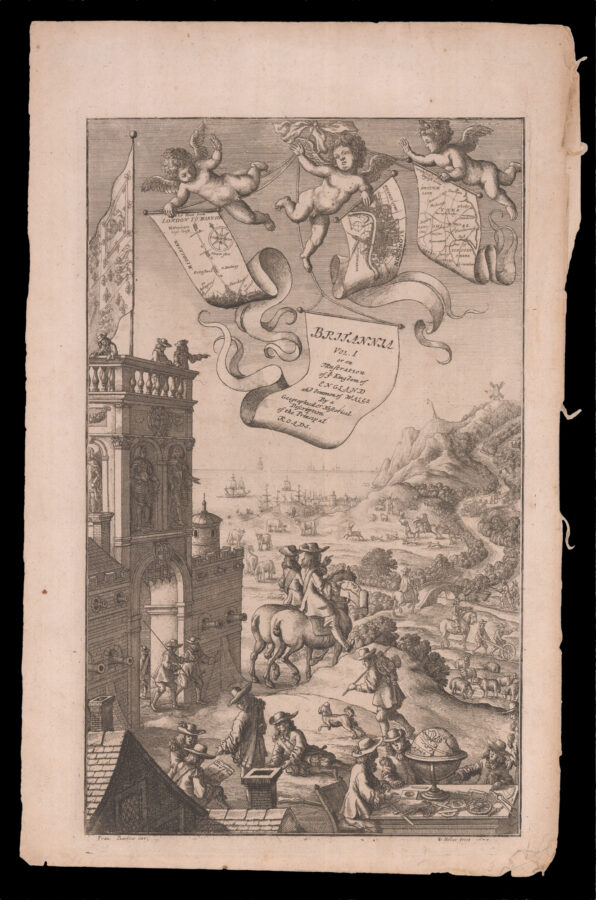 The title page to Ogilby’s ​‘Britannia’

Britannia, Vol. I or an Illustration of the Kingdom of England and Dominion of Wales By a Geogrpahical & Historical Description of the Principal Roads.

John Ogilby was one of the most interesting British mapmakers. After early setbacks as a dancer and theatre owner, he established himself as a publisher in London, specialising in lavish classical translations, which he made himself, notably illustrated editions of Virgil. After the Great Fire of London in 1666, Ogilby repositioned himself as a publisher specializing in geographic and cartographic material, and the following decade produced two incredibly accurate plans of London. Ogilby’s magnum opus, however, was his ​‘Britannia, Volume the First: or, an Illustration of the Kingdom of England and Dominion of Wales’ (1675) the first published road-book of any country in western Europe, the roads drawn on a uniform scale of one inch to one mile, in the form of strip-maps running up the page. The volume was hugely successful, and much reprinted and, when the copyright expired, heavily copied by subsequent mapmakers, including Owen and Bowen, John Senex and Thomas Gardner.

The present title page, however, is from the first edition of the seminal work, and was etched by Wenceslaus Hollar after a design by Francis Barlow. It shows an ornate gateway tower leading into London with the arms of the city flying above. Numerous figures and animals are gathered around the gateway as well as on the hillside and in the harbour that form the background. The attempt to incorporate a range of Britain’s landscapes has resulted in a rather surreal image combining different scales and styles. In the air three putti hold banners bearing maps, roadmaps and of course the work’s title.