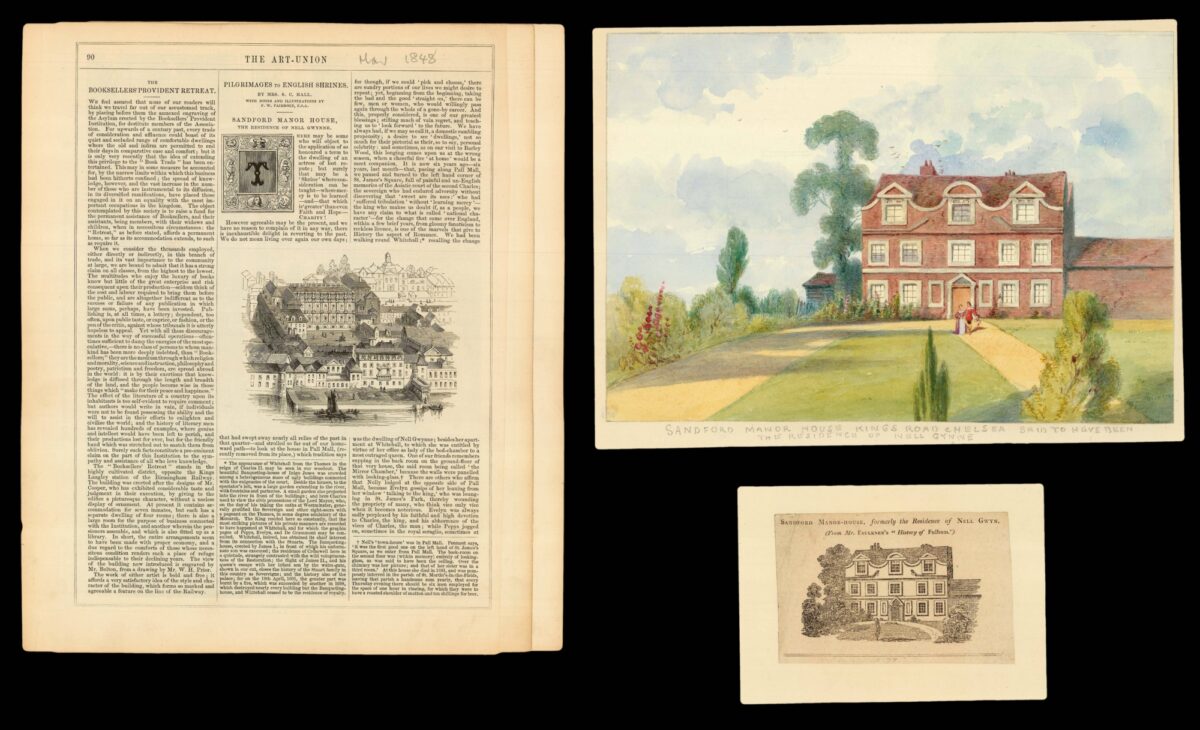 The mystery of Sandford Manor House

Sandford Manor House Kings Road Chelsea said to have been the residence of Nell Gwynne [sic].

Sandford Manor House gained some notoriety in the late eighteenth century when it was rumoured to have either been Nell Gwyne’s family home, or built for her by Charles II, whose mistress she was.

​“A halo of romance is gathered round Sandford Manor House because of Nell Gwyn’s supposed connection with it. We have even been told that it was built for her by Charles II, although the style of the house is undoubtedly earlier, and we know that it continued to belong to the Maynards till the latter half of the 18th century. In the ​‘Gentleman’s Magazine’ for March of the present year [1907] there is a pleasant article in which will be found all that can be said in favour of this tradition. The writer seems convinced that the popular actress here found a home, that ​“the rooms rang with her merry peals of laughter,” and that in the quiet garden ​“her good angel came to her and taught her to work out some practical scheme for the comfort of the poor and afflicted.” For his belief he has the authority of Faulkner, the historian of Fulham and Chelsea, who, writing in 1812, says positively that ​“the fair Eleanor” resided at Sandford Manor House, his chief piece of evidence being that a medallion in plaster of her had some years previously been found on the estate, and was then in possession of the owner. Other relics were afterwards discovered, including a thimble with the initials N.G. engraved upon it, and, as Mr. Fèret tells us, ​“an alleged Freemason’s badge or jewel supposed to have belonged to Charles II”, found under the boards of a room on the first floor and presented by Mr. McMinn, the then occupant, to his Lodge.” A secret recess also came to light, containing the remains of wooden platters. Four walnut trees formerly in the garden were locally supposed to have been planted by ​“royal hands,” while, according to another legend, the ​“Merry Monarch” once rode his horse or pony up the by no means spacious staircase” (Webb).