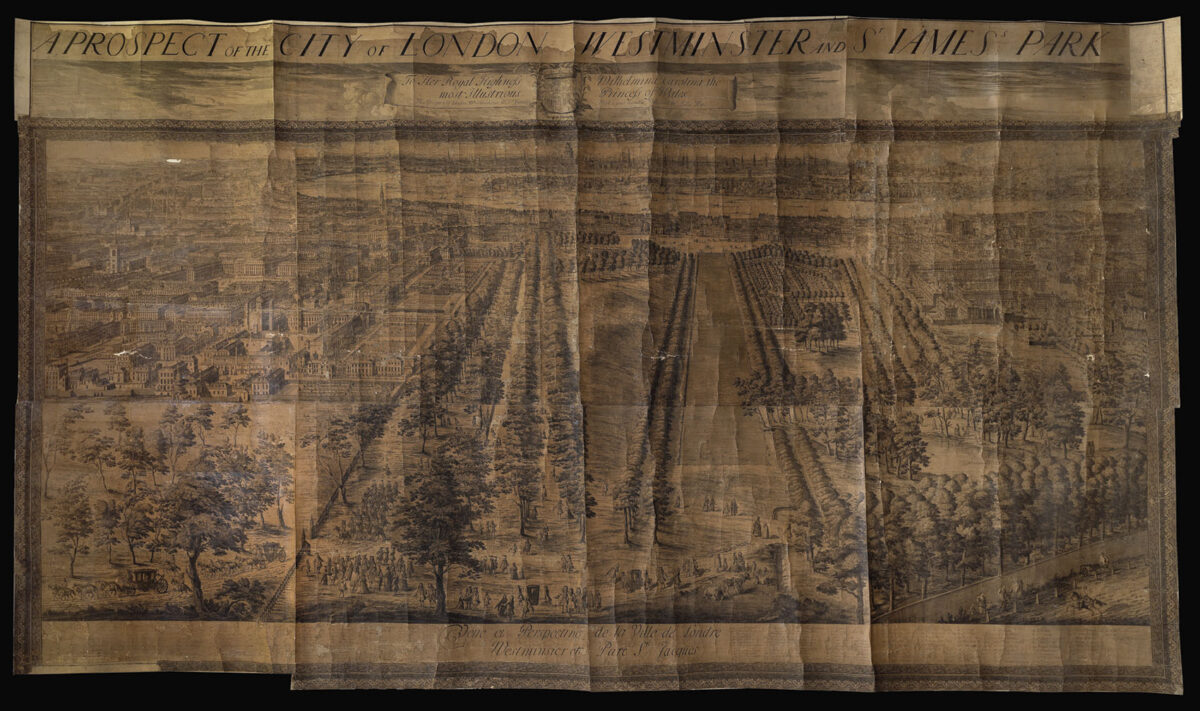 A Prospect of the City of London, Westminster and St. James’s Park.

A fine example of Kip’s view of London, the ​“largest view of London ever to be published” (Hyde and Jackson). Johannes Kip (c1652-1722) was a Dutch engraver and printer who moved to London, following William of Orange and his wife Mary after the Glorious Revolution.

Kip’s prospect was not only innovative in scale, but also in perspective. Most prospects of London focused on the city, usually viewed from the south of the river. Kip used ​“an entirely novel view-point — the roof of Buckingham House” (Hyde and Jackson). The cost to the prospect of giving the Palace such prominence is a radical distortion of the more distant townscape. A satisfactory profile view of the City of London is achieved only by doubling the Thames back on itself. The focus of the print is on St James’s Park, an epicentre of urban life. There is a herd of deer, who were tame enough to eat out of visitors’ hands, and a flock of cows who were driven to the Whitehall end of the park every day to be milked (Kip has changed this to the Buckingham House end). The inhabitants range from the trio of women selling oranges (wearing kerchiefs as a sign of respectability), to the men playing pall-mall, a game similar to croquet which gave the London street its name, to the family of beggars just outside the gate. The most important characters, however, are George I, shown in his coach, and the Prince and Princess of Wales in their own coach just behind, escorted by a group of Horse Guards. Kip’s decision to include them, as well as to use the viewpoint from Buckingham House, is a clear statement about his loyalty and about where the power in Britain now lay — in Westminster.

Publication was delayed by the Jacobite rebellion in 1715, and by the rift between the King and the Prince of Wales. Kip was left in a difficult position. Not only was the view dedicated to Caroline, Princess of Wales, who had defiantly chosen to go into political exile with her husband, even though it meant losing access to her children, but it also showed the Prince and Princess riding in a coach immediately behind the King. Luckily, the two were eventually reconciled and Kip was able to publish his view in 1720.

Hyde notes that most surviving copies have eight sheets, where as the present example has the original 12 (which includes the title above the view). Hyde identifies it as the third state, distinguished by the updated James Gibbs steeple on the church of St Martin in the Fields on sheet six (numbered 14) and the continuation of the neat lines around the references and title below the image. It must have been published after 1726, when St Martin in the Fields was reconsecrated, possibly by Thomas Millward who also published the second state (Hyde).