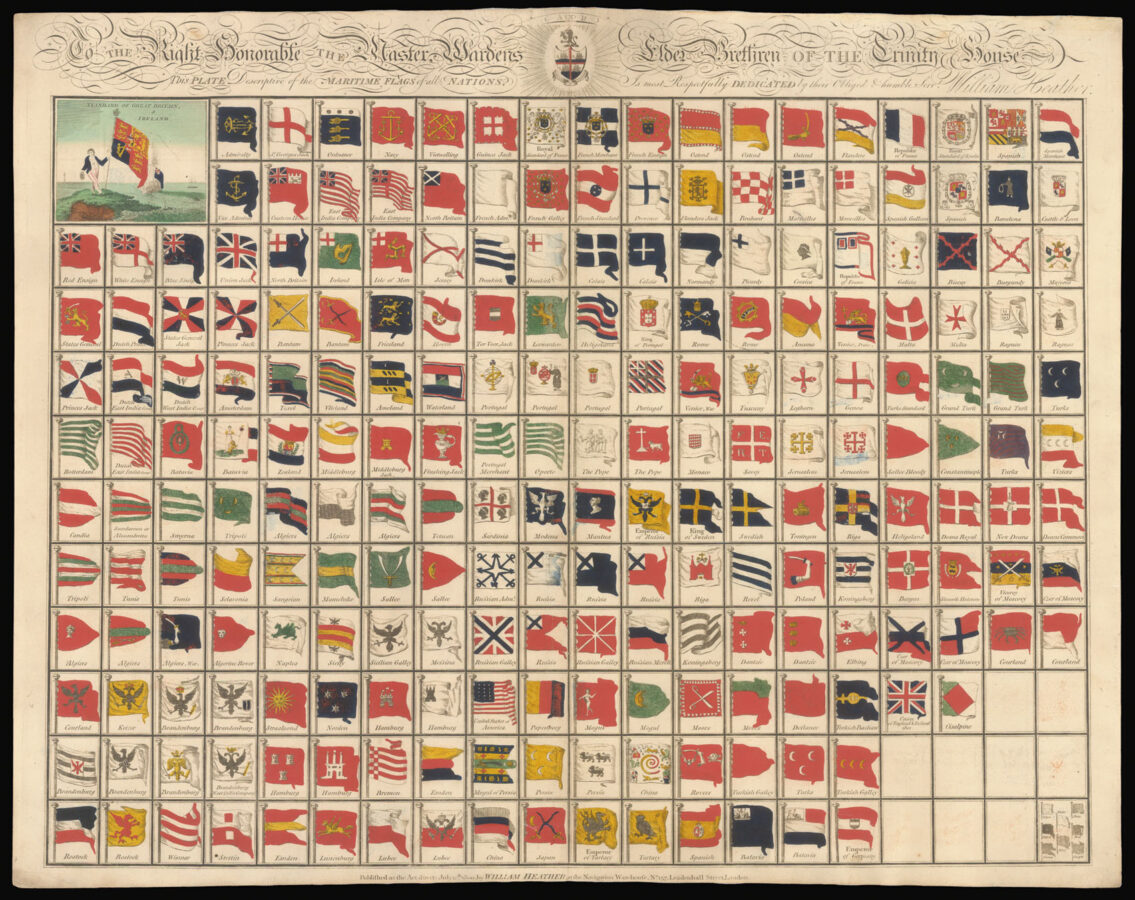 [Flag plate] To the Right Honourable the Master Wardens, elder Brethren of the Trinity House. This Plate Descriptive of the Maritime Flags of all the Nations Is most Respectfully Dedicated by their Obliged & humble Servt. William Heather.

A fine example of William Heather’s flag plate, featuring all the known naval ensigns, including those of privateers and pirates.

The plate consists of 125 naval ensigns, beginning with the principal British flags, and continuing to list all the major European countries, their principal ports, China, Persia, the United States, together with the major trading companies, such as the Dutch and English East India Companies.

Although the Rover flag was intended to show three of the most common pirate or privateer marks in use in the Caribbean and New World; this particular arrangement can be traced to the pirate Christopher Moody (1694–1722), who engaged in piracy along the North and South Carolina coast between 1713–1718, and who was famous for sparing no lives. He would later be captured and hanged at Cape Coast Castle in Cabo Corso, in Ghana. The red colour of the flag meant no quarter would be given, the hour glass with wings signified time was running out for his victims, with the message being delicately reinforced by the raised arm with a cutlass, and a skull and cross bones.
The ​‘Algerine Rover’ ensign, was often flown by what we would now know as the Barbary Pirates i.e. pirates and corsairs that operated in the Mediterranean from the North African ports of Algiers, Salé, Rabat, Tunis, and Tripoli. In the present example the flag bears a skull; however, more often the image would have been the head and shoulders of a corsair.

Neither of the flags on the chart is coloured the traditional black. There is evidence for both colours being used by pirates, both in the Mediterranean and the New World. It has been suggested that the black flag was flown to tell other vessels that if they surrendered, their lives would be spared. If the warning was not heeded then the red flag would be raised and blood would be spilled.