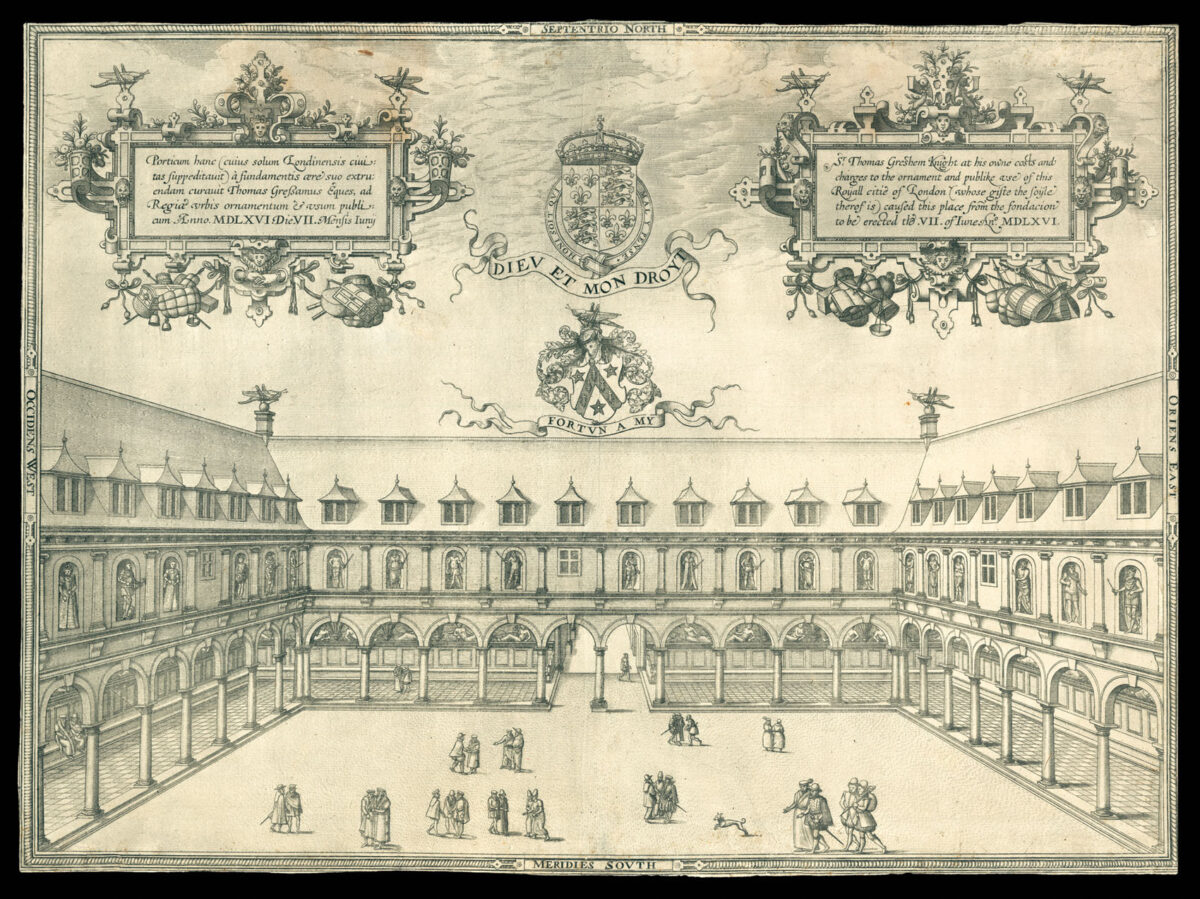 The first commercial building in England

[The Royal Exchange, London Interior Court, from the South]

The rare first state of Hogenberg’s print of the Royal Exchange. In the sixteenth century, the power dynamics in Europe shifted. The dominant financial forces in the European market were no longer simply those with vast domestic and overseas territories, likes Spain. The rise of the mercantile classes, and the corresponding ideology that the pursuit of wealth could be both patriotic and devout, increased the importance of commerce in the construction of English nationhood, as Hogenberg’s print shows.

Frans Hogenberg, who collaborated with Georg Braun to create the ​‘Civitates Orbis Terrarum’, emigrated to London in 1568 with his brother Remegius after the Duke of Alva became regent of the Spanish holdings in the Low Countries, and stayed until 1587. Two years before he arrived work had begun on the Exchange, the first commercial building in England, inspired by Sir Thomas Gresham’s experience of the bourse in Antwerp. It was clearly significant enough to his contemporaries for Hogenberg to record the occasion: he also produced a print of the exterior. Gresham (1519–1579) was a banker and merchant, whose expertise in currency helped rebuild the pound under successive Tudor monarchs. The Exchange was designed both to provide a centre of commerce as England’s financial power grew, and also to act as a source of income for Gresham, who rented out the shops in the building. The print shows the Exchange without the column crowned by a grasshopper added in the final stages of building, which appears in the second state. Gresham’s crest was a grasshopper, probably a play on the first syllable of his name. The royal arms are suspended above the courtyard, with Gresham’s arms underneath: Elizabeth I would officially open the Exchange in 1571, granting it a royal title and the right to sell alcohol.

We have not been able to trace any other examples of this state of the print. The British Museum holds the second state.