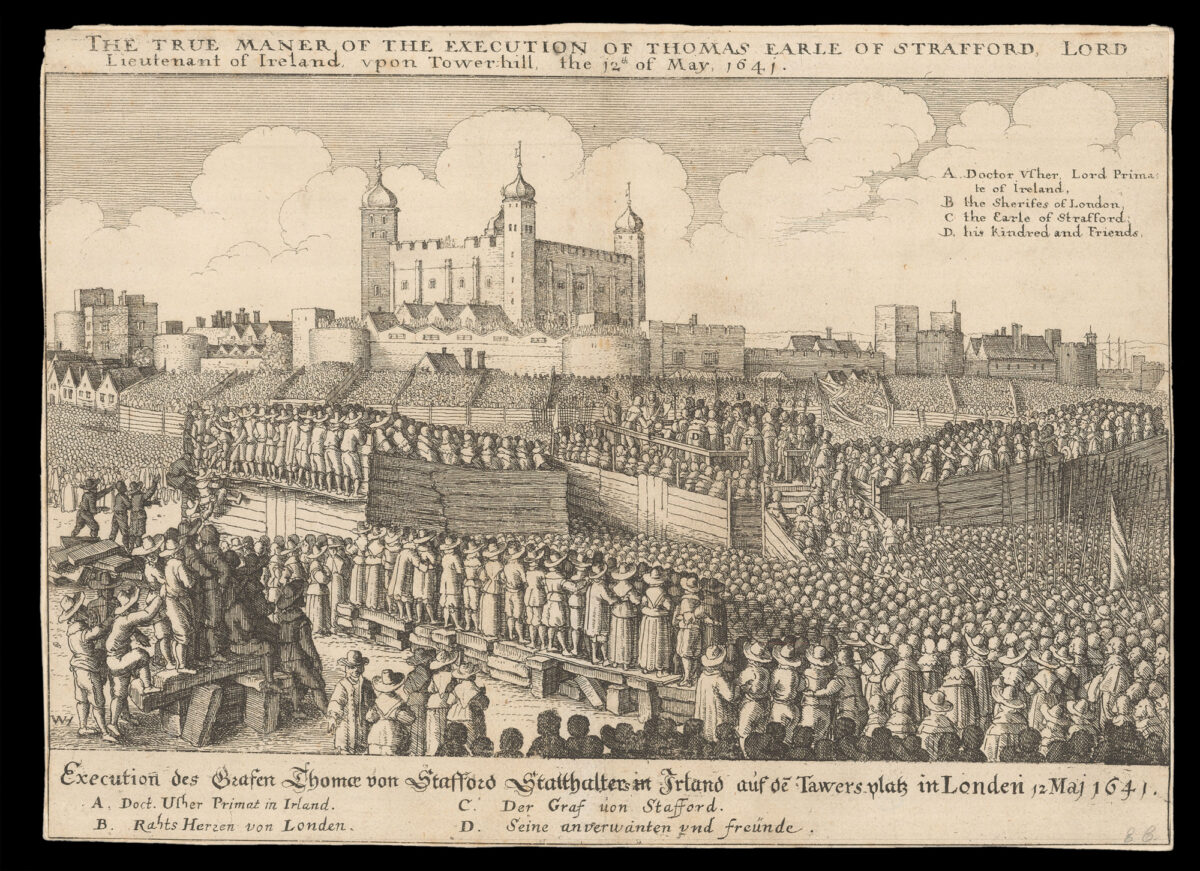 The execution of the Earl of Strafford

The True Manner of the Execution of Thomas Earle of Strafford Lord Lieutenant of Ireland upon Tower hill.

Thomas Wentworth, 1st Earl of Strafford was Lord Deputy of Ireland for eight years before returning to England in 1640 to serve as leading advisor to King Charles I. Upon his return, however, he faced impeachment on account of his ​“high misdemeanours” in Ireland. Three weeks after Parliament had been assembled, Strafford was taken to the Tower of London. Despite a large number of people willing to testify against his character, the Commons was unable to lay a charge of high treason against him, and therefore passed a bill of attainder allowing him to be sentenced to death. Strafford himself even sent Charles I a letter releasing the king from his oath to spare his advisor’s life, and thus with the royal signature, the death warrant was put into effect on May 12, 1641.

Contemporary reports claim that a crowd of 300,000 gathered around Tower Hill to witness the execution, although given that this was rougly the population of London at the time, it is likely to be an exaggeration. Nonetheless, as Hollar’s engraving of the scene shows, there were undoubtedly a huge number of people desperate to witness the event. Thousands of indistinct figures, mostly men but also many women, all wearing broad-brimmed hats, crowd onto wooden stands, two of which are collapsing due to the cumulative weight of the spectators. On a raised platform in the centre of the image, the executioner holds an axe and Strafford is shown kneeling before the block. Hollar identifies several important attendees with a numerical key: ​“A. Doctor Usher, Lord Prima.te of Ireland, B. the Sherifes of London, C. the Earle of Strafford, D. his Kindred and Friends”. The present print is an example of the second state, which has the written information in German along the lower edge and was included in the ​‘Theatrum Europaeum’, publlished by J.P. Abelin in Frankfurt in 1643.