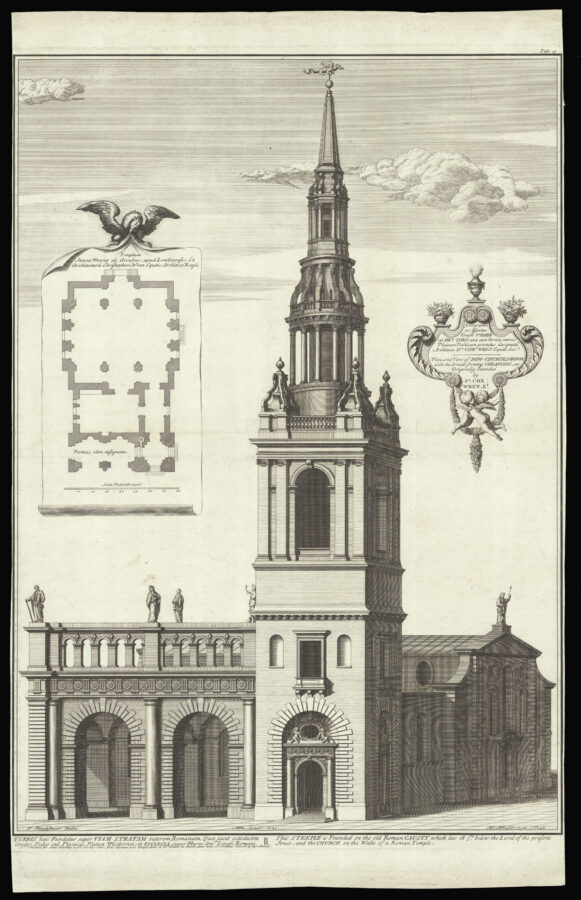 Plan and View of Bow-Church, London with the Arcade fronting Cheapside, as originally intended by Sir Chr. Wren, Kt.

A print showing the original design for St Mary-le-Bow, one of the first churches to be rebuilt by Sir Christopher Wren and Nicholas Hawksmoor after the Great Fire of London. The title cartouche alludes to the previous church’s fate by the urn of fire surmounting it, similar to the one that tops the Monument. An eagle holds a scroll with a ground plan of the church on the left. Wren modelled the church on the Basilica of Maxentius in Rome, possibly inspired by the belief, as recorded in the text below the print, that the site had once contained a Roman temple (actually an early Norman church).

The steeple features a dragon weathervane, a nod to the dragon’s place in the legend of England’s patron, St George, and to its place in the coat of arms of the City of London. The dragon has red crosses on the underside of its wings, as do the dragons in the City’s arms. The Bow dragon was a popular London landmark, appearing in a poem by the libertine Earl of Rochester, and with its equally popular fellow, the grasshopper topping the Royal Exchange (see item 132), in a pamphlet about religious freedom.

Henry Hulsberg (fl.1702–1729) was a Dutch engraver of maps and architecture, working in London.