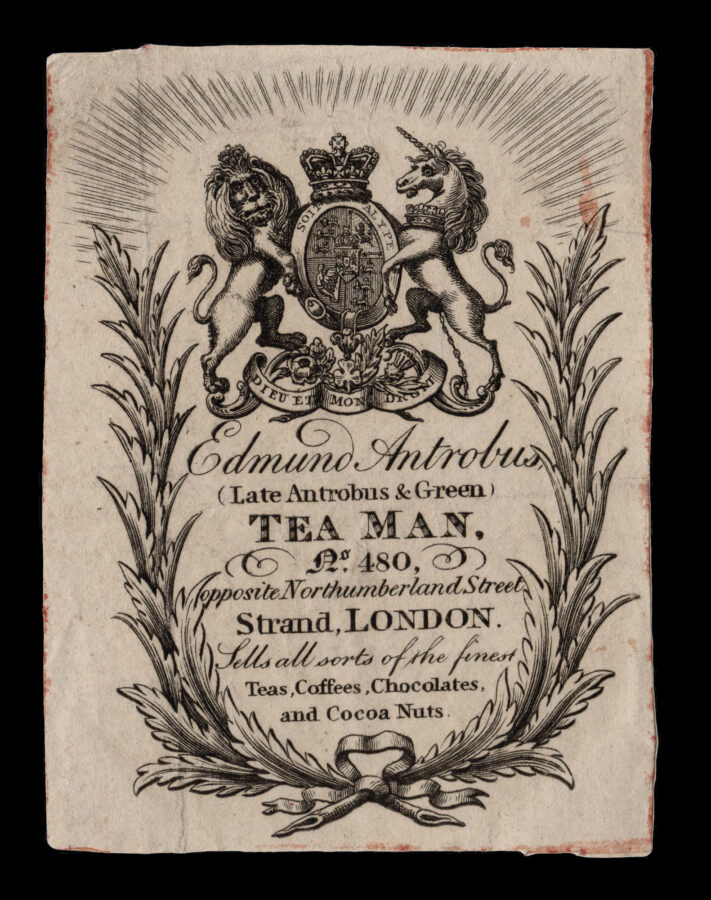 T is for Tea Man

In 1786, a banker named Edmund Antrobus took over the tea business of his in-law Robert Sanxay’s, a druggist who had supplied tea to George II. The Antrobus tea-dealership operated during the final decades of the eighteenth century and much of the nineteenth, up until 1872, when it was purchased from Edmund E. Antrobus, the previous Edmund’s son, by Twining & Co.. In addition to tea dealing, Edmund E. Antrobus also wrote about social issues concerning delinquency, drunkenness and the law, publishing several works during the 1840s, 1850s and 1860s, such as ​‘London, its Danger and Safety; Suggestions for its present and future’ (1848).

He was certainly a well-regarded tea dealer, as in a House of Commons Report of 1833 inquiring into a new type of permit required to import tea, Antrobus was one of the dealers consulted. When asked ​“Is there any smuggling of tea?”, he replied:

​“The quantity I should suppose very small; tea being an article of so delicate a. description, imbibing the flavour of any thing which may have been accidently placed near it. Independently of the liability of tea to damage it is a very bulky article. Spirits can be concentrated and. placed in bags and sunk on the sea-shore and derive no injury, but the damp which would arise from this would immediately spoil tea; it is astonishing how soon the least damp penetrates into it.“

The Parliamentary Papers of 1834 pertaining to this inquiry and the evidence supplied by Antrobus list him as a tea-dealer at 388 the Strand, whereas ​‘Pigot & Co.‘s London Directory’ for 1839 located him at 446 West Strand, also noting that he had previously been at ​“the earlier firm of Antrobus, Greene & Russell, Tea men to His Majesty, of 480 Strand”. The partnership with Greene appears to have involved his father Edmund Antrobus’ around 1811. In fact, although several adverts from the nineteenth century refer to Antrobus & Co., Antrobus the younger never had a business partner during his 45 years as a tea dealer.

The present trade card appears to advertise the services of Edmund Antrobus the elder, after the end of his relationship with Green, but while he remained at 480, the Strand, which would date the card around 1820. It advertises the sale not only of tea, but also of ​“Coffee, Chocolates, and Cocoa Nuts”. The text is surmounted by the royal crest, indicating the Antrobuses’ links to the monarchy as one of their suppliers of the finest tea. 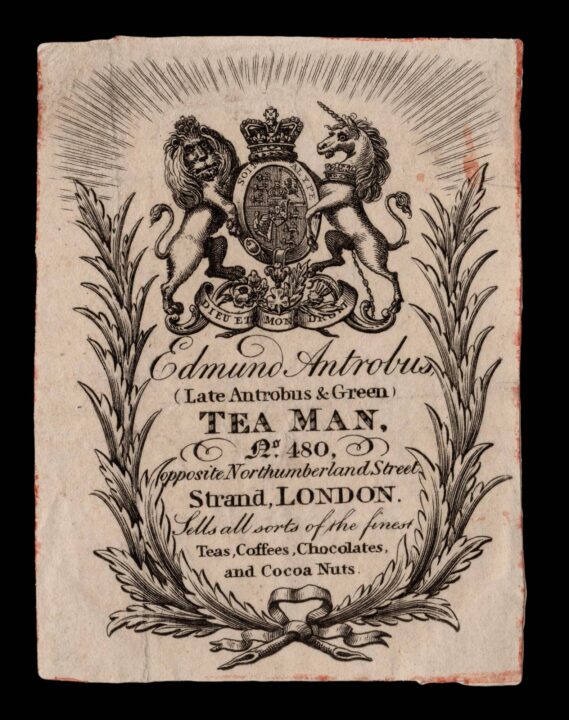