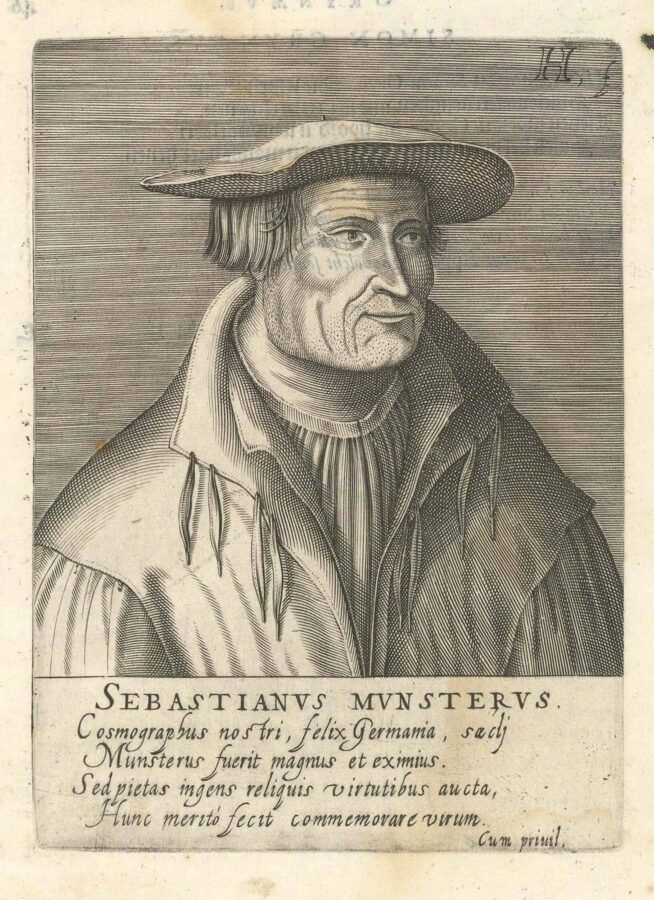 This issue of Munster’s portrait is from Jacob Verheiden’s ​‘Praestantium Theologorum Effigies’ (1602), a collection of portraits of some of the most important theological figures, the majority of which were made by Hendrik Hondius I. The image is captioned in Latin: ​‘Cosmographus nostri, felix Germania, saecli / Munsterus fuerit magnus et eximius. Sed pietas ingens reliquis virtutibus aucta, Hunc merito fecit commemorare virum” (‘Fortunate Germany, Münster, the cosmographer of our era, was great and extraordinary. However, it was his immense piety, increased by his enduring virtues, that made this man worth commemorating’). The portrait had originally been included in a series of important men published in 1599, and appears to have been based on an earlier woodcut portrait published by Henricus Petrus in 1550.

Sebastian Münster (1488 — 1552) became a Franciscan friar in 1506, studying in Tübingen and teaching in Basel and Heidelberg before leaving the order and moving permanently to Basel in 1529, where he took up the chair in Hebrew. Famous in his own age as a Hebraist, he composed a Hebrew grammar and a thesaurus of Hebrew, Latin and Greek synonyms which were used widely by sixteenth-century humanists. Whilst in Basel, Münster also indulged in his other great love: that of cartography.

The love affair had begun some years earlier in Tübingen, while under the tutelage of Johann Stöffler: Münster’s notebook from this period contains some 43 manuscript maps, most of which were based upon others’ work. Münster would publish his first original map in a printed broadsheet of 1525.
Throughout the next decade he produced several important works that would cement his reputation as one of the leading cartographers of his day, and in 1544, Münster produced his magnum opus, the ​‘Cosmographia’. The work would prove to be so popular that some 40 editions in 5 different languages were published between 1544 and 1628, with the number of maps expanding from 26 to 262 by 1628.