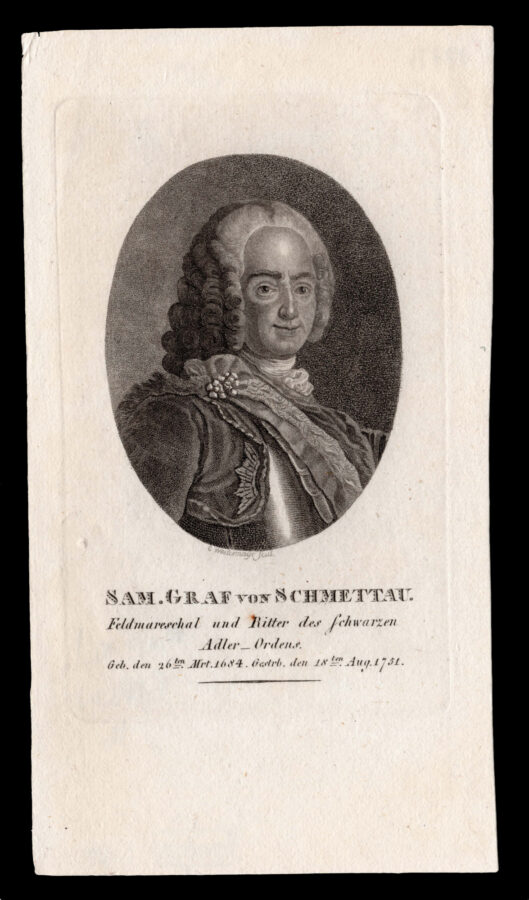 Samuel Graf von Schmettau (1684–1751) was a Prussian who began his military career by fighting in the battles of Blenheim and Malplaquet, continuing through the Austro-Turkish War of 1716–18, the wars of the Quadruple Alliance ((1718–20), the War of Polish Succession (1733–8), and the Russo-Austrian-Turkish War (1735–9). Retiring from military life at almost sixty years of age, Schmettau became a diplomat and served as a curator of the Academy of Sciences. Schmettau continued actively to educate himself, particularly in the field of cartography; in 1748, he created a four-sheet plan of Berlin widely regarded as the best of its time: ​‘Plan de la Ville de Berlin’.

Schmettau’s portrait, accompanied by his rank, and dates of birth and death written below, was engraved for Issue 11 of ​‘Allgemeine Geographische Ephemeriden’ by Conrad Westermayer, and may have been based on a portrait by Dutch painter Anna Dorothea Therbusch. It shows the veteran in a jacket and sash over what appears to be metal armour; he is wearing a powdered wig, and the image is set within an oval.