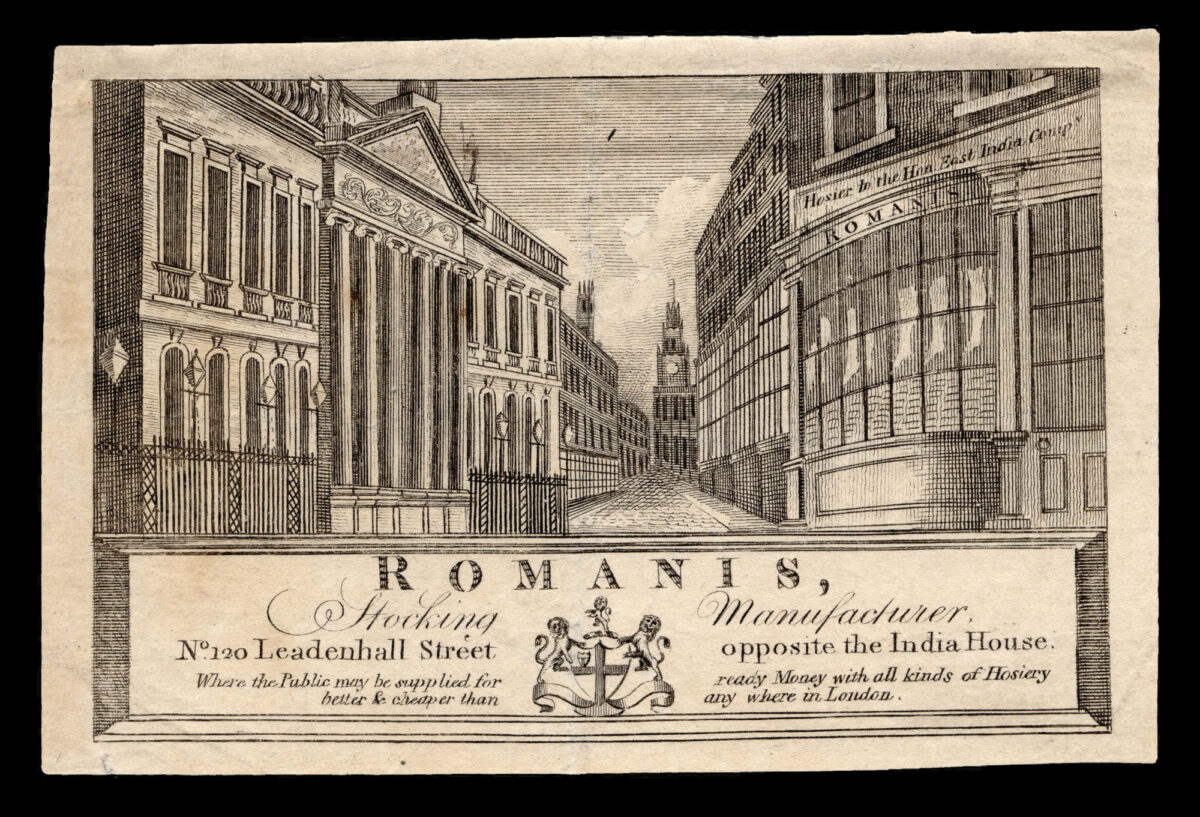 S is for Stocking Manufacturer

… Where the Public may be supplied for ready Money with all kinds of Hosiery better & cheaper than any where in London.

Trade card of Robert and John Romanis, who manufactured and sold hosier at two locations in London. At the beginning of the nineteenth century, Robert Romanis established a shop at 33 Cheapside and a workshop at 120 Leadenhall Street; he was later joined in business by his son John, who managed the premises at 75 Gracechurch Street, as listed in the 1812 Post-Office Annual Directory. These addresses are also found in Pigot & Co.‘s New Commercial Directory of Scotland for 1825 to 1826, as well as in John Tallis’s London Street Views of 1838 to 1840, despite the fact that in 1834 John had listed for insolvency. Indeed, upon the marriage of John’s daughter Anne in 1841, the family was still located at Gracechurch Street, indicating that the business’ financial difficulties were somehow overcome.

Robert too had come into his own share of problems, appearing as the subject of a polemic verse written by Luddite Thomas Large in 1812. Three years later he was forced to take legal action against a customer who paid with a fraudulent ten pound note, ten pounds in 1815 being the equivalent to £910 today. The man was found guilty and, rather alarmingly, sentenced to death, although with a recommendation to mercy by the prosecution and jury.

Despite such complications, the Romanis hosiery business appears to have thrived during the first half of the nineteenth century. The Edinburgh review of 1843 extolled the virtues of their stockings, explaining that ​“Mr. Romanis understands the character of his countrymen. Who could refrain from buying stockings at a shop where such temptations are held out?”. In addition to trade cards, the Romanises published other forms of advertising, such as a broadside presenting ​“a canto” detailing the manufacture and quality of his garments:

​“Take to his Socks, and Boots for Babies,
His Gloves and Woollen Coats for Ladies;
For Men, Feet warm — the Head keep coolish;
Come to Romanis — don’t be foolish;
To Number Thirty-Three, Cheapside,
Come thronging in a. flowing Tide;
It is the House to save your Wealth,
And likewsie much improve your health.“

The present trade cards, though slightly less animated than this ditty, are nonetheless effective. They bear an engraved image of the main Romanis shop, its façade surmounted by the proud announcement that the purveyor was ​“Hosier to the Hon. East India Comp”. Beneath the image appear the company’s name and address at the Cheapside and Leadenhall premises, as well as the assurance that there the ​“public may be supplied for ready Money with all kinds of Hosiery better & cheaper than any where in London”.