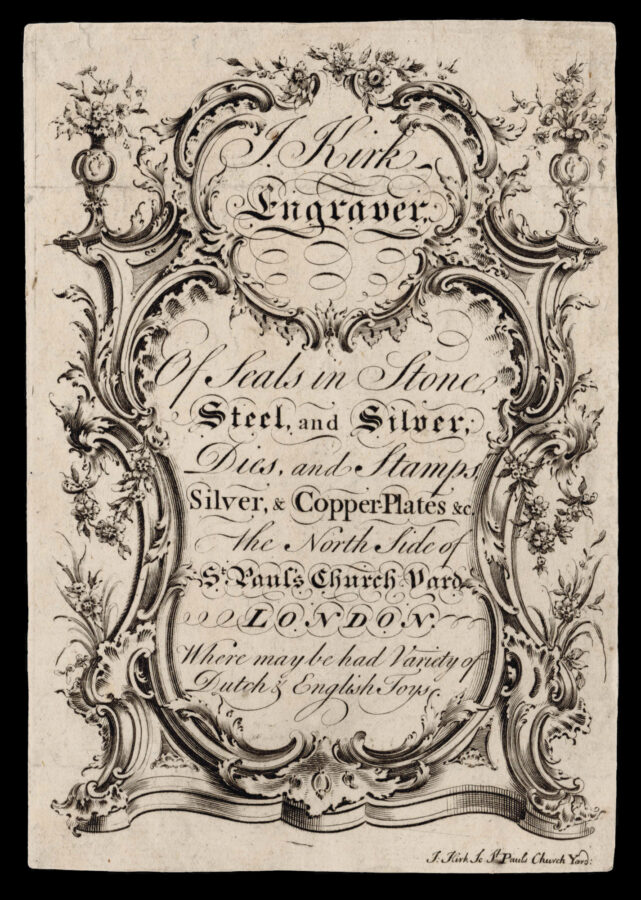 Kirk Engraver Of Seals in Stone, Steel, and Silver, Dies, and Stamps, Silver, & Copper-Plates &c… Where may be had Variety of Dutch & English Toys.

James Kirk (c1725-1791) has engraved this elegant trade card in a fashionable rococco style, which advertises a joint business he operated with this father, John. Best known for engraving a series of plates to Robert Sayer’s edition of ​‘Aesop’s Fables’ in 1749, James Kirk engraved at least two other trade cards: one for his father John Kirk (1724–1776), medal and seal maker (BM Heal 103.8); and one for Thomas Surffen’s ​“Very Commodius Bathing Machine” (BM Heal 8.12).

John Kirk had been operating from ​“the North Side of St. Paul’s Church Yard” since about 1750. James had started his own business, at ​“the Golden Fan a Toy shop, in St. Paul’s Church Yard within 4 Doors of Cheapside”. By 1755, it seems that James had joined forces with John, and was selling his toys from his father’s premises, along with the ​‘Cryes of London’, ​“in Sheets, or stitched, in Little Books; likewise made up in Boxes or Rowlers, at 1s. a Piece, very fit to amuse children and help them forward in their Learning…” (advertised 1754).

In his will, James Kirk described himself as an engraver and toy shop keeper. Interestingly, he left the bulk of his estate to his wife Anne, nee Denman, the sister of William Denman (c1719-1788). On her death in 1805, she left most of her estate to his daughter, her niece, Ann Denman, who married John Flaxman (1755–1826), celebrated English Neo-classical sculptor. 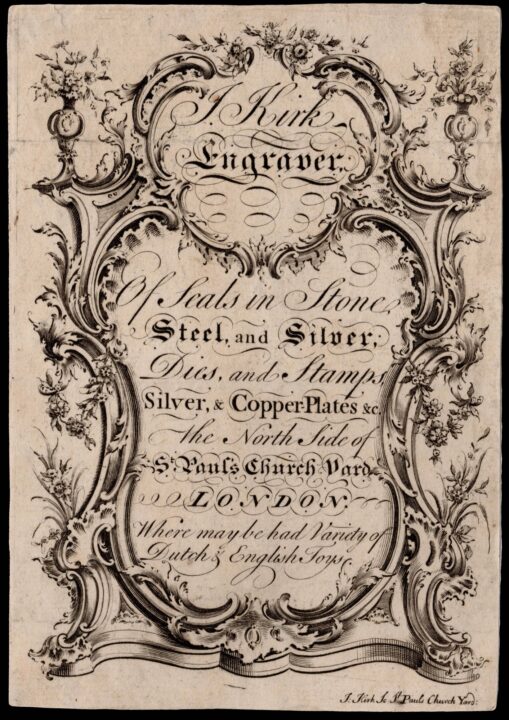