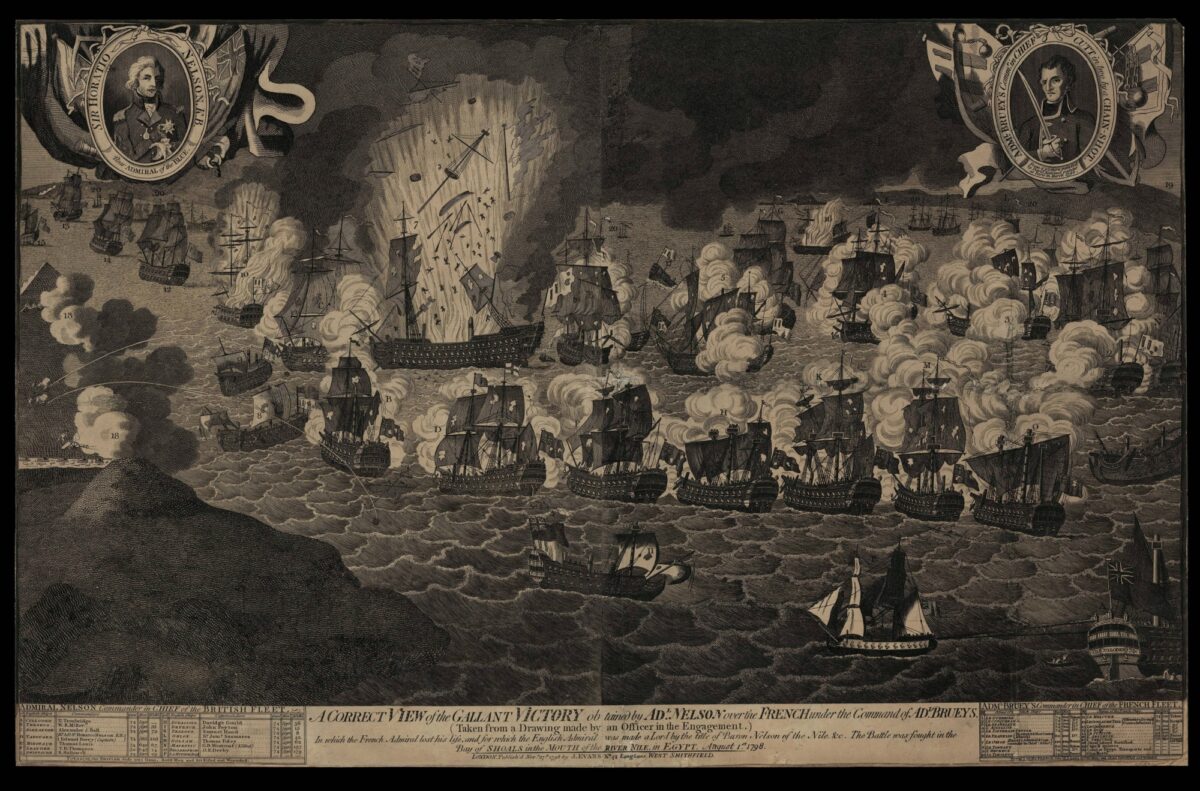 A correct view of the gallant victory obtained by Adl. Nelson over the French under the command of Adl. Brueys. (Taken from a drawing made by an officer in the engagement.) In which the French Admiral lost his life, and for which the English Admiral was made Lord by the title of Baron Nelson of the Nile. &c. The Battle was fought in the shoals with the mouth of the River Nile, in Egypt. August 1st 1798.

The view, taken from a vantage point on the shore, depicts the battle at its climax when Admiral Brueys’ flag ship the ​‘L’Orient’ exploded; numerous men, the main mast, and barrels are shown being flung into the air. To the upper left and right are portraits of Admiral Nelson, and Admiral Brueys commander of the French force, who is said to have been ​“cut in two by a chain-shot”. The title below states that the view was ​“taken from a Drawing made by an Officer in the Engagement”, although the particular officer is not named. To the right and left of the title are two tables listing the British and French fleets, their number of guns, and men. On the British side the table also lists the number of dead or wounded, whereas the French side lists whether or not the ships were captured or burnt. Below both tables totals are given: British: 1012 guns; 8,068 men; 821 killed and wounded. French: 1,190 guns; 10,710 men; and about 5,000 killed or wounded.

In early 1798, Napoleon began planning the invasion of Egypt with the goal of threatening British possessions in India and assessing the feasibility of building a canal from the Mediterranean to the Red Sea. Alerted to this fact, the Royal Navy gave Rear Admiral Horatio Nelson fifteen ships of the line with orders to locate and destroy the French fleet supporting Napoleon’s forces. On August 1, 1798, following weeks of futile searching, Nelson finally located the French in Aboukir Bay, just to the east of Alexandria.

The French commander, Vice Admiral François-Paul Brueys D’Aigalliers, anticipating a British attack, had anchored his thirteen ships of the line, in line of battle with shallow shoal water to port and the open sea to starboard. With sunset fast approaching, Brueys did not believe the British would risk a night battle in unknown, shallow waters. As a further precaution he ordered the the ships of the fleet be chained together to prevent the British from breaking the line.

During the search for Brueys’ fleet, Nelson had taken the time to meet frequently with his captains and thoroughly schooled them in his approach to naval warfare, stressing the individual initiative and aggressive tactics. These lessons would be put to use as Nelson’s fleet bore down on the French position. As they approached, Captain Thomas Foley of HMS ​‘Goliath’ (74 guns) noticed that the chain between the first French ship and the shore was submerged deep enough for a ship to pass over it. Without hesitation, Hardy led five British ships over the chain and into the narrow space between the French and the shoals.

His manoeuvre allowed Nelson, aboard HMS ​‘Vanguard’ (74 guns) and the remainder of the fleet to proceed down the other side of the French line sandwiching the enemy fleet and inflicting devastating damage upon each ship in turn. surprised by the audacity of the British tactics, Brueys watched in horror as his fleet was systematically destroyed. The climax of the battle occurred when the French flag ship ​‘L’Orient’ (110 guns) caught fire and exploded, killing Brueys and all but 100 of the ships crew. As the battle drew to a close, it became clear that Nelson had all but annihilated the French fleet.

The only institutional example of the present work we could trace is in the National Maritime Museum, Greenwich. We are unable to trace another example of the work appearing at auction.