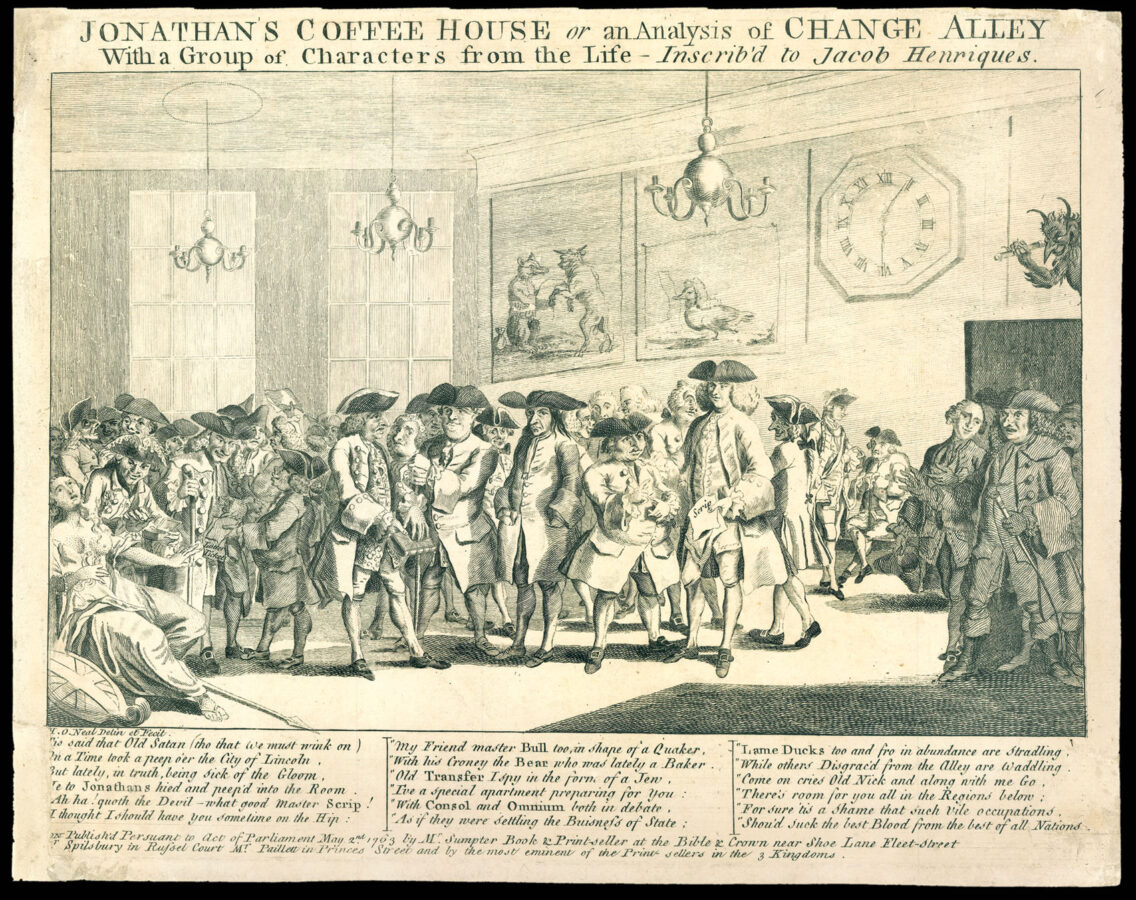 Jonathan’s Coffee House or an Analysis of Change Alley. With a Group of Characters from the Life — Inscrib’d to Jacob Henriques.

The print shows the interior of a large room with a crowd of stock dealers, with some possibly being portraits of contemporary figures. The verse at the bottom of the print imagines the thoughts of the Devil, who peers in through a telescope above the open door on the right hand side, welcoming the dealers as future inhabitants of Hell. On the left, there is an anti-Semitic portrayal of a bearded Jew lurking threateningly behind the swooning figure of Britannia, who holds three snakes to her breast in an imitation of the death of Cleopatra. The figures throughout the room represent the various financial practices outlined in the accompanying verse. A small man offers lottery tickets to an older man with a stick; a tall man in a bushy wig holds a paper marked ​‘Scrip’, representing a subscription receipt; the gloomy long haired man looking out of the print is a Quaker, reflecting the growing power of Quaker businesses. The pictures on the wall of the bull, bear and lame duck are references to terms used on the exchange.

The room is Jonathan’s Coffee House, one of a number of coffee houses and meeting places on ​‘Exchange Alley’, described as ​“the general-mart of stock-jobbers” by Tatler at the time. It is considered to have been the original site of the London Stock Exchange, after a Huguenot banker called Jonathan Castaing began to post a biweekly digest of stick prices, bullion prices and exchange rates there in 1698. This coincided with the expulsion of a number of dealers from the Royal Exchange for rowdiness; they relocated to Jonathan’s and other nearby institutions. By the time this print was produced, Jonathan’s was well-established as a centre of financial trade; it had burned down and been rebuilt in 1748, and in 1761 150 of the brokers and dealers had formed an official club to buy and sell shares there.

The print refers to the financial panic at the end of the Seven Years War, when excessive lending led to a collapse of the credit structure throughout Europe. English stocks were particularly affected by Dutch investors who recalled capital. Fluctuations in the money markets were prime targets for caricaturists and satirists, particularly after the considerable impact of the South Sea Bubble in 1720.