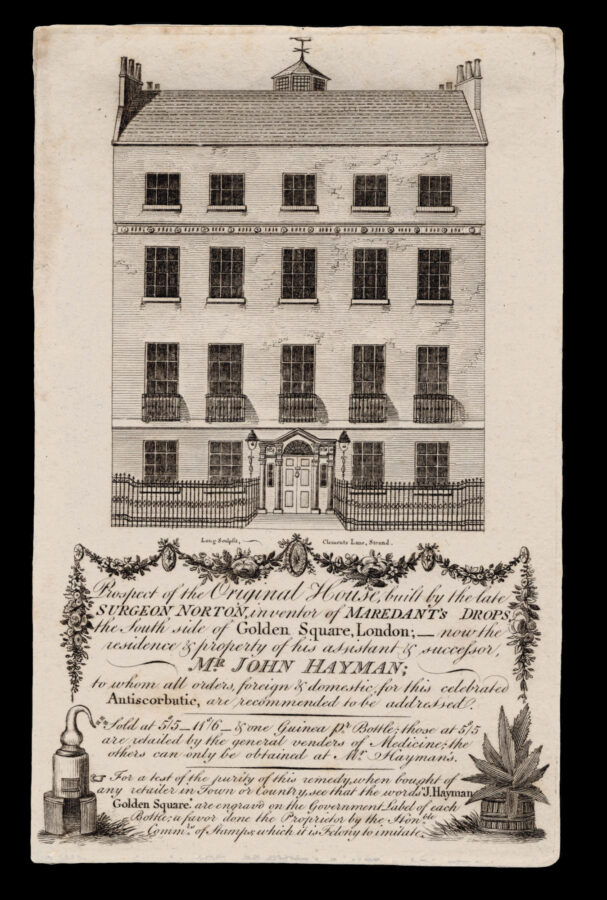 Q is for Quack

Prospect of the Original House, built by the late Surgeon Norton inventor of Maredant’s Drops,…; now the residence & property of his assistant & successor, Mr. John Hayman; to whom all orders, foreign & domestic for this celebrated Antiscorbutic, are recommended to be addressed.

In 1772, John Hayman published ​‘An account of remarkable enres, performed by the use of Maredant’s antiscorbutic drops, prepared by John Norton, surgeon’, two copies of which are listed in the ​‘Index Catalogue of the Library of the Surgeon-general’s Office, United States Army’ (1891). Hayman claimed that he was the successor to a Surgeon Norton, who had developed medicinal drops to cure all manner of illness, from gout to nervousness, but the principle target of which was scurvy. These antiscorbutics were known as Surgeon Norton’s Drops, and later as Maredant’s Drops.

In 1783, Hayman began to issue advertisements addressed ​‘to the Scorbutic, Scofulous, Leprous, Gouty, Rheumatic & Nervous’, encouraging them to purcase Hayman’s Maredant’s Antiscorbutic Drops at five shillings three pence a bottle, which he claimed was equal to those of his predecessor. Around the same time, a different advertisement for the medicine was in circulation, this time being accompanied by a pamphlet which presumably extolled its virtues as a remedy for all manner of common afflictions. Another card from 1784 announces that Mr Hayman was removed from Queen Street, Golden Square, where he had previously been established, to No.10, Great Marlbro Street. Nonetheless, he would continue to sell his antiscorbutic drops, but for the slightly increased price of five shillings five pence.

Fleet Street chemists Barclay and Son bought the recipe for Maredant’s Drops from Hayman on his retirement, producing an advertising pamphlet in 1820 containing what appears to be a testimonial from a real customer, claiming that ​“the benefit I have derived from the use of Hayman’s Maredant’s Drops is such that I cannot forbear to add my testimony to the value and efficacy of that excellent medicine”.

Despite all this effective advertising, it is unlikely that Maredant’s Drops had any real effect and in fact there is no trace of a Surgeon Norton developing such a medicine dated before Hayman’s first mention of him. It seems probable therefore, that Surgeon Norton was a figure invented by Hayman to lend authority and credibility to his new invention. The present trade card shows the house on Golden Square where Hayman was originally based, along with what is presumably a bottle of the drops and a plant from which its ingredients may have been extracted. It was engraved by Joshua Long, who was active at Clements Lane, the Strand, in the final decades of the eighteenth century. 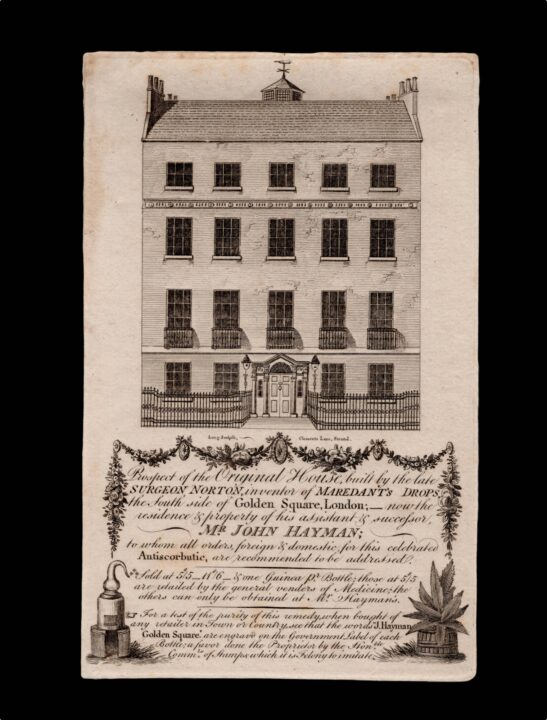