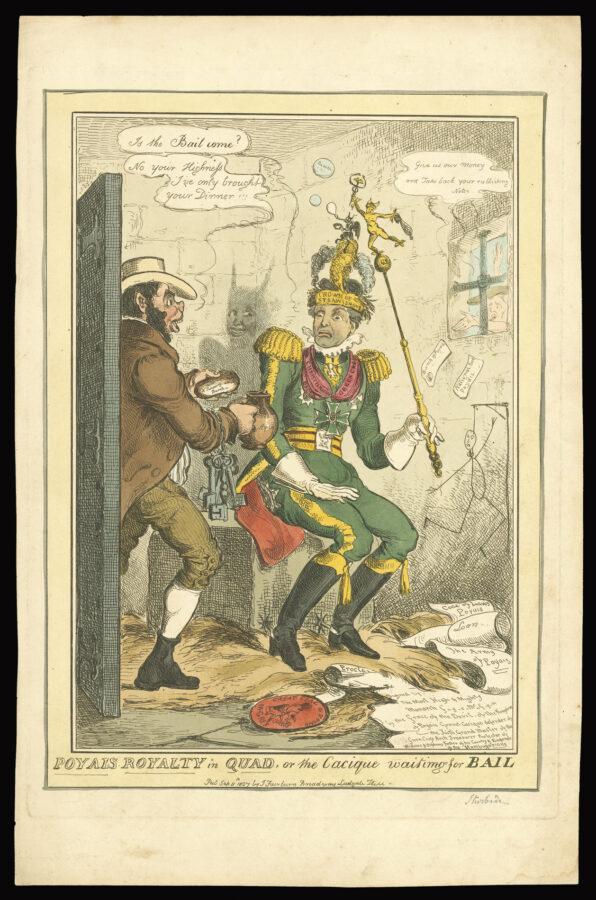 Poyais Royalty in Quad or the Cacique waiting for Bail.

Caricature of the conman Gregor MacGregor, self-stylied Cacique of Poyais.

​“Gregor Macgregor, in exotic uniform, sits in a prison cell, on a block of stone, his feet upon straw. He wears a Crown of Straw & Smoke [so inscribed], the circlet of straw, the superstructure of smoke. On its apex sits a tiny demon blowing soap-bubbles, the biggest inscribed Bubble. In his left hand is a sceptre terminating in a ball inscribed G.I [Gregor Imperator], on which a little Mercury is poised holding out a purse, and, above the demon, a caduceus. A jailer, with hideous features, enters (left), a large bunch of keys slung from his arm, a jug of Aqua in one hand, a minute loaf inscribed Twopenny Burster [Bread. Partridge, Slang Diet., citing ​‘Ducange Anglicus’. See No. 14758] in the other. The prisoner asks: Is the Bail come? Jailer: No your Highness I’ve only brought your Dinner!!! G. M. wears a green and gold uniform with large high epaulets, tight collar and ruff, and many orders, including a large Maltese cross inconspicuously inscribed Lies, Deceit; this hangs from his neck on a wide ribbon: Christian Order Green Cross. Besides the stars on his breast there is a large one on his breeches. At his feet are bulky documents. To one a huge seal is attached: Great Seal of Poyais M.G Rex, with a device of a crowned giant (H.L.) swallowing a human being, each hand clasping another victim. This is a (torn) Procla[mation] … Signed by The Most High & Mighty Monarch G—g—r— Mc G—g—r by the Grace of the Devil, of the Kingdom of Poyais Grand Cacique defender of the Faith Grand Master of the Green Cross Arch Treasurer Protector of Widows & Orphans Father of his Country & Emperor of the Humbugarians. Three other scrolls are: Code of Laws Poyais; Loan; The Army of Poyais. His shadow falls on the wall behind him, in the form of a devil with horns (reversing a print of Napoleon, 1814, as the Devil’s shadow, vol. ix, p. xvii); the surprised features and down-drawn mouth of the original are transformed into a sideways grin. Through a small barred aperture (right) are seen a gaunt angry face, and two raised arms. A clamour of creditors is represented by a label floating into the cell: Give us our Money and Take back your rubbishing Notes; two notes are flung through the opening, inscribed Bank of Poyais and National Bank of Poyais. Under the window a man hanging from a gibbet is scrawled on the wall.”