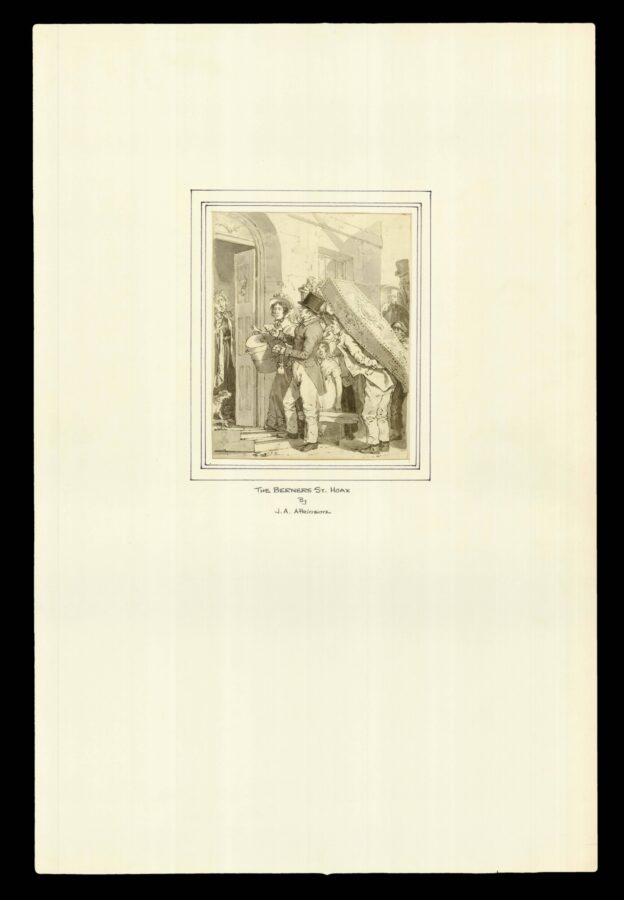 An original watercolour of the Berners Street Hoax, a notorious affair, which became the subject of many satirical cartoons like this one. Another version, by Atkinson, is held in the Museum of London. Quite why Theodore Hook (1788–1841) persecuted the poor Mrs. Tottenham in 1809, is not known, but clearly drawing on all his evidently immense wit and ingenuity, he wrote letters to ​“tradesmen and others, as well as appeals to the Duke of York (then Commander-in-Chief), the Lord Mayor, and others to visit her. Hook was suspected by his friends, but the secret was kept. Much material damage was done in the crowded street” (George, ​‘Catalogue of Political and Personal Satires in the British Museum’, VIII, 1947).

John Augustus Atkinson’s (1774 — 1830) accompanied his stepfather to Russia and the court of Catherine the Great, when he was only eight. There he learned to paint, almost exclusively military scenes in oils. However, when they returned to London in 1802 he switched to watercolours and aquatint. His work had ​“something of the lively and happy interest in human life of Thomas Rowlandson and the caricaturists of the period… His occasional weaknesses in draughtsmanship were more than compensated for by the sharpness of his observations and the vitality and liveliness of his compositions” (Alan Bird for DNB).