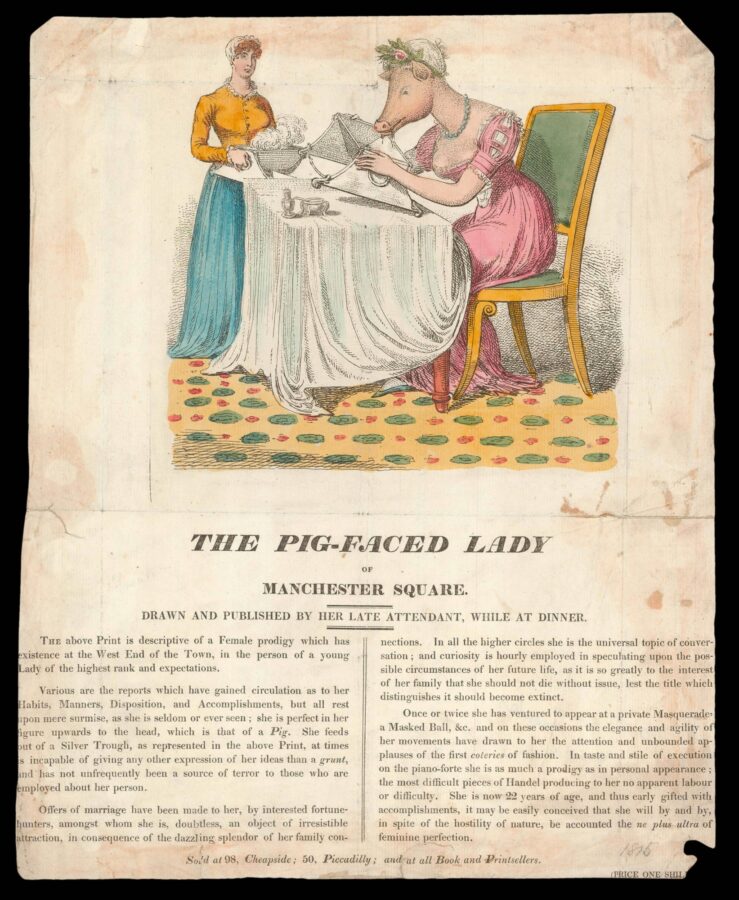 “Fancy a date with an eligible young lady who’s looking for a man to share her family’s vast fortune with? Who wouldn’t right? Well there’s a slight catch; the girl in question happens to have the head of a fully grown pig. Still interested?

Believe it or not, this was a proposition which many young men in London were giving serious consideration during the winter of 1814–15. A series of bizarre rumours began to circulate around town, of a pig-faced woman who was said to be living in luxurious apartments located somewhere in the up-market district around Manchester Square. This girl was reported to be the sole heiress of a wealthy family from a remote region of Ireland, and she had been dispatched to London in order to find a husband who could take charge of the vast fortune she was due to inherit.

It was said that a number of aristocratic young bachelors had already sallied forth to present themselves at her door, but had ended up beating a hasty retreat after being subjected to the spectacle of their intended dining from her favourite trough, or conducting a conversation in porcine squeals and grunts. And so, after several weeks of futile searching, the pig-faced lady, still sat alone in her opulent rooms, waiting for a man with a sufficiently strong stomach to come forward and claim her.

While most Londoners instantly dismissed such talk as errant nonsense, greed overcame the common sense of a good many and the story proved to be stubbornly persistent. By the spring of 1815, newspaper advertisements began to appear from impoverished gentlemen who earnestly wished to solicit a meeting with the pig-faced lady, while others offered their services as companions or employees in her household. Such symbols of public credulity particularly irked the editors of the Times, who finally attempted to quash the story once and for all in a fantastically sarcastic editorial published on 16th February 1815:

​“There is at present a report, in London, of a woman, with a strangely deformed face, resembling that of a pig, who is possessed of a large fortune, and we suppose wants all the comforts and conveniences incident toward her sex and station. We, ourselves, unwittingly put in an advertisement from a young woman, offering herself to be her companion; and yesterday morning, a fellow (with a calf’s head, we suppose) transmitted to us another advertisement, attended by a one pound note, offering himself to be her husband. We have put his offer in the fire, and shall send his money to some charity, thinking it a pity that such a fool should have any. Our rural friends hardly know what idiots London contains”.

The editorial then went on to point out that similar stories had been reported in the past:

​“The story, however, is an old one. About 50 years ago, it is well recollected by several elderly people, there was exactly the same rumour. It was revived with but slight effect about 30 years since; and now comes forth again in its pristine vigour. On the original invention of the pig-faced woman, about the year 1764, a man offered himself to make her an ivory trough to feed out of; which can only be considered as a feeble type of the silver cradle actually presented in our day. Besides, there was but one actor in the first folly, and there have been twenty in the latter”.

In fact, rumours such as this had been spontaneously popping up across western Europe since the early 1600s. It seems likely that they were initially linked to exaggerated horror-stories about the malign effects of witchcraft which gradually evolved over time to become part of popular folklore. The social function of the tale also appears to have changed, becoming a humorous means by which to gauge the apparent depths to which one’s acquaintances were willing to sink in exchange for money.” (The Print Shop Window, commentary on a similar, but not identical, print issued by the same publishers).

The caricature-illustrated handbill above was jointly published by S.W. Fores and John Johnston sometime during 1814–15 (the publication line has been trimmed from this example but the addresses of the two printsellers remain). It was one of a number of prints to have been produced on the subject of the pig-faced lady around this time. It shows London’s most eligible bachelorette eating from a silver trough and is accompanied by a short textual summary of her background and family history. The narrative plays it pretty straight and is largely devoid of any obvious signs of humour, suggesting that even if Fores and Johnston weren’t taken in by the rumours themselves, they were happy to let their customers make up their own minds as to whether there really was a pig-faced lady living on Manchester Square. 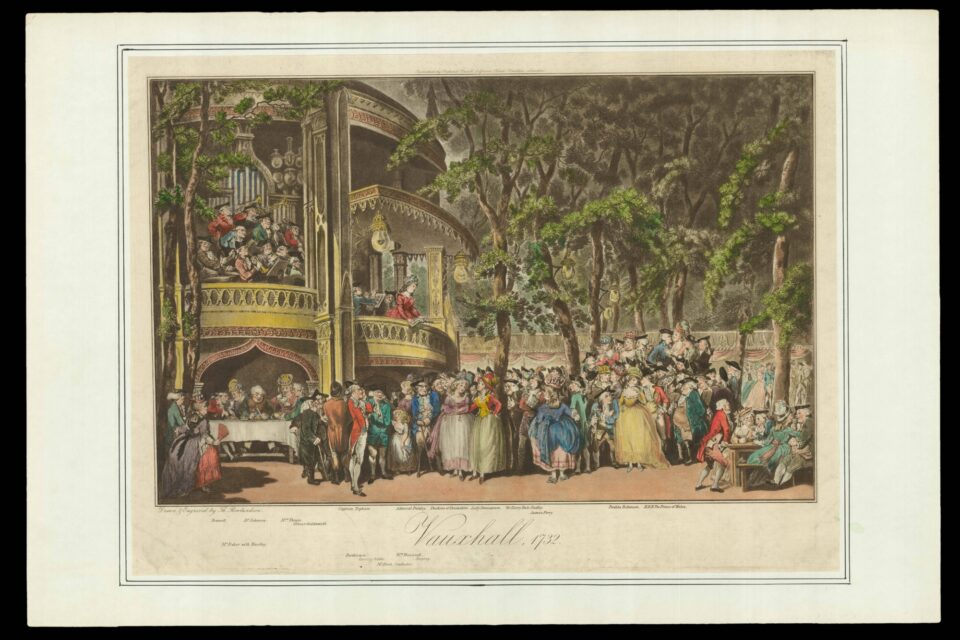