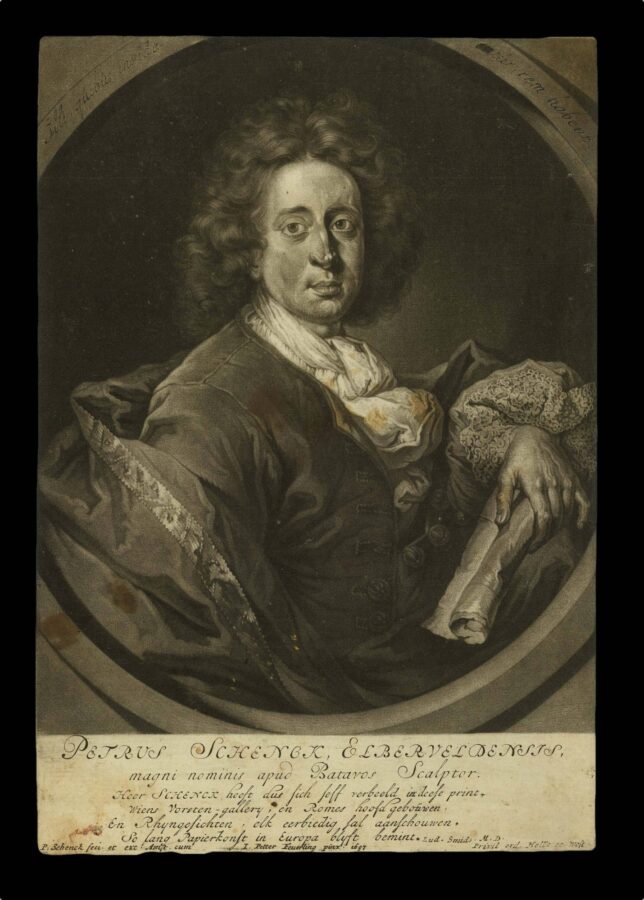 At the age of 15, Peter Schenck (1660-c1718) moved to Amsterdam from his native Germany to learn the art of mezzotint. After completing his training he established himself as an engraver and printer, and produced a vast array of prints, including portraits, prospects and urban views. It was not until the 1690s, however, that Schenck properly entered the field of cartography, acquiring the stock of Jan Janssonius and subsequently printing a wide range of maps by the likes of Janssonius, Visscher, de Wit, Van Keulen, Danckerts, and his mentor, business partner and brother-in-law, Gerard Valk. Together with Valk, Schenck republished Jan Jansson’s maps and Andreas Cellarius’s celestial atlas, the ​‘Harmonia Macrocosmica’.

Set in an oval frame, the present portrait shows Schenck wearing billowing embroidered robes and clutching a furled scroll. Accompanying the portrait are verses praising Schenck by Dutch writer Ludolph Smids. According to the imprint along the lower edge, the image was engraved and printed by Schenck himself from a painting made by Johann Peter Feuerling in 1697.