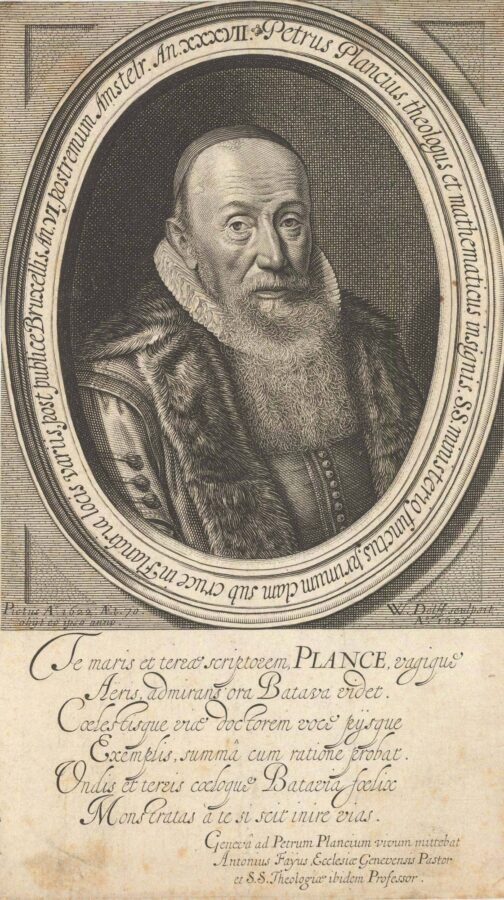 As a Protestant minister, Flemish theologian Petrus Plancius (1552–1622) was forced to flee Brussels in 1585, when the city fell into the hands of Spain. Plancius settled in Amsterdam, where he began a cartographical career that would see him become one of the foundational figures in the Dutch Golden Age of cartography. Studying Portuguese charts and forming friendships with the city’s leading publishers and travellers, including the explorer Henry Hudson, who would travel to the New World several times in the early seventeenth century, Plancius expanded his knowledge of navigation, geography and mapmaking. Over one hundred of his maps and charts were drawn for the Dutch East India Company, which Plancius helped to found and of which he was the first hydrographer.

This portrait, showing the bald and bearded Plancius wearing a fur-trimmed coat, was made by Willem Jacobsz Delff in 1623. Delff engraved many portraits painted his fellow resident of Delft, Michiel van Mierevelt, during the first half of the seventeenth century. Beneath the portrait six lines of Latin verse read: ​“Te maris et terrae scriptorem, Plance, vagique / Aeris, admirans ora Batava videt. / Coelestisque viae doctorem voce jusque / Exemplis, summa cum ratione probat. / Undis et terris coeloque Batavia foelix / Monstratas a te si scit inire vias” (‘Plancius, you scribe of the sea and land, and wanderer of the sky, the Netherlands look on your portrait with admiration. With the greatest reasoning, you show yourself a master of the heavenly path, in your speech as well as your actions. The fortunate Netherlands knows how to travels the paths set out by you, through wave and land and sky’). There is also a dedication explaining that this engraving was sent to Placius by Antonius Fayus, a pastor and professor in Geneva.