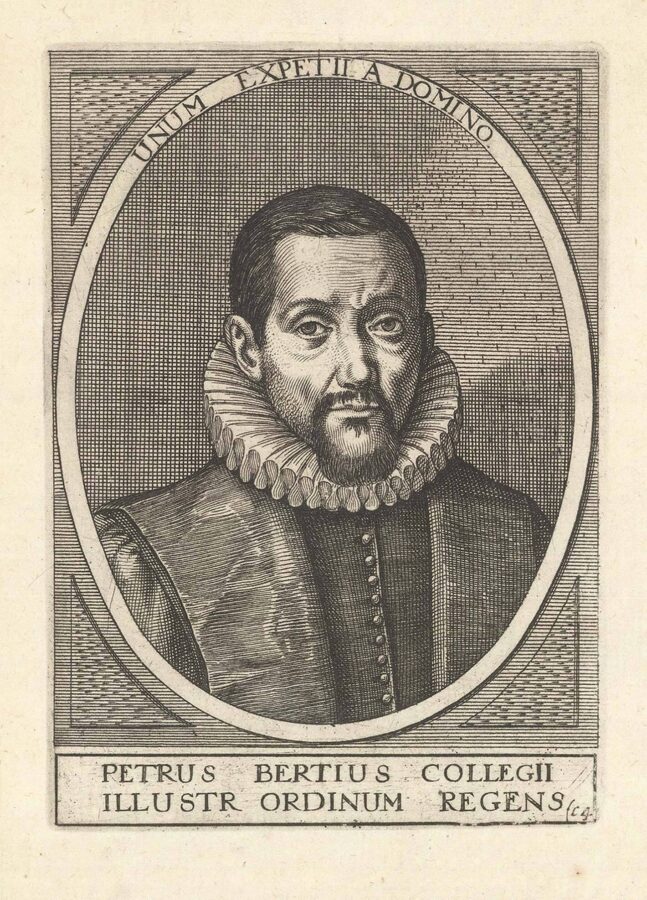 Portrait of Petrus Bertius (1565–1629), Flemish polymath whose range of abilities spanned the fields of mathematics, history, theology, philosophy, geography and cartography. Bertius had travelled extensively through Europe before moving to Amsterdam to escape religious persecution, where he published many of his works, the most important being his edition of Ptolemy’s ​‘Geographia’. The ​‘Tabularum Geographicarum’, with engravings by well-known cartographical figures such as Jodocus Hondius and Pieter van den Keere, to both of whom Bertius was related by marriage, was so influential that in 1618, he was appointed Official Cosmographer to Louis XIII. Bertius’ atlas even came to rival Mercator’s ​‘Atlas Minor’ in its popularity and commercial success.

During the early years of the seventeenth century, Bertius’ portrait was engraved by Willem van Swaenburg as part of a series of thirty-four portraits of Leiden professors, published by Andries Clouck in the same city in 1609. Bertius had studied at the University of Leiden as a young man, and held teaching positions there from 1593 until the late-1610s. As in every portrait in the series, Bertius is represented as a bust in an oval with a title below giving his name and position. In addition, a Latin phrase within the frame identified Bertius as ​“unum expetii a domino” (‘one of those chosen by God’). Swaenburg’s portraits were reused multiple times over the following decades, with all except one copied in reverse for a biographical work entitled ​‘Alma Academia Leidensis’ first published in 1614.