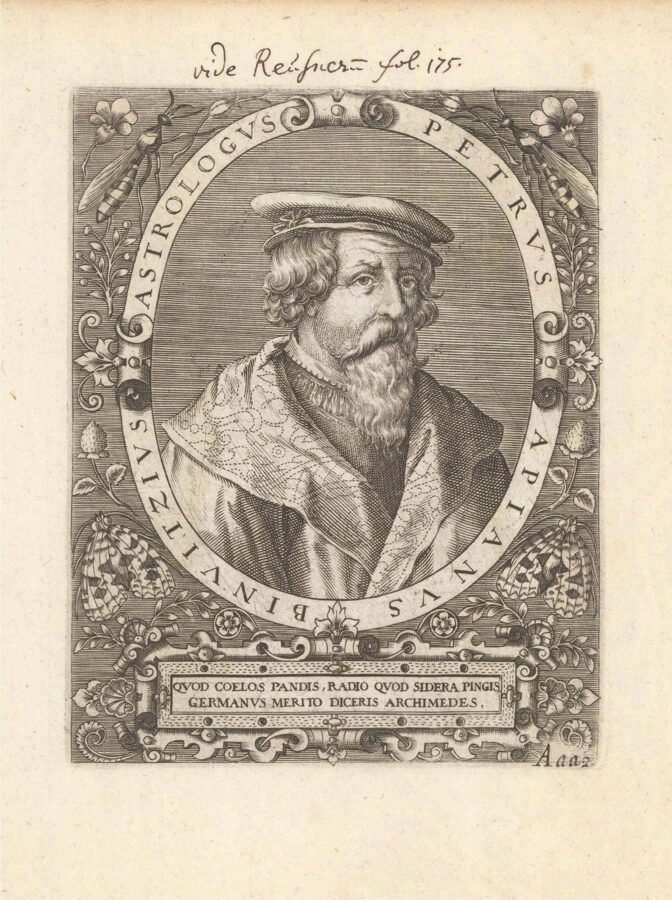 Portrait of Petrus Apianus (1495–1552), mathematician, astronomer, and cartographer to The Holy Roman Emperor Charles V. His ​‘Astronomicum Caesarum’ (1540) is rightly seen as the most beautiful scientific work published in the sixteenth century. Beautifully illustrated and filled with intricate volvelles, or Apian wheels, the book could be used to calculate everything from eclipses to the hour of a baby’s conception.

The portrait was made by Johann Theodor de Bry, son of the engraver, goldsmith, publisher and editor, Theodor de Bry, who took over his father’s printing house in Frankfurt in 1598, and continued producing portraits and other engravings until his death in 1623. Both father and son worked extensively on portraits of illustrious figures, both contemporary and historic, and it appears that the son added Apianus to their collection around the turn of the seventeenth century.

The engraving was later found in Jean-Jacques Boissard’s ​‘Bibliothecae chalcographicae’, a portrait gallery of initially one hundred, and later 438, engravings and biographies of humanists, scientists and reformers, published in 1650. The engraving shows a bust of the cartographer in three-quarter perspective, wearing a flat cap and embroidered collar. His portrait is framed by an oval border reading ​“Petrus Apianus Binuitzius Astrologus”, surrounded by illustrations of wasps, butterflies, flowers, strawberries and branches of laurel. Along the lower edge a cartouche reads: ​“Quod coelos panis, radio quod sindera pingis germanus merito diceris Archimedes” (‘Since you expand the heavens, since you show the stars with your spoke, you are deservedly called the brother of Archimedes’).