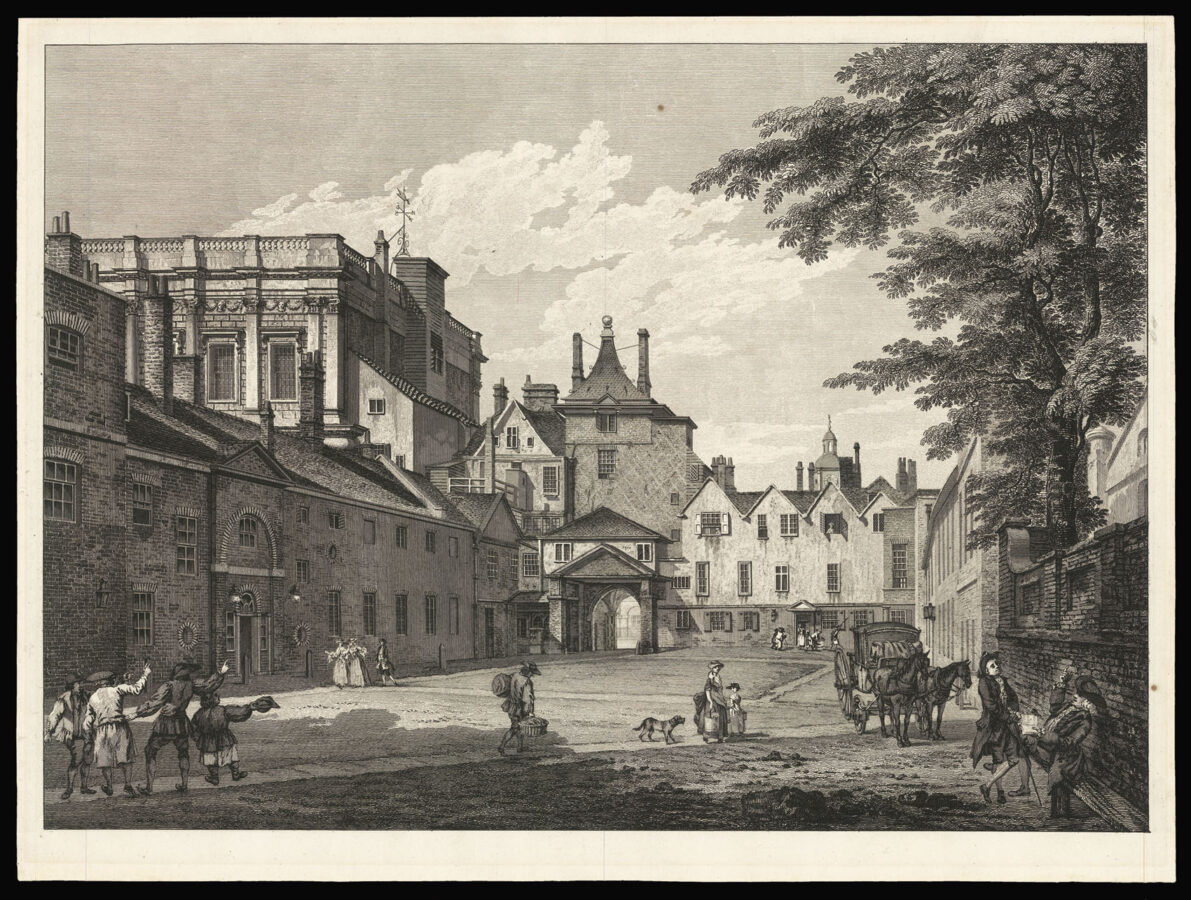 In late 1766, the printmaker and publisher Edward Rooker began taking subscriptions for ​“Several Views in London and Westminster,” scenes in and around Covent Garden and Whitehall as well as of Blackfriars Bridge ​“as it was in July” of that year. A view of Horse Guards and a further Covent Garden scene were added to this set of four urban prospects in early 1768. While Rooker himself undertook the etching of these ambitious plates, and probably also composed the perspective view of the bridge in mid-construction, the scenes were largely after designs by two of the leading figures of the London art world, Paul and Thomas Sandby. The design for the view of Horse-guards was attributed to Michael ​“Angelo” Rooker, the printmaker’s son, though this may well also be after the Sandbys. The views comprise:

[1. Whitehall Court with part of the Banqueting House (erroneously
called Scotland Yard in the titled impression)]
Jones’s Banqueting House, the only remnant of the Palace of Westminster, destroyed by fire in 1698, is seen from a court in Whitehall. It towers over an enclosed but untidy space, one that presented ​“nothing more than a scene of desolation and deformity” animated here largely by servants and river men. Scotland Yard had been a place of residence for Jones and Sir Christopher Wren as well as having literary connections, with the royalist poet and surveyor Sir John Denham and also with the playwright and architect Sir John Vanbrugh. Vanbrugh’s house there, erected on the site and out of the bricks and stones of the ruined palace, despite attempts by Wren to block construction, was satirized by Jonathan Swift in Van’s House (published about 1703-10), which is being discussed by two men in the foreground of the Sandbys’ design. An original drawing of the courtyard, now in the collection of the Guildhall Library, London, is almost certainly attributable to the elder Sandby.

[2. Part of the Bridge at Blackfriars]
Edward Rooker’s view, in which neither Sandby appears to have had a hand, alludes to a still more contentious public building project. ​“Blackfriars had been commissioned by the Corporation of London as the city’s tribute to ​“the glorious summer” of 1759 and so originally named Pitt Bridge, with the adjacent streets to be called (in honour of
the great earl and architect of the nation’s imperial triumphs) Chatham Place, William Street, and Earl Street. A dedicatory inscription to Pitt, described by Horace Walpole as of a ​“very Roman air, though very unclassically expressed,” pronounced the bridge ​“a monument of this city’s affection to the man who, by the strength of his genius… recovered, augmented, and secured the British Empire in Asia, Africa, and America, and restored the ancient reputation and influence of his country amongst the nations of Europe.”. However, in the wake of the controversial Peace of Paris, which concluded the Seven Years’ War, the monastic locality asserted its prior right and the bridge became known as Blackfriars. Robert Mylne’s startling design, which had included statuary commemorating naval victories, was stripped back. His sculptural program fell victim to spiralling costs, although the changed political climate, marked by the removal of the hawkish Pitt from office, also made the bellicosity of its imagery appear dated” (Bonehill).

[3. The Horse Guards]
The new Horse Guards was built by John Vardy after a design by William Kent. ​“Framed by a decrepit archway — possibly the medieval gate that features at the far end of the Scotland Yard scene — conveys a sense of the cramped confines of the city streets bemoaned by contemporaries, the lack of striking vistas afforded by existing layouts. There is also the familiar rough mix of people, including a blind beggar and a family of brush-sellers loaded with wares, and two fashionably dressed women as well as horse-guards standing sentry[…] Rooker the younger’s glimpsed view of Horse-guards employs a […] theatrical device, with the crumbling gate forming a proscenium arch. Yet the tawdry figures as well as the picturesque decay of their immediate surroundings, prominent in the foreground, do not appear in this instance to enhance the grandeur of the building in view. It is literally a view from below, socially as well as spatially” (Bonehill).

[4. West front of St Paul’s, Covent Garden]
​“While Covent Garden, as redeveloped in the 1630s by Jones for Francis Russell, fourth Earl of Bedford, was held up as a model of civic planning and elegance, it was no longer inhabited by the gentlemen it had been built to house. Its commercial function had long come to dominate its residential one and it had become associated with retail and entertainment, not only the theater but also taverns, coffee houses, and brothels. According to one architectural commentator, writing in the early years of the reign of George III, Jones’s St. Paul’s in Covent Garden had the reputation of being ​“the finest Barn in England.” Views of the church invariably focused on the severe Tuscan-temple front of the east end facing out onto the market square, a situation that accentuated these pastoral associations. Thomas Sandby’s view of the west front was highly unusual, if still showing the church in dramatic contrast with the commercial and residential buildings that hem it in. ​‘The West Front of St Paul’s Covent Garden’ features a blackly comic collision, showing a funeral procession amid the street traders and beggars. In the elder Sandby’s view, through the square’s colonnade from the southeast, the arches frame a series of incidents featuring characters across the social spectrum, of varied ages, at work and at play” (Bonehill).

[5. Covent Garden Piazza]
Covent Garden seen from the south east side of the colonnade, with figures including a woman selling goods on the right, a pair of shoe shiners, a beggar, a gentleman and lady walking, a boy with a hoop and two boys playing marbles in the foreground to left; others leaning on wooden railings and selling goods from large baskets in the middle of the square.

[6. View of St James’s Gate from Cleveland Row].
The view looks east down Pall Mall from outside the entrance to St. James’s Palace. Sedan chairs jostle for space alongside stonemasons; a palace guard chats up a milkmaid, and a postman delivers a letter to a smart house in Cleveland Row.

Edward Rooker (c1712-1774) was a draughtsman and engraver of topographical and architectural views. He lived and worked in London so his most famous work concentrates on the city’s landmarks. He also worked on plates for Sir W. Chamber’s ​‘Civil Architecture’, James Stuart’s ​‘Antiquities of Athens’, and Robert Adam’s ​‘Ruins of the Palace of Diocletian’.
Paul Sandby (1725–1809), by contrast, reveled in the rural landscape and was one of the first artists to realize the potential of aquatint in reproducing the subtleties of watercolour in print. Although Paul Sandby is best known for his landscapes, he also produced some fascinating images of contemporary London. Many of his scenes are enlivened by figurative detail in the foreground.