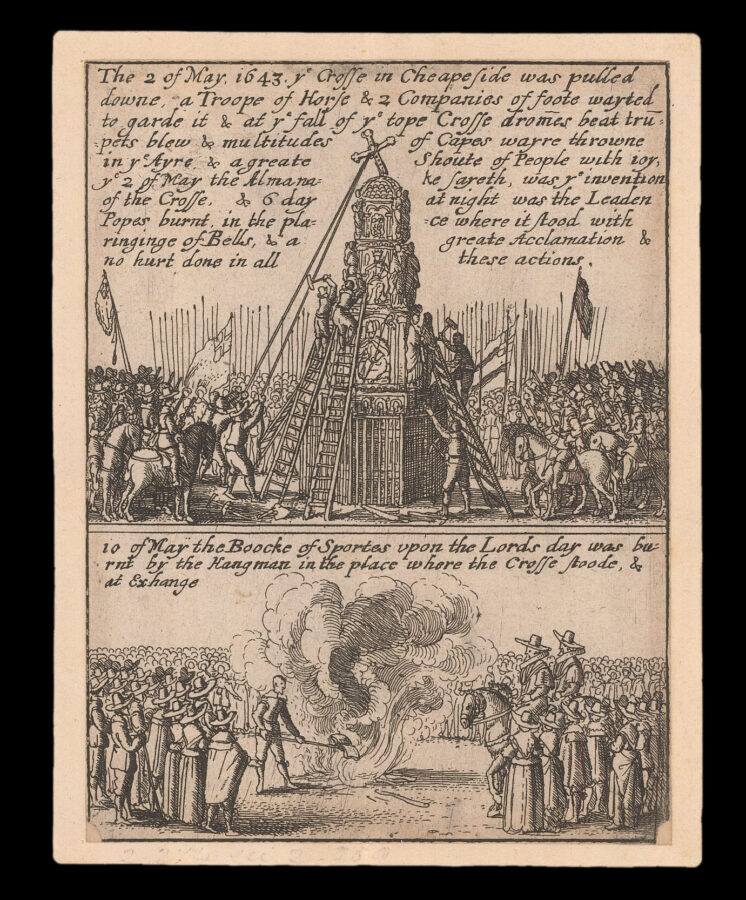 All the memorable & wonderstrikinge Parlamentary mercies effected for & afforded unto this our English Nation, within this space of lesse than 2 yeares past A.o 1641 & 1642.

Protestant schoolmaster John Vicars became a well-known pamphleteer in the run up to and during the Civil War, in which he supported the Parliamentarian forces. In 1642, he produced a pamphlet entitled ​‘All the memorable & wonderstrikinge Parlamentary mercies effected for & afforded unto this our English Nation, within this space of lesse than 2 yeares past A.o 1641 & 1642’, which contained ten plates by Hollar. Each of these, which appeared also in Vicars’ pamphlets of 1646, 1648, 1651 and 1652, were split horizontally into two prints showing different scenes.

Among these is a scene showing the events of May 2, 1643, ​“ye Crosse in Cheapeside was pulled downe, a Troope of Horse & 2 Companies of foote wayted to garde it & at ye fall of ye tope Crosse dromes beat trumpets blew & multitudes of Capes wayre throwne in ye Ayre & a great Shoute of People with ioy, ye 2 of May the Almanake sayeth, was ye invention of the Crosse, & 6 day at night was the Leaden Popes burnt in the place where it stood with ringinge of Bells & a greate Acclamation & no hurt done in all these actions”.

In the late thirteenth century, the queen consort Eleanor of Castile died during a pilgrimage in the East Midlands, and her husband King Edward I ordered a series of ​‘Eleanor crosses’ to be stationed at each of the twelve sites at which the procession bearing her body back to London had stopped. Two of these were put up in LLondon, at Cheapside and at Charing Cross. During the Civil War, these crosses were seen as a symbol of royal oppression, and both were destroyed by Parliamentarians in the 1640s. The diarist John Evelyn recorded that on May 2, 1643, ​“I went from Wotton to London, where I saw the furious and zealous people demolish that stately Cross in Cheapside”.

Hollar, himself a royalist, depicted the destruction of the cross in a small etching showing a large crowd, many on horseback, gathered around the monument, as men on ladders hack at its plinth and two more pull down the cross atop with ropes. Accompanying the scene is another vignette showing an event that occured just over a week later on the same site: ​“10 of May the Boocke of Sportes upon the Lords day was burnt by the Hangman in the place where the crosse stoode, & at Exchange
”. It shows Parliamentarians burning the ​‘Boocke of Sports’, a declaration by James I, reissued by Charles I, listing the sports and recreations permitted on Sundays and other holy days. Its perceived leniency was fiercely opposed by the Puritan factions, resulting in ceremonial burnings, as shown here.

The upper scene on the second prints shows the Battle of Edgehill, the early and inconclusive conflict in the Civil War that prevented either side gaining enough power to end the war sooner. The lines of cavalry, canons and infantrymen are surmounted by a legend describing the scene. The lower scene shows six ships on the turbulent ocean waves. The legend explains that a large part of the royal treasury was sunk of damaged aboard these ships when the Queen was sailing abroad. Henrietta Maria had journeyed to the Hague early in 1642, which is the voyage probably depicted here, although it is recorded that the following year her attempt to return to England was hampered by storms that almost sunk her ship and forced her make a hasty return.

The third print shows soldiers and other figures embarking from a pier into boats on the upper design. These vessels were used to allow the members of the Houses of Commons and Lords to safely depart from Parliament in the dangerous circumstances brought on by the Civil War. The legend explains that these small boats were ​“furnisht with Ship-guns & other Warrlike instruments” and indeed there seems to be smoke billowing from many of them. In the lower view numerous representatives from the counties of ​“Buckingham… Essex, Hertford, Barkshire, Surrey & others” travelling on horseback to London to present a petition to Parliament. 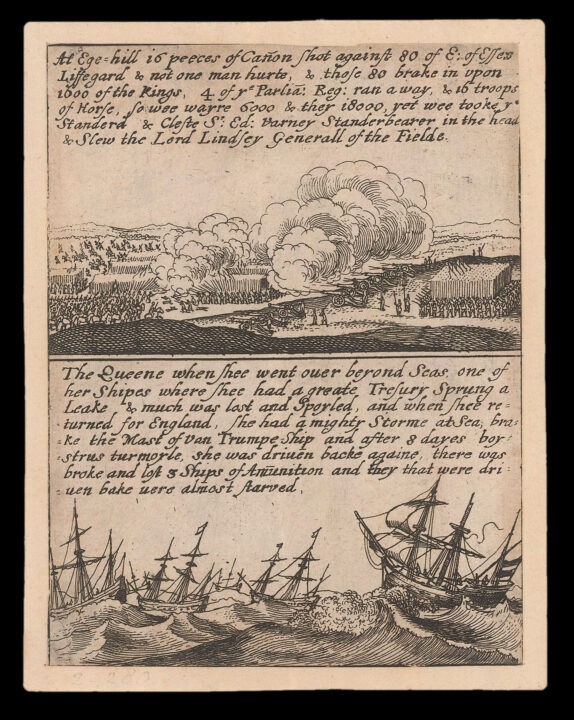 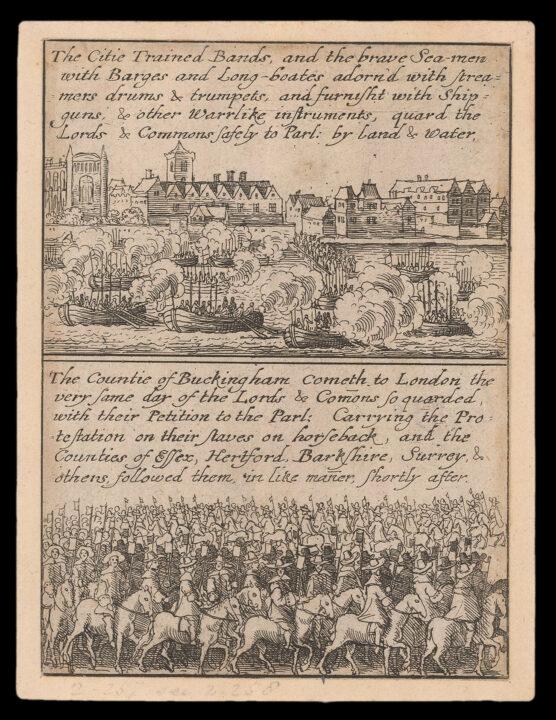