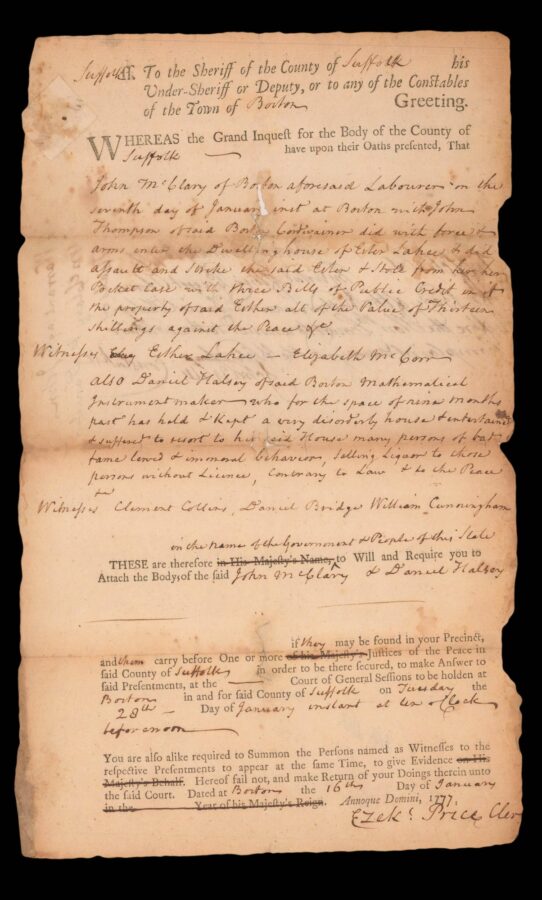 One of the earliest African-American navigational instrument-makers in Massachusetts

Daniel Halsey, described in this document as a mathematical instrument-maker and keeper of a disorderly and immoral house in Boston, appears elsewhere in documents as a ​“free” African American. He was possibly a descendent of, or more probably, took the name on his freedom of, the family of Joseph Halsey [fl from 1702], also of Boston, and one of a surprisingly small number of Massachusetts craftsmen working before the end of the eighteenth century, who produced nautical scientific instruments. Records are not complete, but it is more than likely that Daniel Halsey is the earliest known African-American navigational instrument-maker. Halsey is recorded as renting a house on Fore Street in the North End of Boston, and he occasionally ​“took in white lodgers” (Dayton & Salinger).

In January of 1777, Halsey was called as a material witness in the case of the assault and robbery of one of his lodgers, Esther Lahee, and this warrant, or summons, was issued for his arraignment before the next court of sessions on the 28th.

The letterpress form used to record the details of the warrant, is one that had been in use for many years, since all references to ​“His Majesty” have been scored through. Massachusetts declared independence on the 4th of July 1776.

​‘WHEREAS the Grand Inquest for the Body of the County of ​“Suffolk” have upon their Oaths presented, That

​“John McClary of Boston aforesaid Labourer on the seventh day of January inst at Boston with John Thompson of said Boston [?]Cordivainer did with force & arms enter the Dwelling house of Ester [sic] Lahee & did assault and Strike the said Ester & Stole from her her Pocket Case with three Bills of Public Credit in it the property of said Esther all of the Value of Thirteen Shillings against the Peace etc.

Witness Esther Lahee – Elisabeth McCorr also Daniel Halsey of said Boston Mathematical Instrument Maker – who for the space of nine months past has held & kept a very disorderly house & entertained & suffered to resort to his said House many persons of bad fame lewed [sic] & immoral behavior, selling Liquor to those person without Licence, Contrary to Law & to the Peace etc.

THESE are therefore [in His Majesty’s Name] ​“in the name of the Government & People of this State”, to Will and Require you to Attach the Body“s” of the said ​“John McClary & Daniel Halsey” if ​“they” may be found in your Precinct, and ​“them” carry before One or more [of his Majesty’s] Justices of the Peace in said Count of ​“Suffolk” in order to be there secured, to make Answer to said Presentments, at the “—-” Court of General Sessions to be holden at ​“Boston” in and for said County of ​“Suffolk” on ​“Tuesday” the ​“28th” Day of ​“January instant at ten o’Clock before noon“

You are also alike required to Summon the Persons named as Witnesses to the respective Presentments to appear at the same Time, to give Evidence [on His Majesty’s Behalf]. Hereof fail not, and make Return of your Doings therein unto the said Court. Dated at ​“Boston” the ​“16th” Day of ​“January” [in the Year ___ of his Majesty’s Reign]. Annoque Domini 17“77″: Ezek.l Price Cler[ic]’.

The Bedford Whaling Museum lists only three navigational instrument makers in Massachusetts from the late 1770s in their archives: Josiah Muller, Joseph Halsey and John Dupee. Silvio A. Bedini, who made a considerable study of the​‘Early American Scientific Instruments and Their Makers’, in his book of 1964, points out that the earliest manufactures in the colony were based in and around Philadelphia, which is the case with clockmakers David and Benjamin Rittenhouse and the Chandlee family.

docketed on verso: ​“Suffolk SS. By witness of this receipt I have the Body of the witness’s named Daniel Halsey before the Hon.ble Court to answer to the witness’s complaint and [?]summynd the Witness. John Wells, Constable”. 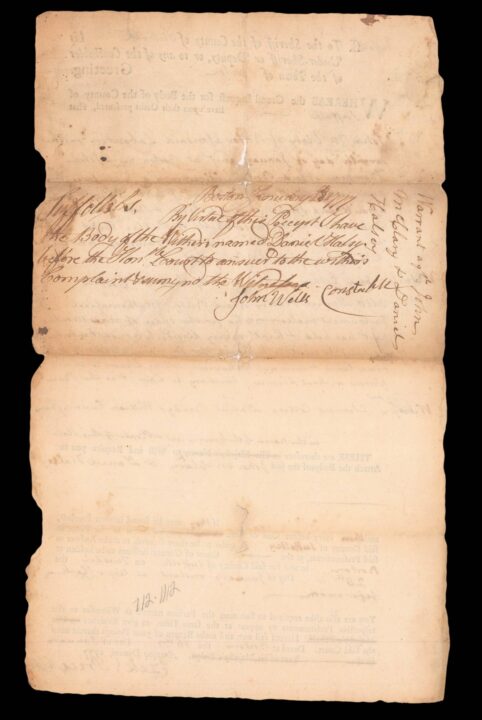 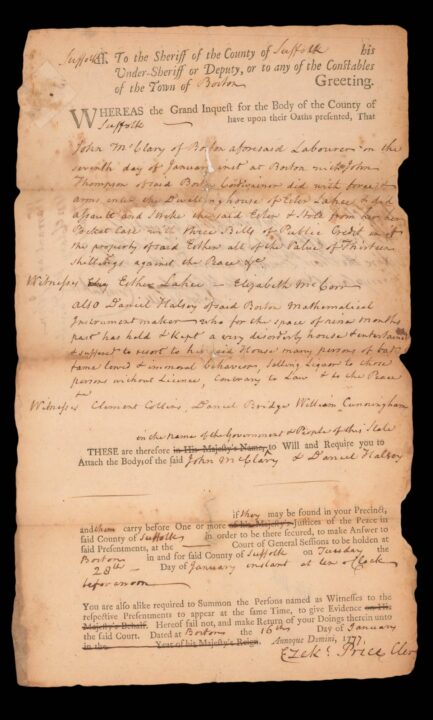 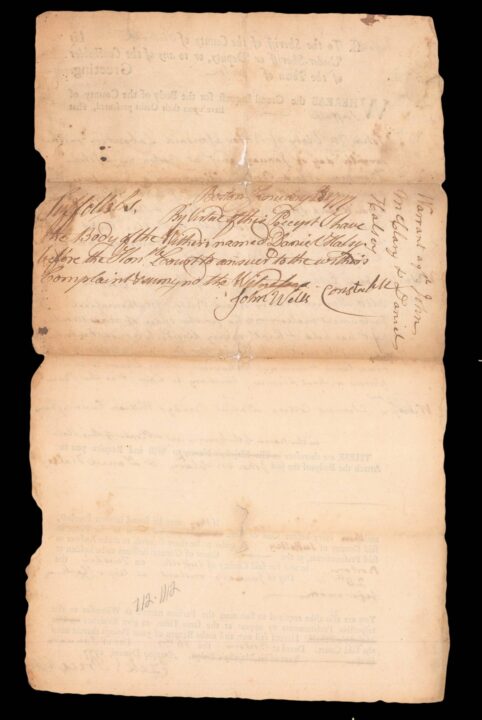