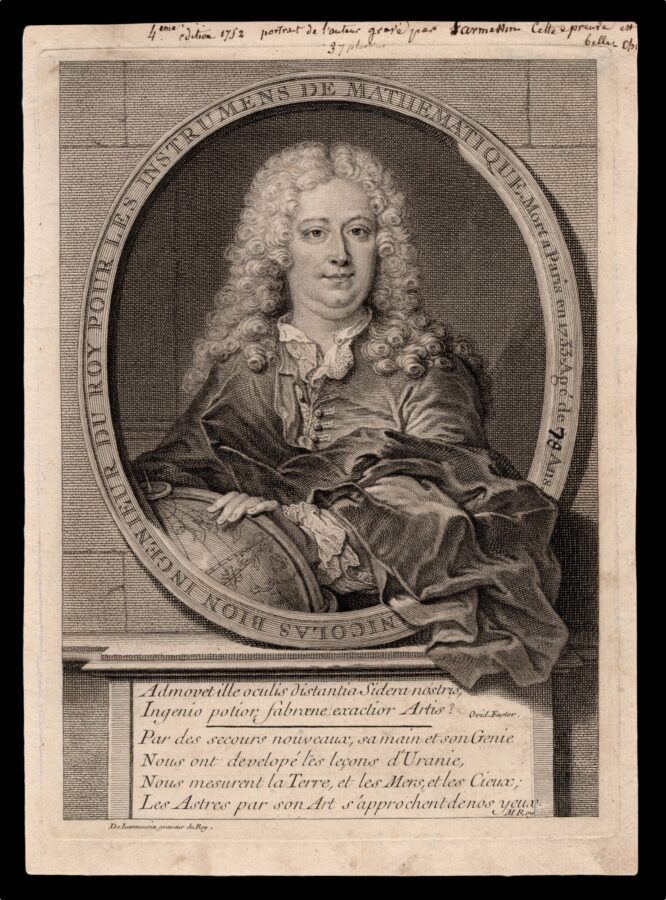 Nicholas Bion (1652–1733) was a French instrument maker, map publisher and author, who was active at the quai de l’Horloge a l’enseigne du Soleil, Paris. His most notable work was the ​‘Traité de la construction et des principaux usages des instrumens de mathématique’ (1709), perhaps the most important book on the use of scientistic instruments of the eighteenth century; it was published in English in 1723 as ​‘The Construction and Principal Uses of Mathematical Instruments’. His expertise won him the position of engineer to the King, for whom he produced a range of instruments. Bion’s success was made evident in his will, which left an estate worth an estimated 66,000 livres.

Some time after his death, Bion’s portrait was engraved by Nicolas de Larmessin, a French printmaker who specialised in portraits. The engraving shows Bion seated besides one of his globes, set within an oval frame atop a plinth. On the plinth two lines of Latin are attributed to Ovid, although probably paraphrased: ​“Admovet ille oculis distantia Sidera nostis, Ingenio potior, fabraene exatior Artis?” (‘He himself brings the distant Stars to our eyes, a genius most powerful, an artist most exact’). There follow four lines of French lauding Bion’s contributions to astronomy.