A fine pair of views of London and Westminster from ​‘Nouveau Théâtre de la Grande Bretagne’ published by David Mortier.

The Prospect of the City of London shows the city as seen from a high point on Southwark and it extends from St Clements Church to the Tower of London. The dome of St Paul’s Cathedral and the many church towers dominate the skyline; London Bridge links the two shores and many ships travel on the Thames.

The Prospect of Westminster stretches from Parson’s Green in the west to Temple in the east, including in the background the country around and the towns of Kensington, Hampstead and Highgate. Houses and landmark buildings are shown in elevation, as well as smaller details such as trees and people. The River Thames spreads throughout the foreground, populated by numerous ships transporting merchandise or people. The most important places of interest such as churches and famous houses are named in the key and these include Westminster Abbey, the Parliament, Buckingham House, St James’s Park, St Martin’s Church and Somerset House.

Johannes Kip (1653–1722) was a draughtsman, engraver and print dealer. He briefly apprenticed with the printmaker Bastiaen Stopendaal in Amsterdam before setting up his own business. Shortly afterwards he followed William and Mary to London, where he settled in St. John Street and conducted a thriving printselling business. 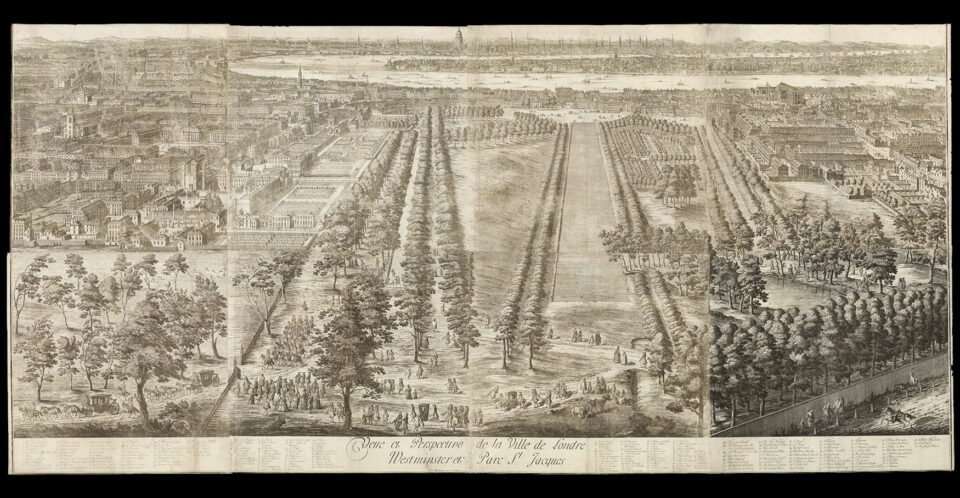 ​“The largest view of London ever to be published”

Johannes Kip after 1726].
A Prospect of the City of London, Westminster and St. James’s Park.