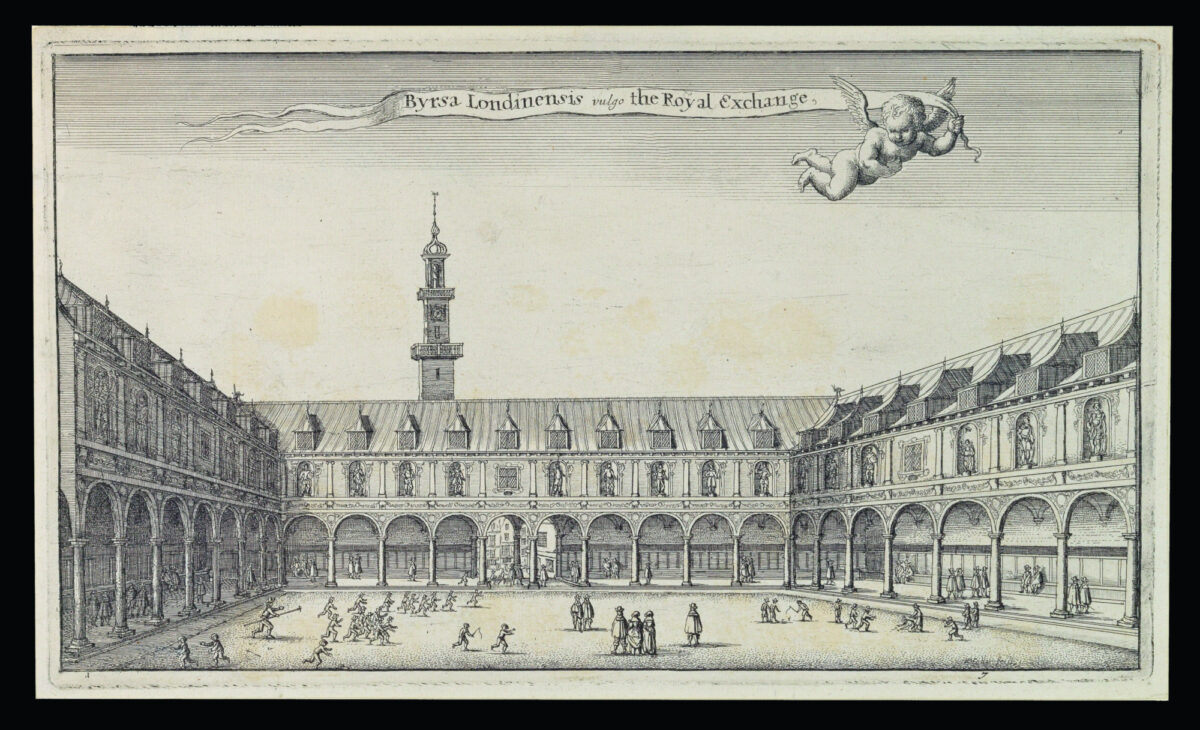 Byrsa Londinensis vulgo the Royal Exchange [and] Castrum Royale Londinense vulgo the Tower [and] Piazza in Conventgarden [and] S. Marie Ouer’s in Southwarke

During the mid-1640s, Hollar produced a series of four views of notable locations in the City of London. The first focuses on the Royal Exchange, which Queen Elizabeth I officially opened on 23rd January 1571, granting it the licence to sell alcohol and valuable goods. Based on the Antwerp bourse, it was designed to be the trading centre of the City of London.The original building, built and largely funded by Sir Thomas Gresham, was destroyed in the Great Fire of London in 1666, but its image is preserved in the present print by Wenceslaus Hollar.

Flemish-Italianate buildings surround an open courtyard used for trading, with covered porticoes used in the event of rain. The square bell tower, which rises up in the background, was surmounted with a grasshopper, although this detail is not particularly distinct on the view. The first floor has niches where statues stand between the pilasters, and only one window in the centre of each side. Figures stand or walk beneath the arcades and in the court, with one man chasing some small boys with a rod. The title is presented above in a banner held be a putto.

The second print shows the Tower of London. During the Civil War, the Tower was held by Parliament, along with its important arsenal of gunpowder and artillery which enabled Parliament to equip an army of 20,000. The Tower itself, however, did not play an important role in the conflict, although it was during the subsequent Commonwealth that the first permanent garrison was installed there. Hollar’s print of the Tower, made towards the end of the war, is viewed from across the River Thames, with Traitor’s Gate visible to the front. The foreground of the image is crowded with pinnace-rigged ships, rowing boats and cargo vessels on the waters of the Thames, as well as figures walking and working on the wharf.

Third if Covent Garden. The first recorded use of this name is from a document of 1515 that details how the local Abbey granted a lease of the walled garden. Over the following centuries the site underwent many developments, for example in 1630 when Inigo Jones was commissioned to design and build a church and three terraces of buildings around the large piazza. The external houses initially attracted London’s elite, although the invasion of coffee houses, taverns and prostitutes during the mid-seventeenth century eventually drove them out. It is this period of expansion depicted by Hollar in his view of the ​“Piazza in Conventgarden”, published in 1647. It shows the market from the west looking at the facade of the Jones’ church. Short posts delineate the square itself, although there does not seem to be any specific activity associated with it at this time. Figures are passing through the piazza by foot, on horseback and by carriage.

Finally Hollar presents what is now Southwark Cathedral, presenting the church’s impressive facade from the south, with numerous stained glass windows and a high tower at the centre. It was in fact from the top of this tower that Hollar drew his great panorama of London in the same year. Thought to have long been a nunnery dedicated to the Virgin Mary, the site was consecrated in 1106 as an Augustinian priory. The site was later re-dedicated as the Church of St Saviour’s after the dissolution of the monasteries, before eventually being established once again in the name of St. Mary. The name given by Hollar, ​“S. Marie Ouers’ ”, refers to the fact that it was considered to be ​‘over’ the river, being situated on the south bank.

In the foreground, people are gathered in the cathedral’s courtyard, perhaps preparing to enter, while in the background the many buildings of the city can be seen across the river, captioned ​“London”. The building to the left of the cathedral may be Winchester House, although Hollar does not identify it by name.