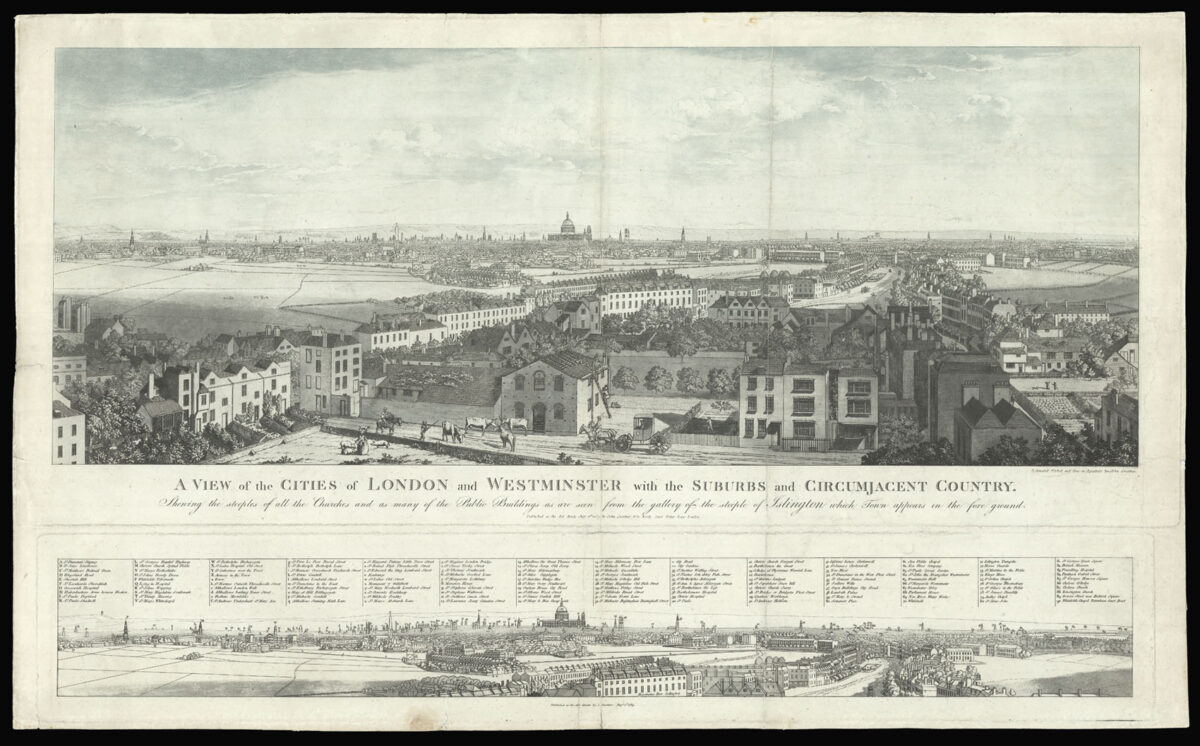 A View of the Cities of London and Westminster with the Suburbs and Circumjacent Country Shewing the steeples of all the Churches and as many of the Public Buildings as are seen from the gallery of the steeple of Islington which town appears in the foreground.

Jan Swertner, born in Harlem in the Netherlands in 1746, was a Moravian minister. In the handbill described below he refers to himself as ​‘one not professionally an artist’. The prospect, nevertheless, is highly professional and, in the selection of viewpoint, novel. Rejecting the picturesque composition beloved of contemporary British artists, in which ​“the Cities themselves, by being so far removed from the back Ground become Objects of secondary Notice”, he chose ​“after much Trial and Search” the lantern of St Mary Islington from which to make his drawings. From here the townscape was free of picturesque foreground detail; and in place of tree stumps and gesturing staffage Swertner provides us with a view of a North London suburb at a time of change and development.

The foreground detail is not described in the key. Across the immediate foreground is Church Street (now Gaskin Street). In the centre tilers are depicted completing the roof of the chapel for the dissenting Islington blacksmith, John Ives. Later the building would be used by Lady Huntington’s Connexion, and later still as a school. Church Street links Upper Street on the right to Lower Street (now Essex Street) on the left. Branching off Lower Street is Colebrook Row. Nearby are Bird’s Buildings, where at a later date the prolific London topographical artist, Thomas Hosmer Shepherd, would live. Mid-centre is Islington Green and the backs of the buildings of Old Paradise Row. Camden Street can be identified to the east of it. The Old Pied Bull, said to have been the home of Sir Walter Raleigh, is on the right in Upper Street.

A handbill issued by Swertner announcing the prospect’s publication (copy in the John Johnson Collection, Bodleian Library) informs potential purchasers that it could be obtained from ​“the Publisher, No. 10 Nevils Court, Fetter Lane; Mr. Nichol, No. 58 Pall-Mall; Mr. Faden, No. 487 Strand; Mr. Stockwell, 191 Piccadilly; Mr. Wilkinson, No. 58 Cornhill; Mr. Cary’s, the Corner of Arundel Street, Strand; Mr. Harris, No. 3 Sweetings-Alley; And other Printsellers.’ Prices quoted are ​’10s.6d. — Proof Impressions, 16s. — Coloured, £1.1s. — Highly finished, in Colors, from the original Draught, by the Publisher, £1.11s.6d.” The handbill recommends purchasers either to frame the view and key-block as one, or to mount the key on a panel attached to sliders at the back of the frame, that could be slid out or pushed back in again at pleasure.

The print was reproduced as London Topographical Society Publication No. 124, printed by Curwen Press, and issued as an extra publication to members in the Society’s centenary year, 1980.