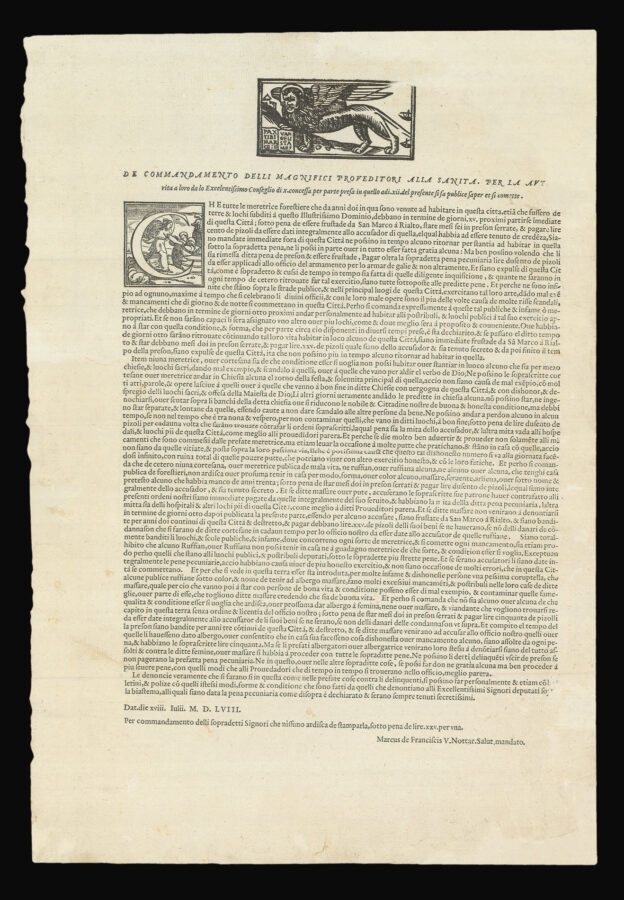 An order banning all foreign prostitutes from Venice

A fascinating survival of an official order issued by the city of Venice banning all foreign prostitutes from the city.

The ban states that:

​“All foreign prostitutes who have moved to this city from places under this illustrious dominion, must leave immediately and within the next fifteen days; the penalty is the lashing from San Marco to Rialto; six months in prison; and a fine of 100 pizoli to be paid to the plaintiff […]”.

The text goes onto prohibiting all local courtesans and prostitutes from residing near a church or a sacred place; from going to church on feast days; from sitting or kneeling in a church; and they are only allowed to go to Confession between nine in the evening and sunset, or the penalty is a fine of 200 pizoli (or piccoli, a low value coin).

Prostitution in Venice was well tolerated, though kept under control. The city was an international centre for trade and culture, and it attracted many foreign merchants and pilgrims, who enjoyed various types of entertainment, including those of the flesh. Courtesans were obliged to reside in specific areas, such as the ​‘Castelletto’ quarter and San Cassiano, near Rialto, and were made to comply with strict rules issued by the Republic of Venice, such as those stated in the present order.

The Provveditori alla Sanità, or Health Commissioners, were a magisterial body created in 1485 to safeguard the State’s public health against the plague and other diseases arriving from afar. Their ruling was equal to that of the Senate, and their jurisdiction extended to capital punishment. Their areas covered physical places such as lazarets, streets, canals, and wells; the food trade and medicines; and professions such as physicians, hoteliers and prostitutes.

The Biblioteca Nazionale Marciana, Venice, lists similar proclamations by the Provveditori alla Sanità, the earliest of which is dated 1577. Only four, dating from 1628 to 1630, relate to the matter of prostitution in Venice.