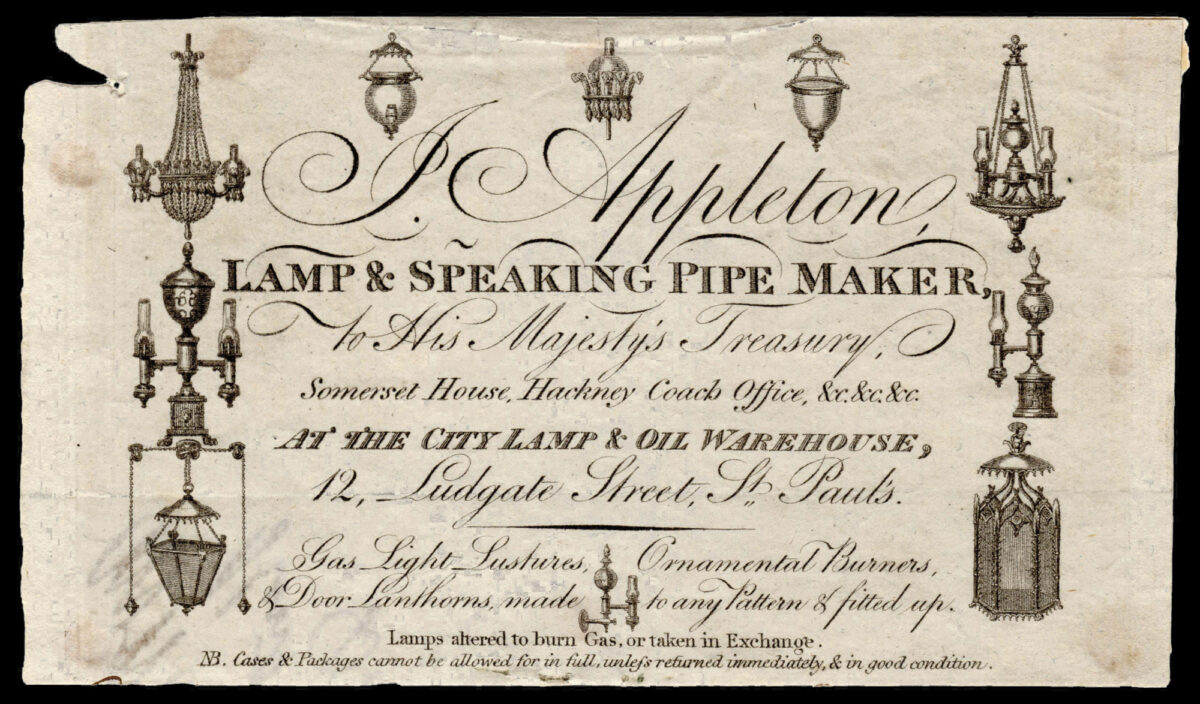 L is for Lamp Maker

All sorts of Lamps for the use of Halls, Chambers [and] J. Appleton Lamp & Speaking Pipe Maker [and] French Lamps with Improved Spiral Burners. to His Majesty’s Treasury, Somerset House, Hackney Coach Office, &c. &c. &c. At the City… Gas Light Lustres, Ornamental Burners & Door Lanthorns, made to any Pattern & fitted up. Lamps altered to burn Gas, or taken in Exchange. NB. Cases & Packages cannot be allowed for in full, unless returned immediately & in good condition.

Set of three trade cards of John Appleton, purveyor of lamps, fixtures and various lighting accoutrements, who was active in London during the early decades of the nineteenth century. Appleton first appears in The Post-Office Annual Directory of 1812, where he is listed on account of his ​“Patent Lamp and Oil Warehouse” and also as a ​“Speaking Pipe-maker”. Such listings continue to appear in the records throughout the following two decades in publications such as Kent’s Original London Directory of 1823 and a House of Lords report of 1829, which records that Appleton had paid £108 for the production of patent lamps in 1820, and £73 the following year.

On September 25, 1824 the’ London New Times’ featured an advertisement announcing ​“A GREAT REDUCTION in the PRICES of LAMPS and LAMP OILS”. Appleton then ​“begs to inform his Friends and the Public in general, that he has now on sale a large assortment of the most admired and. improved One, Two , and. Three light Patent Lamps, which are at this time so much in use for lighting halls, staircases, dining rooms, drawing rooms, counting houses, banking houses, public offices, churches, chapels, ball rooms, publication places &c. where a brilliant light is required”. Indeed, the present trade card lists a number of establishments supplied by Appleton, including ​“His Majesty’s Treasury, Somerset House, Hackney Coach Office, &c. &c. &c.”.

The trade card, which lists Appleton’s address, a short list of products and a few details about payment and delivery options, is decorated with intricate engravings of different types of lamps and light fittings. It is unclear which of these, if any, is of Appleton’s patent lamp, but they certainly demonstrate his impressive array of stock. Unfortunately, the ​“speaking pipe” does not feature among these illustrations.

First suggested by Francis Bacon in 1672, the speaking pipe was later developed the French monk Dom Gauthey in 1782, with financial support from none other than Benjamin Franklin, and British philosopher Jeremy Bentham also proposed their inclusion in his hypothetical panopticon. By the early nineteenth century, speaking pipes or voice pipes were being implemented in military telecommunications, but also in homes, where they were generally referred to as speaking tubes. They consisted of two cones, one shaped to fit a speaker’s mouth and the other flared to amplify sound, connected by a metal pipe. This system gradually took over from the elaborate system of remotely controlled hand-bells previously used to communicate between different floors. No doubt customers able to buy Appleton’s ornate lamps to adorn their homes would also have been interested in this new and more convenient method of summoning their servants.