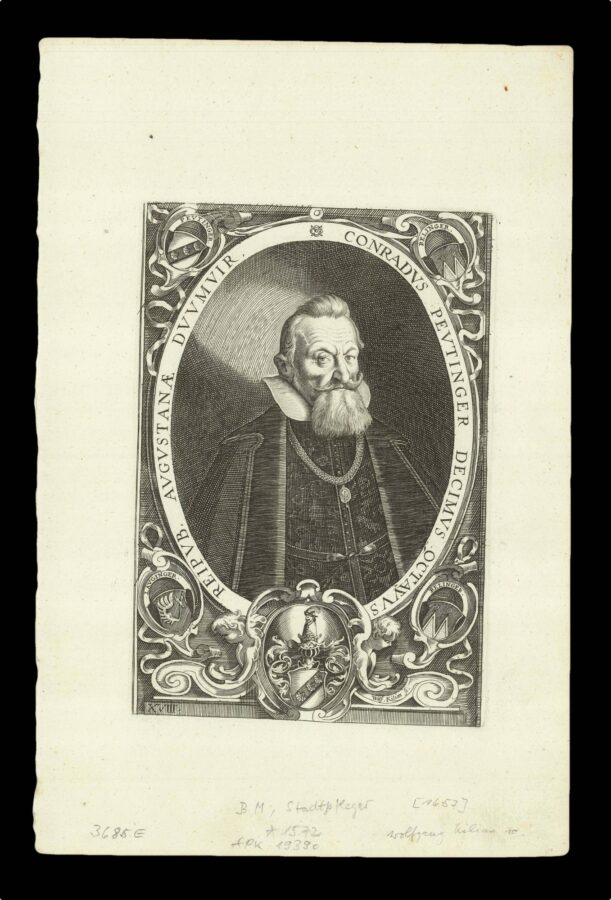 Born in Augsburg 1465, Konrad Peutinger (1465–1547) acquired all the accolades of the Renaissance man, studying at the prestigious Italian universities of Padua and Bologna, holding several official positions in his native country, serving as counsellor to both Emperor Maximilian I and then Charles V, and publishing numerous written works of his own. Peutinger was passionate about all areas of antiquity, and these interests resulted in the eponymous ​‘Tabula Peutingeriana’, a thirteenth century map depicting the Roman Empire’s extensive network of roads, which stretched from the British Isles to India. The ancient map had been discovered in 1494 by Konrad Celtes, who handed it over to Peutinger for publication.

Around 1660, Wolfgang Kilian, a member of the notable German family of engravers, produced a portrait of Peutinger, which is quite remarkable in that it bears no resemblance any of the earlier images of the antiquarian, who is typically depicted as a rather fat man with chin-length hair and no beard, rather than the refined bearded gentleman shown by Killian. However, there is no doubt that it is the same Peutinger meant, as he is described in the oval frame that surrounds his image as a ​“Reipub. Augustanae Duumvir” in reference to his position as a senior official of the government of Augsburg (Augusta Vindelicorum). Each corner of the frame is ornamented with a crests surrounded by decorative motifs, with Peutinger’s own crest in the lower centre.