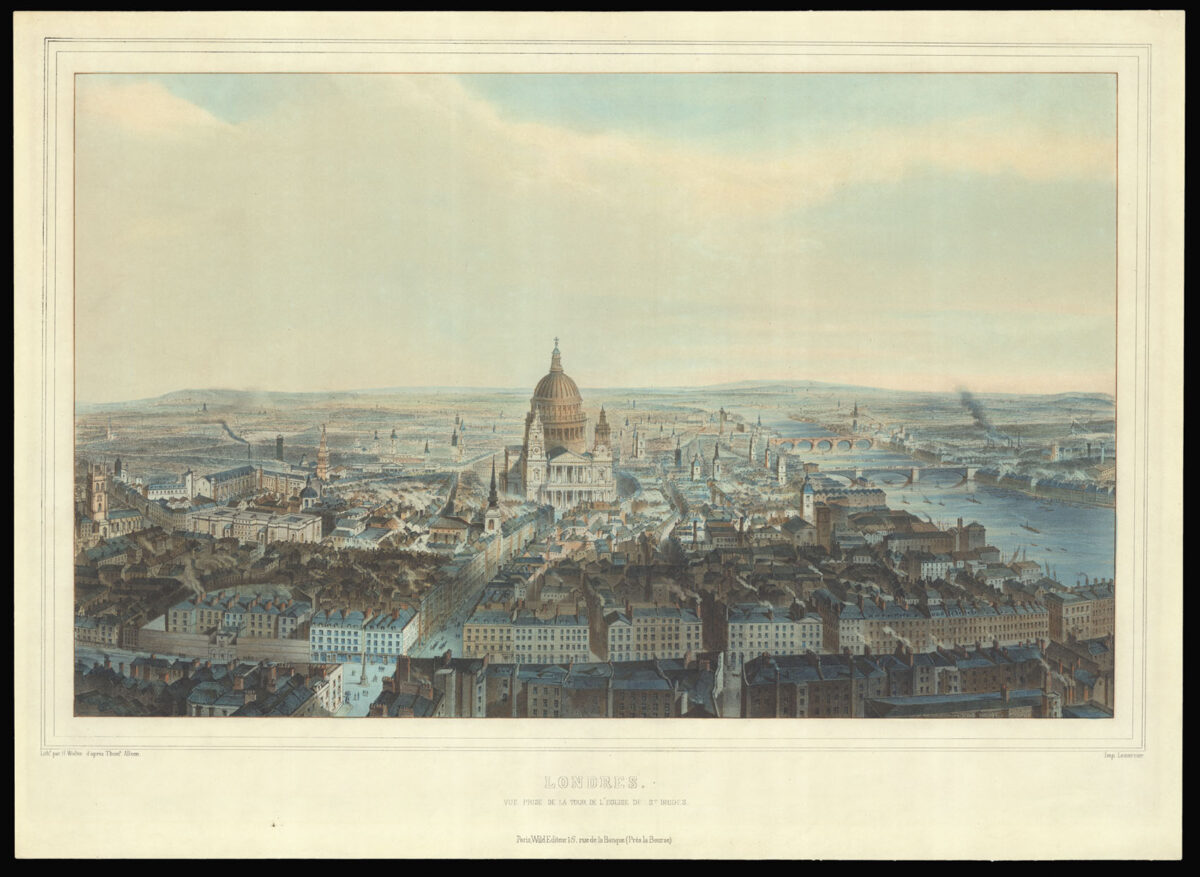 Key to the City

The first state of the French edition of this bird’s eye view of the city, accompanied by two companion steel engraved key-blocks.

Allom’s drawing for this print was exhibited at the Royal Academy in 1844. It was reviewed in The Builder (1844). Curiously J.T. Willmore (one of J.M.W. Turner’s engravers) exhibited a drawing of the same scene and in the same exhibition. The Art Union’s reviewer described Allom’s drawing as ​“a maze of tiles and roofs, garret windows, and chimneys, with the upper part of St. Paul’s, and the steeples of the sundry churches rising out of the mass of deformity…”, but confessed he had ​“an utter aversion to all such barbarous, unartistic representations as bird’s-eye views” ( June 1844). The same journal carried a kinder review of the engraved version of the image and of a companion engraving: “…Their accuracy as to minute detail is absolutely wonderful; while as a whole the effect is singularly fine. It is positively marvelous to note not only each individual street but each separate house exhibited with remarkable fidelity… Mr. Allom has by these fine productions extended his well-earned and merited fame” (April 1846).

The Fleet Prison, the outer walls of which were demolished in February 1846, is still shown on the image intact.

The view is offered here with the rare key sheets to Allom and Walter’s pair of views of London, one taken from the steeple of St Bride’s Church and one from the gallery of St Paul’s Cathedral, which give 100 and 185 references respectively. Together they show the City of London from two opposing viewpoints, with a numbered key of the main buildings underneath, including churches and places of business. The British Museum has a copy of the key-block to the view of the Steeple of St Brides Church, and the Guildhall Library has a key, with numbers but without place names, presented by J.H. Le Keux. It is, therefore, likely that he was the engraver of both keys.

Thomas Allom (1804–72) was an architect and artist. He trained at the Royal Academy, and was one of the founder members of the Institute of British Architects in 1834. He specialized in topographical scenes.

The steel plate for the engraving was later acquired by the Fleet Street map and globe maker, G.F. Cruchley. It was auctioned at the sale of Cruchley’s stock at Hodgson’s, 16 January 1877.