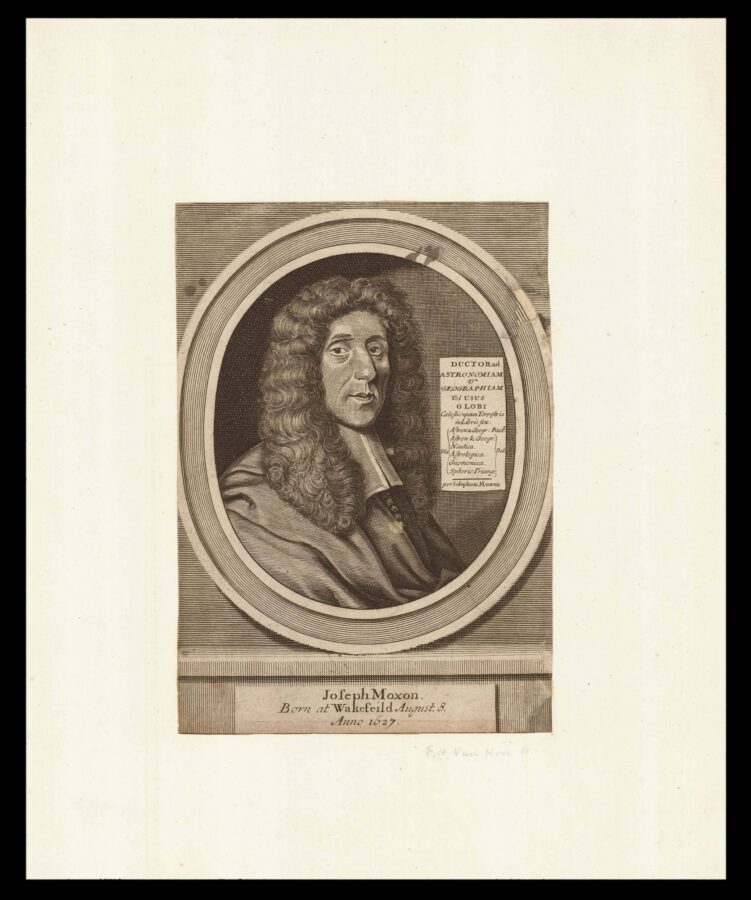 By HOVE, Frederick Hendrick van; after, 1699

The son of an English printer, Joseph Moxon’s (1627–1691) formative years were greatly influenced by a visit taken with his father to the Low Countries to witness Bible production first-hand. This was undoubtedly an experience that led by Joseph and his brother James to become printers themselves, initially specialising in mathematical and scientific texts. After visiting Amsterdam as an adult to further study printing, Moxon returned to England with Blaeu’s recently published handbook of globes, which he translated into English as ​‘A tutor to astronomy and geography’ (1659). Later that year he published an original manual, creatively entitled ​‘A tutor to astronomie and geographie’, which was specially designed for an English market rather than Dutch, and became Moxon’s most popular work relating to globes.

The frontispiece to the 1699 edition of the work, shows a bust of Moxon in three-quarter perspective, wearing robes, a large square collar and a long wig. The portrait is set within an oval frame captioned with the subject’s name and date of birth. An unfurled scroll inside the frame contains further information about his trade in Latin. The first edition of the engraving had been produced in 1686, and was by Frederick Hendrik Van Hove, a Dutch engrave who lived in London from around 1660 to 1692. No changes have been made on the present example.