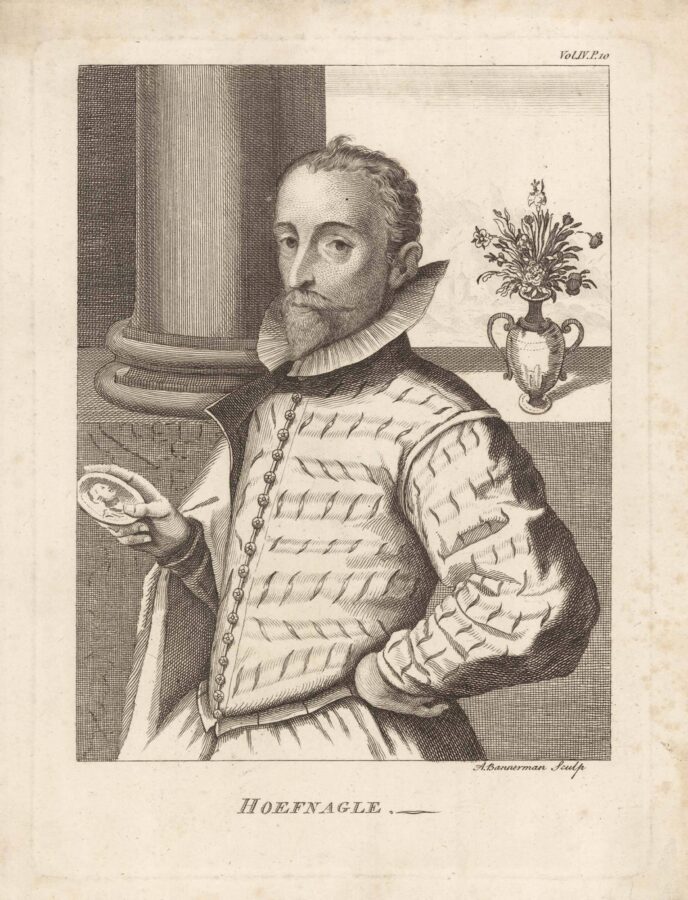 The son of a diamond dealer, Joris Hoefnagel (1542–1601) received a thorough education in the arts in his early years, and as a young man trained as an artist in Antwerp. During the following decades he travelled around Europe meeting many notable figures including Abraham Ortelius, with whom he travelled through Germany and Italy. Hoefnagel was a very versatile artist and is recognised as one of the last great manuscript illuminators. He also made a major contribution to the development of topographical drawing, with his drawings serving as models for the later works of Ortelius, Hogenberg and Braun.

Hoefnagel’s portrait, a bust in three-quarter perspective, was engraved by Jan Sadeler, of the eminent family of Flemish engravers, in 1592. In 1610, Hendrik Hondius I expanded Sadeler’s portrait to show Hoefnagel’s entire upper-body, his right hand on his hip and his left holding a cameo. Hondius’s portrait was copied in reverse by Scottish engraver Alexander Bannerman during the mid-eighteenth century for Horace Walpole’s ​‘Anecdotes of Painters’, a multi-volume based on the extensive notes of the successful publisher, George Vertue.