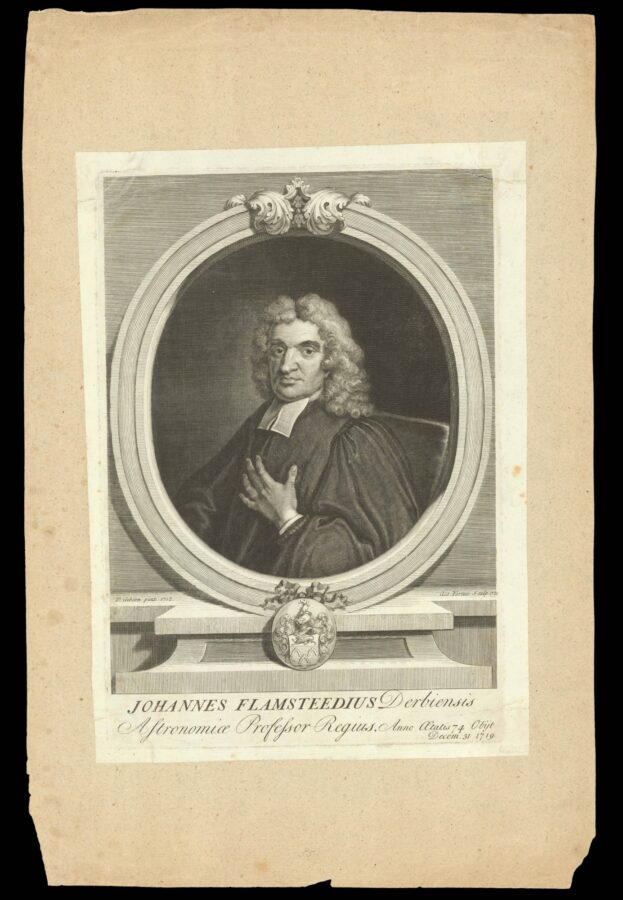 John Flamsteed (1646 — 1719) was best-known for compiling a 3,000-star catalogue, ​‘Catalogus Britannicus’, and a star atlas entitled ​‘Atlas Coelestis’, both published posthumously. Upon being made the first Royal Astronomer in 1675 by Charles II, Flamsteed was charged with ​“rectifieing the Tables of the motions of the Heavens, and the places of the fixed stars, so as to find out the so much desired Longitude of places for Perfecteing the Art of Navigation”. Although the longitude problem would not be solved for another sixty years, Flamsteed’s works were a great contribution to seventeenth century astronomy.

The present half-length portrait shows Flamsteed sitting with one hand at his breast in a sign of sincerity and honour, dressed in an academic gown with bands at his neck, and wearing a peruke. It was published as an engraving in 1721 by George Vertue, one of London’s most successful publishers who issued over 20,000 prints over the course of his career. It is drawn after a 1712 painting by Vertue’s master, the portraitist Thomas Gibson.