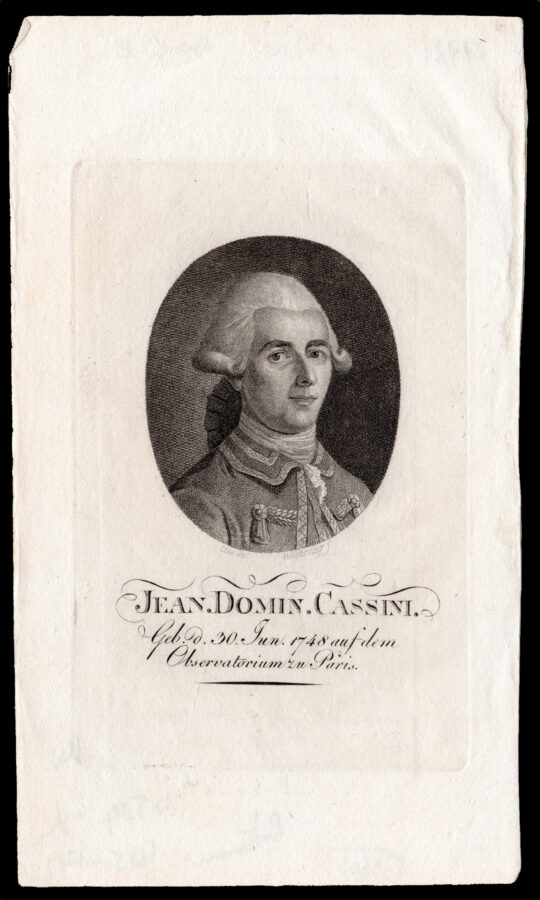 Jean-Dominique Cassini (1748 –1845) was the last in the line of prominent French astronomers originating with his great-grandfather, also named Jean-Dominique Cassini. Born at the Paris Observatory, Cassini was raised to be an astronomer. In 1770, Cassini published an account of a voyage to America that he had undertaken 1768 in order to test Pierre Le Roy’s watches at sea. In 1783, he made a proposal to the Royal Society for a trigonometric survey connecting the observatories of Paris and Greenwich for the purpose of better determining the latitude and longitude of the latter. His proposal was accepted, and the results of the subsequent Anglo-French Survey were published in 1791. As well as fulfilling his inherited role as director of the observatory, Cassini also completed his father’s map of France, which served as the basis for the ​‘Atlas National’ (1791), showing France in departments. Hostilities from the National Assembly led to Cassini’s resignation in 1794 before a seven-month stint in prison, from which he luckily escaped with his head.

Cassini appeared alongside some of his forebears in an issue of Zach and Bertuch’s ​‘Allgemeine geographische Ephemeriden’ in 1808, with his portrait similar engraved by Westermayer after Cless. Showing Cassini is a short powdered wig with ponytail, and smartly dressed with a lace cravat, the engraving also notes his date and place of birth.